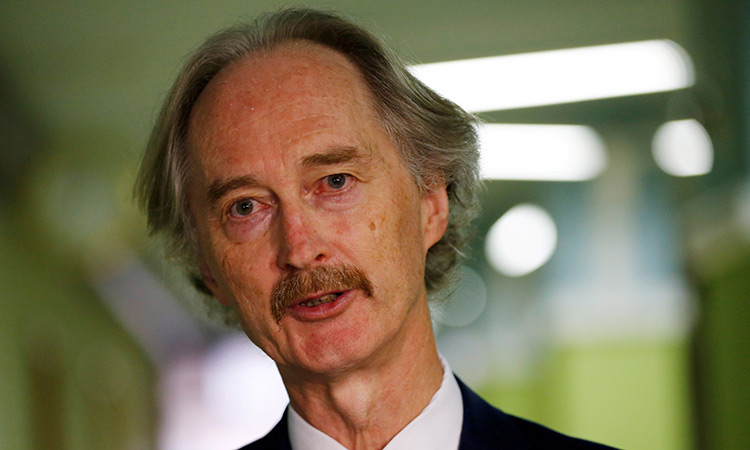 The UN special envoy for Syria said on Monday that the convening of a committee to draft a new constitution for Syria on Oct. 30 "should be a sign of hope for the long-suffering Syrian people" — but it will matter only if it becomes a step out of the more than eight-year conflict.

Geir Pedersen told a UN Security Council meeting on the sidelines of the annual gathering of world leaders at the General Assembly that the committee alone cannot resolve the conflict, saying that actions to de-escalate violence and move toward a nationwide cease-fire "are absolutely essential."

Still, he said, the long-delayed agreement between Syria's government and opposition on the 150-member committee is significant because it marks "the first concrete political agreement" by the warring sides to begin to implement the June 30, 2012, roadmap to peace adopted by key nations.

"This can be a door opener to a wider political process that meets the legitimate aspirations of the Syrian people," he said.

Pedersen said seizing the opportunity won't be easy, however. "Syria remains in the gravest crisis, with violence and terrorism continuing, five international armies operating on its territory, appalling suffering and abuses, a deeply divided society, and a sense of despair among its people inside and outside the country," he said.

The UN envoy said "trust and confidence is almost non-existent" and the constitutional committee needs to be accompanied by other steps to build trust and confidence not only among Syrians but between Syria and the international community. As one measure, he appealed for action on the tens of thousands of people who remain detained, abducted and missing.

Pedersen cited the many difficulties to overcome: a humanitarian crisis in Idlib, the last rebel-held region in Syria, and other areas; terrorist groups that "continue to metastasize touching all Syrian communities"; frequent violent confrontations between international players; millions of Syrians displaced; and millions living in poverty.

The envoy urged the Security Council to unite behind "the revitalized effort" to implement the 2012 road map to peace with calls for UN-supervised elections once Syria has a new constitution.

Pedersen will facilitate the committee's meetings in Geneva, but he stressed that "the United Nations will jealously guard the Syrian-owned and Syrian-led nature of the process."

"Syrians, not outsiders, will draft the constitution, and the Syrian people must popularly approve it," he said, adding that how the popular approval will take place still needs to be worked out.

Under the agreement, the committee is to amend Syria's current 2012 constitution or draft a new constitution. It will have a 150-member panel, with 50 representatives each from the government, opposition and civil society, and a 45-member body with 15 representatives from each of the three parties.

Pedersen disclosed details of the 50-member civil society group, which was the hardest to agree on, saying they come from different religious, ethnic and geographical backgrounds and "hold a range of political leanings." Some live in Syria and others live outside the country, he said.

Nearly half of those in the civil society group are women, and about 30 per cent of the entire committee's 150 members are women, Pederson said.