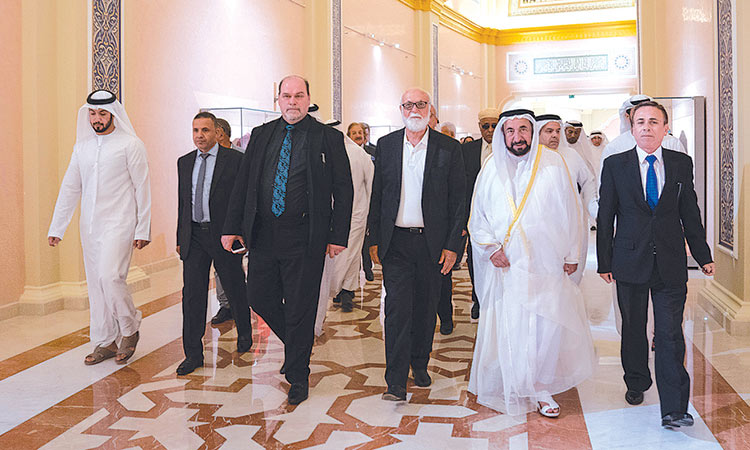 Sheikh Sultan told the guests, “We welcome you to the UAE and Sharjah, the incubator of Arab culture.” WAM

This came during His Highness’ visit to the headquarters of the Park and was briefed on the progress of the project, and followed part of the construction process, and listened to the supervisors and officials of the complex about the latest developments and techniques used in the implementation of the project, and the partnership between the Park and developed companies and academic institutions.

The complex heads explained to His Highness the Ruler of Sharjah during their tour that the complex was working to attract international companies specialising in the construction of buildings with three-dimensional printing techniques, as the first house is built with heritage architecture using this technology, which is one of the latest technologies of the Fourth Industrial Revolution related to construction.

Sheikh Sultan met  a number of research students from the College of Engineering at the American University of Sharjah and urged them to seize the opportunity of the existence of this complex and partnerships with leading research, technological and innovative institutions.

Sheikh Sultan received a number of senior Arab theatre artists, presidents of theatrical institutes and captains of artists, guests for the opening ceremony of the Sharjah Performing Arts Academy (SPAA) at the Dr Sultan Al Qasimi Centre for Gulf Studies.

Sheikh Sultan welcomed the guests, saying “We welcome you to the UAE and Sharjah, the incubator of Arab culture. We hope you will enjoy your stay with us. Your presence drives us to give more and strengthen our stand towards charitable cultural work.”

His Highness indicated in a speech Sharjah and its cultural work was not new, especially in the field of theatre.

He added, “In 1955 the theatre supported education through plays played by students of Al Qasimia School. The ticket revenues which amounted to an equivalent of Dhs3 million, were allocated to build additional classrooms to accommodate the growing numbers of students interested in learning.”

Sheikh Sultan added the Sharjah theatre never stopped giving by presenting everything in relation with people, reflecting their real life.

He affirmed, “The emergence of extreme ideas in the Arab world necessitated that we had to extend our cultural movement to all the Arab countries and covered all the cultural, intellectual and artistic aspects, including Poetry, Story, Novel, Arts, Theatre, etc.”

The Ruler of Sharjah added the theatre dedicated academy “is part of our effort to combat these extreme ideas. Education and training in the academy will not be limited to theatrical performance, but will be extended to include all the theatrical sciences, such as scripting, lighting, Costumes and music.”

The Ruler of Sharjah invited attendees to contribute to the sponsorship and selection of talented persons from all other countries, to study in the academy to serve the interest of the Arab Theatre, and to create an aware generation of academic theatre equipped with talent and knowledge, able to carry on.

Last week, Sheikh Sultan ordered to allocate a new building to the Emirates Institute for Banking and Financial Studies (EIBFS), near the Sharjah University City instead of its current headquarters that was built in 1983.

Expressing his thanks to the Ruler of Sharjah, Jamal Al Jismi, General Manager of EIBFS, has lauded H.H’s constant support for education in general and for EIBFS in particular.

“This grant is a continuation of Sheikh Sultan’s keenness to develop educational institutes and support seekers of knowledge in Sharjah,” Al Jismi noted.