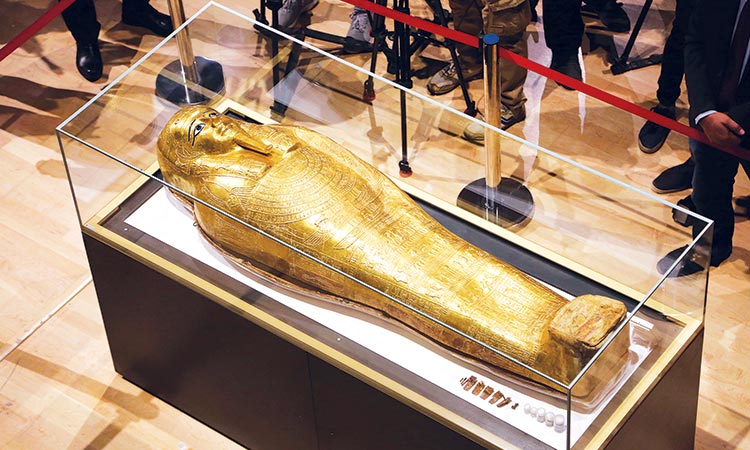 The golden coffin is seen at the National Museum of Egyptian Civilization in Cairo on Tuesday. Associated Press

Looted amidst the tumult of Egypt’s 2011 revolution, the golden coffin of priest Nedjemankh was unveiled on Tuesday in Cairo after its return from New York.

Standing at 1.8 metres, the fine gilded sarcophagus has gained notoriety, apart from for its historical value, for its role at the centre of an international trafficking ring.

Dating back to the Ptolemaic period (1st-2nd century BC), the ornate wooden coffin was designed for Nedjemankh, a high priest of the ram-headed god Heryshef.

The shimmering artefact adorned with gesso reliefs had been housed since 2017 in New York’s Metropolitan Museum, which purchased it from a Paris art dealer for around 3.5 million euros ($3.8 million).

But in February, a Met exhibition which named the high priest had to shut down after being informed the sarcophagus had been plundered by a multi-national trafficking ring.

It had been smuggled out of Minya in southern Egypt in 2011, the year that long-time autocrat Hosni Mubarak was toppled in a popular revolt.

It had then made its way to a Gulf country and Germany before landing up in France.

“I am very happy to have this piece back again in Egypt... We will know all the details about the theft later,” Mostafa Waziri, secretary general of the Egyptian Supreme Council of Antiquities, told reporters at the National Museum of Egyptian Civilisation unveiling.

Egypt has sought to promote its archaeological heritage in a bid to revive its vital tourism sector, which took a battering from political turmoil after the revolution.

Separately, the Iranian government said that nearly 1,800 ancient artifacts have arrived in Iran as part of the return of thousands of antiquities loaned decades ago to the University of Chicago.

The government website said the artifacts arrived in Tehran on Monday, accompanied by two academics from the university.

This is the fourth consignment of artifacts to have been returned since 2004. Other shipments were also made in 1948 and 1950.

Iran loaned the artifacts to the University of Chicago’s Oriental Institute more than 80 years ago for research, translation and cataloging after university archaeologists uncovered them in the 1930s at the site of the ancient city of Persepolis.

Another 17,000 artefacts from the initial loan remain in the US. Iran and the US have not had diplomatic relations since 1979.