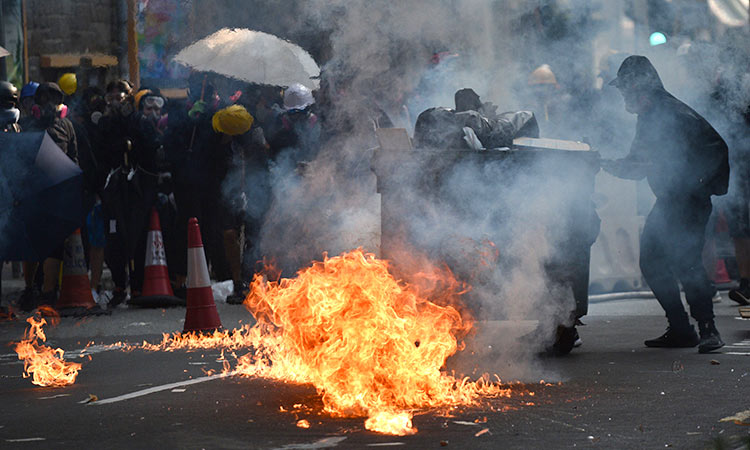 A Hong Kong police officer shot a protester in the chest with a live round on Tuesday after his unit was attacked by demonstrators during sustained clashes in the city, a police source said.

"An officer discharged his firearm after coming under attack and a protester was struck in the chest in Tsuen Wan district today," the source said, requesting anonymity.

A Hospital Authority spokeswoman told AFP that 15 people had been admitted to hospitals across the city following Tuesday's clashes, one of whom was in a critical condition at Princess Margaret.

She would not confirm if the critical patient was the man who had been shot. 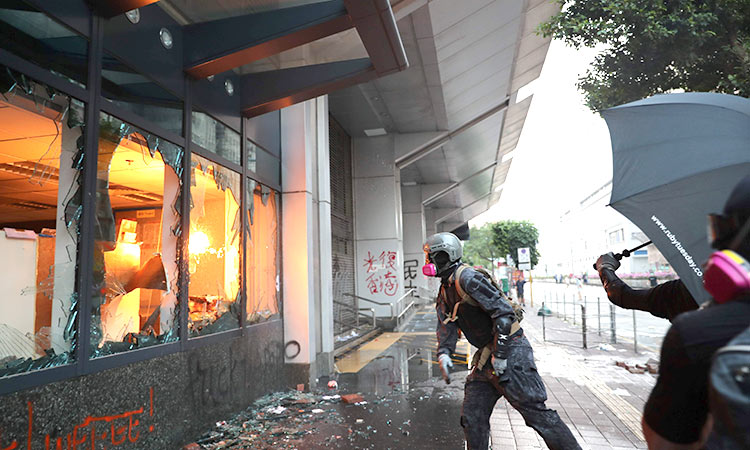 Protesters trash a local government office during a demonstration in the Sham Shui Po area in Hong Kong on Tuesday. AFP

Two videos posted online showed the shooting and its aftermath, which took place in Tsuen Wan, a district where hardcore protesters had clashed with police throughout the afternoon.

Some half a dozen riot police can be seen clashing with around 12 masked protesters, some of whom were using umbrellas and metal poles to strike the officers.

One officer runs into frame with his sidearm drawn.

He kicks a protester before firing at near point black range into the chest of a protester with a metal pole in his hand.

An gunshot can be heard as the pistol rears upwards.

The protester stumbles backwards and then falls over a police officer who has been knocked to the ground as the rest of the demonstrators run away.

Footage filmed shortly afterwards by local broadcaster Stand News showed police officers treating the prone man who had an oxygen mask on his face and his t-shirt cut open, traces of blood on his chest.

Paramedics later arrived on scene and placed the man, who was conscious, on to a stretcher.