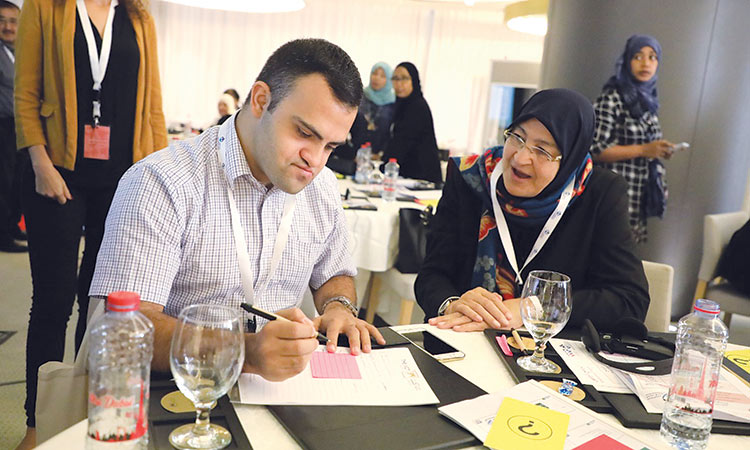 SCHS organised this summit with the participation of 14 self-advocates accompanied by their supporters and nine mothers.

A large number of people including people of determination, teachers and trainers have attended the three-day Self-Advocates Summit. It was the first time the summit was held in the UAE and organised by the Sharjah City for Humanitarian Services (SCHS).

The concluding session was attended by Sheikh Salem Bin Abdul Rahman Al Qasimi, Head of Sharjah Ruler’s Office, and witnessed the activities of Self-Advocates Summit that SCHS and Inclusion International for Middle East and North Africa (MENA) had organised under the title ‘One Step Closer’.

SCHS organised this summit with the participation of 14 self-advocates accompanied by their supporters and nine mothers.

Sheikha Al Qasimi, Representative of Inclusion International for Middle East and North Africa, and self-advocate Salma Al-Tabbakh from Egypt who is a member in the Board of Directors of Inclusion International, were the instructors in the summit. At the end of the training programme, Sheikh Salem Bin Abdul Rahman Al Qasimi and Mona Abdel Karim, Director of SCHS, distributed graduation certificates on self-advocates.

A number of self-advocates delivered speeches during the closing ceremony of the summit. Sheikha Al Qasimi was very happy with the results and outcomes of the training programme.  She confirmed that the remarkable interaction of self-advocates is the best proof of their desire to reach a stage of independent living and demand their rights and the rights of their peers from persons with disabilities in every area of life.

She said, “Discrimination represents the biggest challenges, which persons with disabilities face. In order to have an advanced society, everyone must fight discrimination by contributing to the success of the integration process throughout the provision of equal work opportunities and grant social participation without negative misconceptions.”

Al Qasimi talked about the importance of training teachers and members of society on sold foundations of dealing with persons with disabilities and raising community awareness of their issues, rights, and abilities.

For her part, self-advocate Salma Al-Tabbakh said that what made the Leadership Development programme distinctive is that the trainers and participants are self-advocates. This is the core of the movement calling for the independence of persons with disabilities in making decisions of their own.

Mona Abdel Karim, SCHS was the first to incorporate self-advocacy for persons with intellectual disability in UAE in January 2009. At that year, SCHS organised a conference about self-advocacy, in collaboration with Parents of Disabled Students in Emirates Association, currently (the Association of Persons with Disabilities Families).

Since the beginning, SCHS encouraged families of persons with disabilities to look after their children, treat them well, consider their feelings, and develop their ability to defend their rights. In addition, SCHS encouraged parents to learn about self-advocacy, which their children cannot have unless they put their trust in them, allow them to become independent, and integrate them into society.

In addition, Mona mentioned the training programme for supporters and mothers, which contained a group of necessary skills required for supporters to act efficiently.  It aimed at increasing their knowledge and culture, which contributes to raising the ability of a self-advocate to make the right decisions and therefore activate their role as self-advocates and enabling them to work within their societies.

Notably, the recreational programme SCHS presented to families during the four days of the summit aimed at providing psychological and moral support for the mothers of self-advocates, increase their ability to continue presenting support for their children, share experiences and consolidate cooperation and friendship between each other.