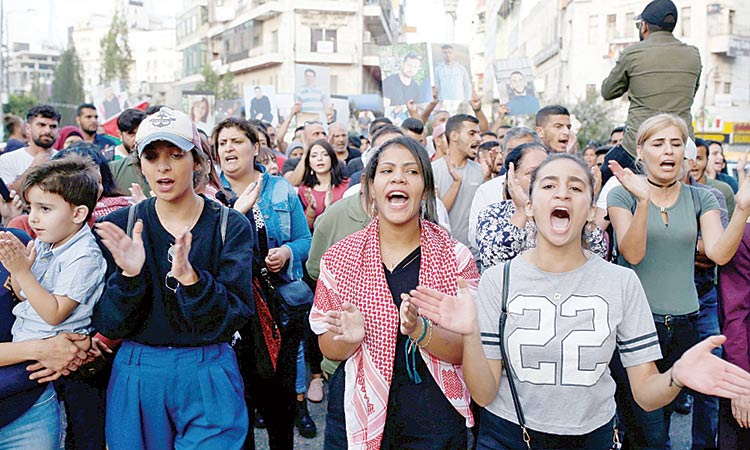 Palestinian demonstrators carry portraits of relatives in Israeli jails during a demonstration in Ramallah on Sunday. Agence France-Presse

An NGO accused Israeli security forces of torturing a Palestinian arrested on suspicion of leading a cell allegedly behind a West Bank bomb attack that killed an Israeli teenager.

Israeli police and the Shin Bet domestic security agency said they had arrested three members of the Popular Front for the Liberation of Palestine several weeks ago for the Aug.23 bombing.

The explosion near a spring close to the Jewish settlement of Dolev, northeast of Ramallah in the occupied West Bank, killed 17-year-old Rina Shnerb and wounded her father and brother.

Shin Bet identified the cell leader as Samer Al Arbeed. It said the cell “was preparing other attacks when the arrests occurred, notably gun attacks and a kidnapping.”

On Sunday, Palestinian prisoner support group Addameer said that Arbeed was hospitalised after suffering a “serious health deterioration due to torture and ill-treatment during interrogations.”

According to a statement by Addameer, Arbeed was “harshly beaten” by the Israeli police who arrested him.

Arbeed suffered several broken ribs as well as “severe kidney failure,” according to his lawyer, cited by Addameer.

Both Shin Bet and Addameer gave Arbeed’s age as 44.

Police refused to comment on the nature of Arbeed’s arrest, while the Shin Bet said that during his interrogation he said “he did not feel well.” “In accordance with procedures, he was transferred to medical examination and care at a hospital,” the security agency said in a statement.

Shin Bet refused to provide further details since “the investigation of the terror cell was still ongoing.”

Following Addameer’s statement, Palestinian health minister Mai Al-Kaila appealed to international organisations to “intervene to save the prisoner.” The Palestinian Prisoners Club called the incident “a crime authorised (by the Israeli) judiciary.”

According to media reports, the Israeli Ministry of Justice embarked on an inquiry into the interrogation process of Arbeed by agents of Shin Bet, Israel’s internal security service.

Shin Bet said the man “did not feel well” during interrogation and was taken to a hospital. It gave no further details.

On Saturday, Israeli officials announced that Arbeed and two others had been arrested for involvement in last month’s bombing that killed a teenage Israeli girl and wounded her father and a brother at a spring near Dolev, a settlement northwest of Jerusalem.

Israel said Arbeed and his cell, members of the Popular Front for the Liberation of Palestine, planned other attacks and that an additional bomb had been uncovered. They were caught in a joint operation by Shin Bet, Israeli police and the army.

The bombing that killed 17-year-old Rina Shnerb had perplexed Israeli security agencies since it involved a hidden explosive device, a tactic rarely used by Palestinian militants in the West Bank.

Palestinian President Mahmoud Abbas took to the world stage on Thursday to slam the United States for “depriving the peace process of any credibility” and undermining prospects for a two-state solution to the decades-old Israeli-Palestinian conflict.

In a speech before the UN General Assembly, Abbas also criticised the US for recognising Jerusalem as Israel’s capital, for saying that Israeli settlements in the Palestinian territories are legitimate and for cutting development aid to the Palestinians.

US policy, he said, is “pushing large segments of the Palestinian people to lose hope in the possibility of long-awaited peace,” and renewed his call for an international peace conference.

Hours later, the Israeli foreign minister called on “all countries” to follow the American example and recognise Jerusalem as the capital of Israel.