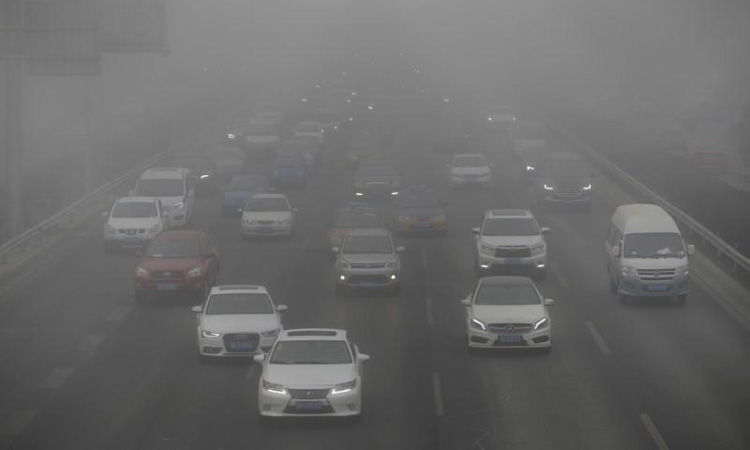 Vehicles drive on the Fourth Ring Road during the smog in Beijing, China. File photo/Reuters

Smog in the Chinese capital Beijing spiked on Monday morning despite region-wide efforts to curb emissions ahead of celebrations to mark 70 years of Communist Party rule on Oct. 1.

The environment ministry warned last week that regions along the eastern coast would face a sustained period of heavy smog lasting until the first week of October, with industrial and transportation emissions slow to disperse as a result of low pressure and high levels of humidity.

Monitoring stations throughout the capital recorded levels of hazardous airborne particles known as PM2.5 at more than 160 micrograms per cubic metre, with readings as high as 180 micrograms near the Temple of Heaven in central Beijing at 11am, according to official environment ministry data.

PM2.5, or particulate matter that is less than 2.5 microns in size, is considered especially hazardous since it can penetrate deep into the lungs.

Chinese President Xi Jinping will oversee a military parade on Tuesday that is set to feature the country’s new and advanced missile and drone technology, as well as about 15,000 personnel and more than 160 aircraft.

China has previously shut down vast swathes of industrial capacity, imposed strict curbs on traffic and even seeded clouds in order to guarantee blue skies during key political events.

This year, however, it has refrained from blanket factory closures and relied instead on routine alerting systems, triggering curbs on transportation and industry throughout the country.