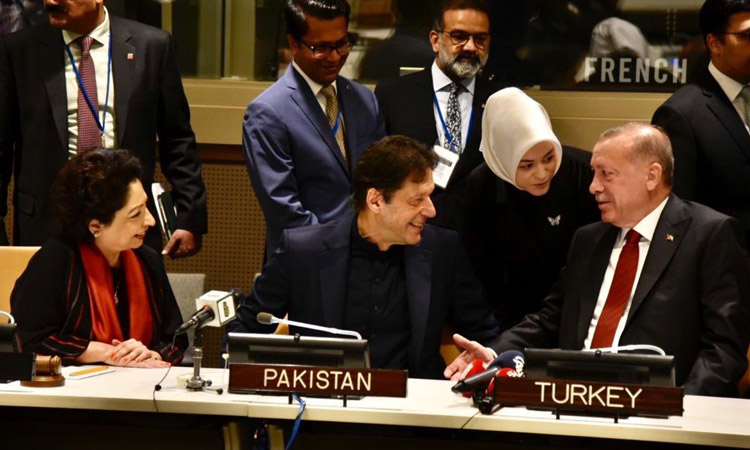 Imran Khan talks to Recep Tayyip Erdogan during a roundtable discussion on ‘Countering Hate Speech’ at the UN headquarters in New York on Wednesday. Twitter photo

Prime Minister Imran Khan has said that Pakistan, Turkey and Malaysia have decided to launch an English language channel to confront multiple challenges, including those of Islamophobia.

Imran, who is currently in New York in connection with the UN General Assembly session, made this announcement on microblogging website. Under the joint venture by the three countries, series and films would be produced so that the Muslims and the world at large could be educated on the Islamic history, he said.

“President Erdogan, Prime Minister Mahatir and myself had a meeting in which we decided our 3 countries would jointly start an English language channel dedicated to confronting the challenges posed by Islamophobia and setting the record straight on our great religion - Islam,” Imran said in the tweet.

In another post, he elaborated: “Misperceptions which bring people together against Muslims would be corrected; issue of blasphemy would be properly contextualised; series & films would be produced on Muslim history to educate/inform our own people & the world; Muslims would be given a dedicated media presence.”

Imran called on for effective measures to counter hate speech and Islamophobia, stressing upon the importance of addressing both the causes and consequences of these phenomena. Noting the growing incidents of discrimination and violence based on religion and belief, the prime minister underscored that the religion had nothing to do with terrorism.

The premier also cautioned against attempts to defame the revered personalities and scriptures, cloaked in the claim for right to freedom of expression and opinion. Imran has emphasised that religion has no link to terrorism and that it is “marginalisation of communities (that) leads to radicalisation.”

Pakistan and Turkey co-hosted a round table discussion on hate speech on the sidelines of the 74th session of the UN General Assembly in New York.

Imran along with Erdogan, addressed the conference, which also featured a key note address by High Representative for the UN Alliance of Civilisations (UNAOC) Miguel Angel Moratinos.

In his remarks, the premier noted the growing amount of “discrimination and violence based on religion and belief,” a statement by the Prime Minister’s Office said.

“Almost all terrorism is connected to politics. It is politically perceived injustices that produce desperate people,” he added.

Erdogan said that hate speech “emerges before worst crimes against humanity” and observed that Muslims remain the most vulnerable community to hate speech in the world.

Also on Wednesday, US President Donald Trump said he encouraged India and Pakistan to work out their differences in separate meetings with their prime ministers this week.

“I said, ‘Fellas, work it out. Just work it out,’” Trump told a news conference after attending the UN General Assembly. “Those are two nuclear countries. They’ve gotta work it out,” he said.

Indian Prime Minister Narendra Modi last month revoked the Muslim-majority region’s autonomy and imposed a clampdown that has snapped off most internet and cellular communications to ordinary people.

Imran has urged the United States to take up Kashmir, but India has long refused outside mediation. Imran on Wednesday met the editorial board of New York Times (NYT) and reiterated his demand that the international community should play a role for the resolution of the Kashmir issue.

During the meeting, Imran apprised the editorial board of “Indian atrocities” in the Kashmir, and said the Indian actions have “put the peace of the region at stake.”

He said there is a “fear of bloodshed in occupied Kashmir and to prevent this situation, the international community must take immediate action.”

The NYT has been writing pieces sympathetic to the Pakistani stand on Kashmir. 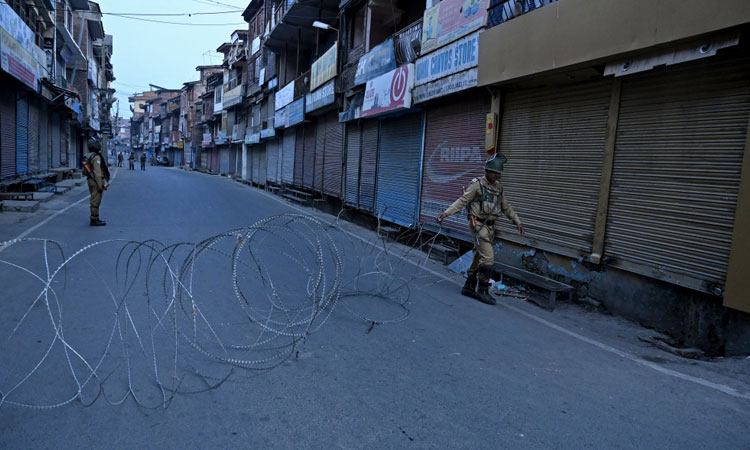 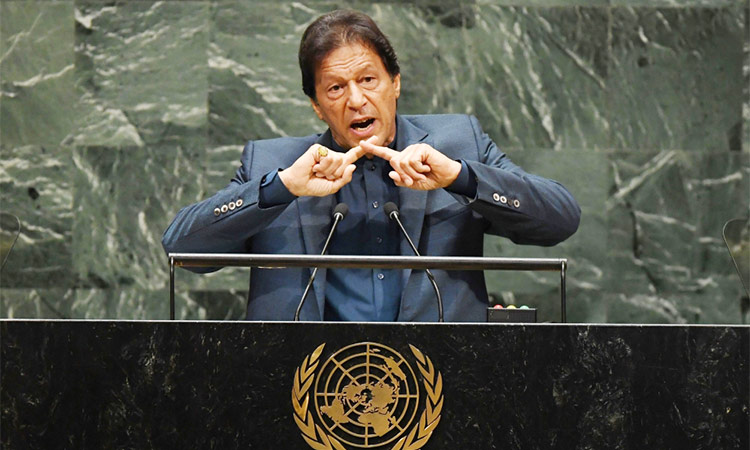