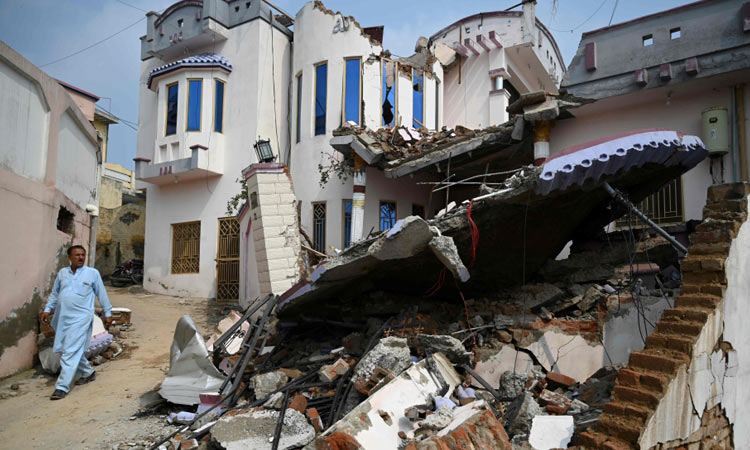 A Kashmiri man walks past a collapsed house in an earthquake-hit area on the outskirts of Mirpur on Wednesday. AFP

Rescuers battled along badly damaged roads and combed through toppled buildings on Wednesday to reach victims of an earthquake that killed at least 38 people and injured hundreds more in northeast Pakistan.

Authorities were still assessing the quake’s impact in villages around the city of Mirpur in Pakistan-controlled Kashmir, but in some the immediate damage was evident. Earlier in the day, mourners buried the dead in Mirpur and nearby villages.

After a night of heavy rain compounded the misery of survivors, hundreds gathered to attend the funerals of residents killed near Mirpur, about 130 kilometres southeast of the capital, Islamabad. 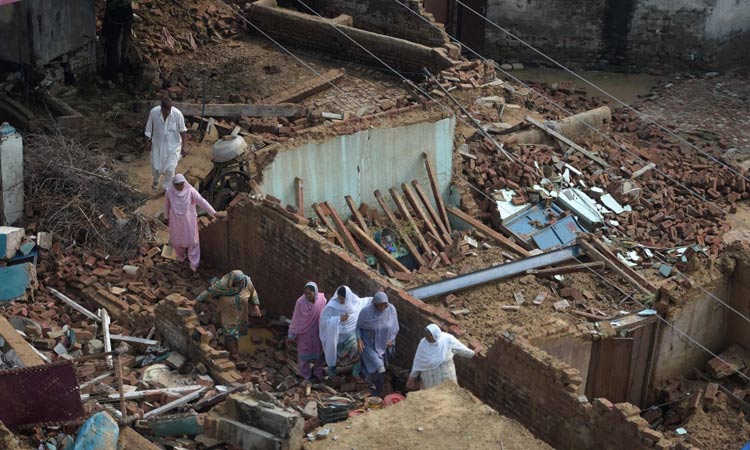 Residents walk amongst collapsed houses in an earthquake-hit area on the outskirts of Mirpur. AFP

“It was like doomsday for us. We lost a number of our near and dear ones,” Muhammad Azam told AFP at a funeral for a neighbour. “Our loved ones will never come back.”

Pakistani geologists faulted the “poor construction of shanty houses in Jatlan” for some of the damage, as well as its location near a fault line and the shallowness of the quake.

“The building code is not followed in most areas,” said Pakistan’s chief meteorologist, Muhammad Riaz.

The 5.2 magnitude quake was not as strong as several that have struck Pakistan over the years, but the epicentre was very shallow — which generally causes more damage.

Near Mirpur, a well-developed city known for its palatial residences, many roads were destroyed, while bridges, mobile phone towers and electricity poles were also badly damaged.

The village of Jatlan on the outskirts of Mirpur appeared to be one of the worst affected.

There, residents sifted through debris and assessed the damage, with large cracks defacing walls in the houses that still stood, and brick fences reduced to rubble. r.

Photos and video carried by local media showed dozens of collapsed buildings and homes, uprooted trees and cracks in roads large enough to swallow cars in Mirpur, a town on Pakistan's side of the disputed territory of Kashmir near India.

According to state-run Pakistan Television, four children were among the dead in Mirpur, a town in the Azad Jammu and Kashmir.

Media photos and video showed a collapsed building and cracks in roads large enough to swallow cars in Mirpur.

Mirpur, a city known for its palatial houses, has strong ties to Britain and the majority of its 450,000 residents carry both British and Pakistani passports.

"I am in the hospital right now and I am being told that several of the injured people are in a critical condition," he told Reuters by phone.

Major General Asif Ghafoor, a spokesman for the Pakistan Armed Forces, tweeted that army troops with aviation and medical support teams were dispatched.

"The quake was 10 kilometres deep and was felt in most of Punjab province, some parts of Khyber Pakhtunkhwa. The worst hit was Mirpur, Azad Kashmir," Pakistan's chief meteorologist Muhammad Riaz told reporters. 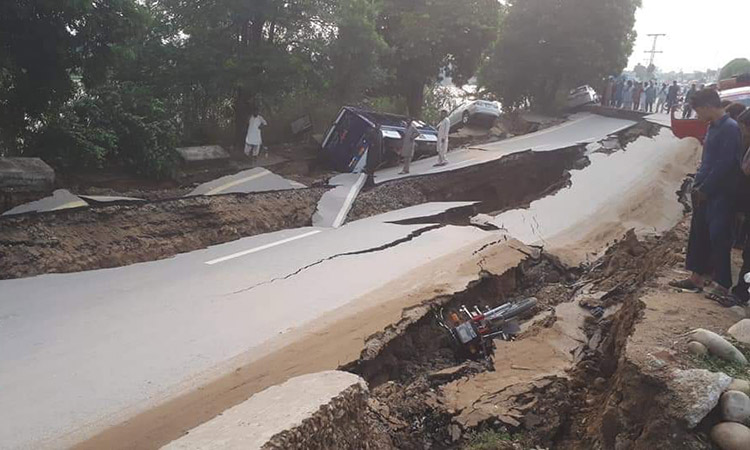 Residents look at a road hit by earthquake.

Pakistan's military deployed "aviation and medical support" teams along with troops to affected areas in Kashmir, according to its spokesman.

The prime minister of Pakistani Kashmir said at least 100 people were injured and being treated in a Mirpur hospital, adding that there were no reports of fatalities and relief efforts were ongoing.

However, others gave conflicting tolls.

"More than 70 people have been wounded and at least three killed in the earthquake," Saeedur Rehman Qureshi, an official from the State Disaster Management Authority, told reporters.

Naeem Chughtai, a Mirpur resident living near the city's main hospital, told AFP that at least one 10-year-old girl had been killed.

He also said the area's infrastructure − including roads, mobile phone towers, and electricity poles − had been badly damaged by the quake. 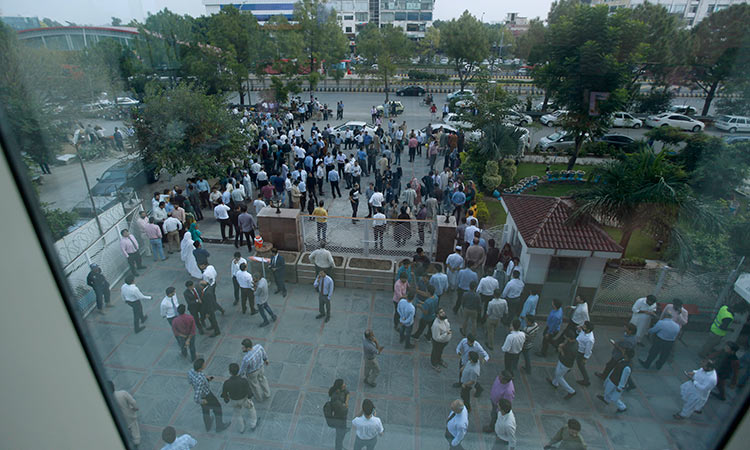 People stand outside their office after an earthquake is felt in Islamabad on Tuesday.  Anjum Naveed / AP

Witnesses Sajjad Jarral and Qazi Tahir, who spoke to media by telephone from Mirpur, said the quake had caused a building to collapse and inflicted heavy damage on at least one road.

Tremors were felt as far as New Delhi, with the Press Trust of India reporting that panicked people rushed out of their homes and offices in several places, including in Rajasthan, Punjab, and Haryana.

"The earthquake was felt but there are no reports of any damage," Amir Ali from the disaster management department in Indian-administered Kashmir told AFP.

Pakistan straddles part of the boundary where the Indian and Eurasian tectonic plates meet, making the country susceptible to earthquakes.

The country was also hit by a 7.6-magnitude quake on October 8, 2005, that killed more than 73,000 people and left about 3.5 million homeless, mainly in Pakistan-controlled Kashmir.