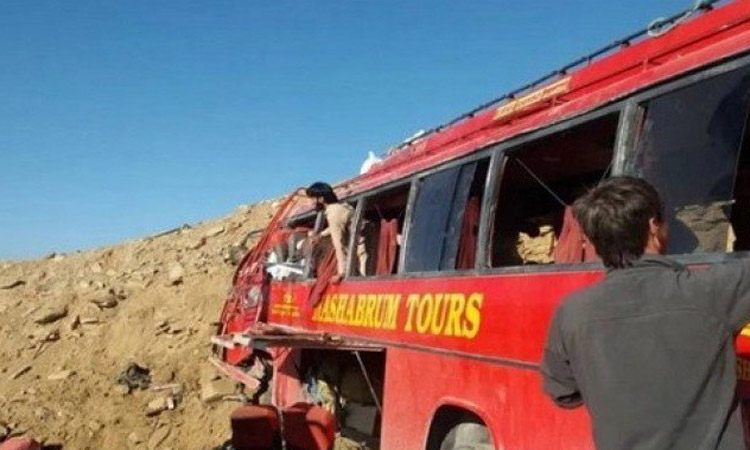 Ten Pakistan army soldiers were among 26 people killed in a passenger bus accident on Shahrah-e-Kaghan near Chilas on Sunday.
At least 13 more people were injured in the crash. The bus was heading to Rawalpindi from Skardu with around 40 passengers, 16 of whom were Pakistan army personnel.

Officials said the bus — which was operated by a private transport company — crashed into a mountainside on Shahrah-e-Kaghan at a location between Geeti-Das and Babusar Top.

Rasheed Arshad, a spokesman for the Gilgit-Baltistan chief minister, confirmed that 26 bodies, among them women and children, have been retrieved from the wreckage.

He said 13 passengers were admitted to the DHQ Hospital, Chilas, and some of them were in critical condition.

The official confirmed there were 16 Pakistan army personnel on the bus and said most passengers were from Skardu or other parts of Gilgit-Baltistan.

Later in the day, the Inter-Services Public Relations also confirmed the death of 10 army soldiers in the accident.
Shahrah-e-Kaghan up to Babusar Top was reopened for traffic in mid-June after eight months. It had been closed for traffic after heavy winter snowfall. The route presents the quickest road means to travel to Gilgit-Baltistan from Islamabad.

Abdul Wakil, a local police officer, said rescue efforts were facing difficulties in the remote mountainous terrain due to lack of needed equipment and resources.

Local administration official Aurangzeb Haider said four women and six children were among the dead, while senior police official Zaibullah Khan said six of the injured were in critical condition.