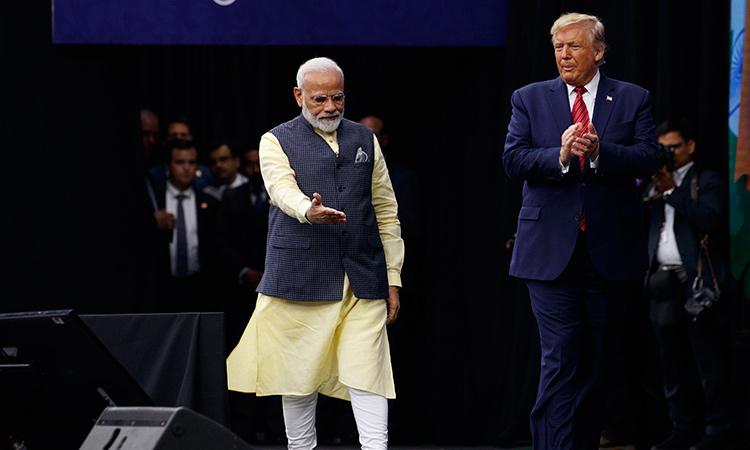 "Abki bar, Trump sarkar" (This time Trump's government). Prime Minister Narendra Modi on Sunday made a tacit backing for US President Donald Trump who is seeking re-election, and said his presence on the stage with him signaled the close partnership between the two nations.

"This morning we have a very special person with us, he needs no introduction. His name is familiar to every person on the planet. His name comes up in almost every conversation on global politics, his every word is followed by tens of millions," said Modi, with President Trump listening and smiling.

"He was a household name and very popular even before he went to occupy the highest office in this great country "From CEO, to commander-in-chief, from board rooms to the Oval Office, from studios to the global stage, from politics to the economy and security, he has left a deep and lasting impact everywhere. Today he is here with us, and it is my honour and privilege to welcome him here in this magnificent stadium and magnificent gathering.

"And I can say I had a chance to meet him often and everytime I found the friendliness, warmth and energy of the President of the USA, Donald Trump. This is extraordinary, this is unprecedented... Friends, as I told you we have met a few times and every time he has been the same warm, friendly accessible, energetic and full of wit.

"I admire him, for something more, his sense of leadership, a passion for America, a concern for every American, a belief in the American future, and a strong resolve to make America great again.

"And he has already made the American economy strong again. He has achieved much for the US and for the world. Friends, we in India have connected well with America.

He said the US President's presence on the stage was a testimony to the strong friendship between their two countries.

"This morning in Houston, you can hear the heartbeat of this great partnership in the celebration of the two largest democracies. You can feel the strength and depth of the human bonds, between our two great nations.

"People are at the heart of the relations, from Houston to Hyderabad, from Boston to Bengaluru, from Chicago to Shimla, from Los Angele to Ludhiana, from New Jersey to New Delhi, hundreds of millions are glued to their TV, even though it is rather late on a Sunday night in India.

"Millions around the world in different time zones are with us today, they are witnessing history in the making.

"Mr President, you had introduced me to your family in 2017, and today I have the honour to introduce you to my family," Modi said to loud cheers.

"Over a billion Indians and people of Indian heritage around the globe, ladies and gentlemen I present to you my friend, a friend of India, a great American President Mr Donald Trump."