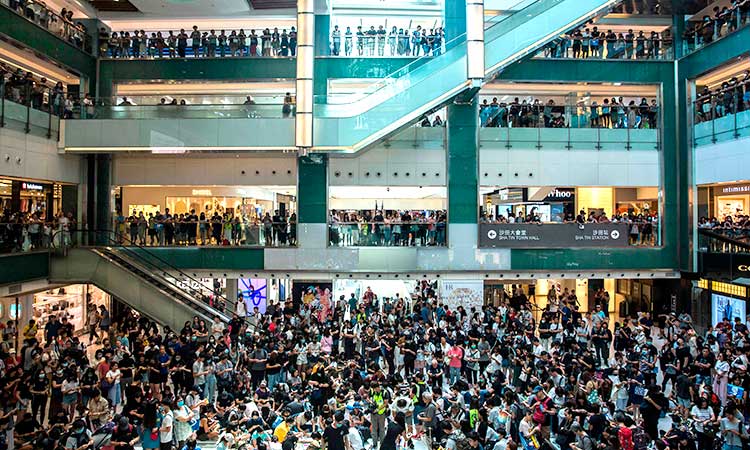 People gather at an anti-government rally inside a shopping mall at the Sha Tin district of Hong Kong. Isaac Lawrence/AFP

Meanwhile, Hong Kong riot police took up position at the main rail station serving the airport on Sunday to prevent a new anti-government protest targeting air travel after a night of violent street clashes in the Chinese-ruled territory. 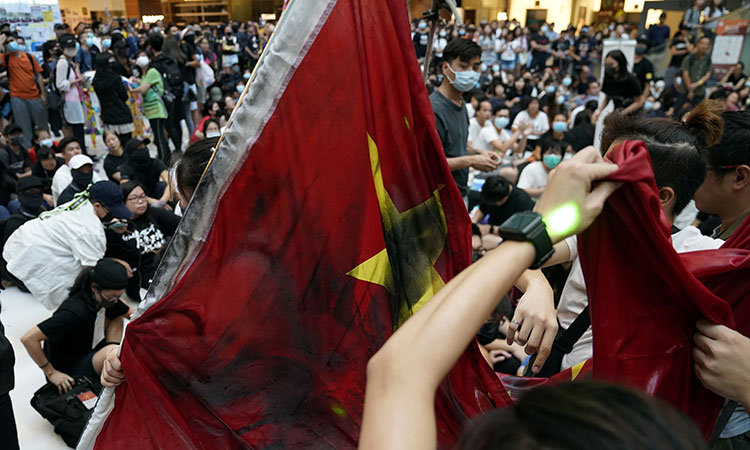 Anti-government protesters destroy a Chinese flag during a rally in a shopping mall in Sha Tin, Hong Kong. Reuters

Pro-democracy protesters have targeted the airport before, occupying the arrivals hall, blocking approach roads and setting street fires in the nearby town of Tung Chung, and trashing its subway station.

The Airport Express, which takes passengers under the harbour and across a series of bridges to the airport, built on reclaimed land around an outlying island, was only allowing passengers to board in downtown Hong Kong, not on the Kowloon peninsula, the Airport Authority said.

And only people holding flight tickets were allowed to enter the terminal. Bus services were also affected.

One traveller, a 73-year-old retiree from Canada, said he had no problem with the protests if they were "legal and peaceful”.

"They are just trying to voice their demands. As a civilised resident I think these demands are legitimate," the man, who asked to be identified only as Chow, told Reuters.

Australian traveller Jody Paul, 55, who spent a week on holiday in the former British colony, said the protests hadn’t affected her trip.

"It was lovely — we didn’t see any of the protesters or any of the action. I was hoping for a glimpse.” 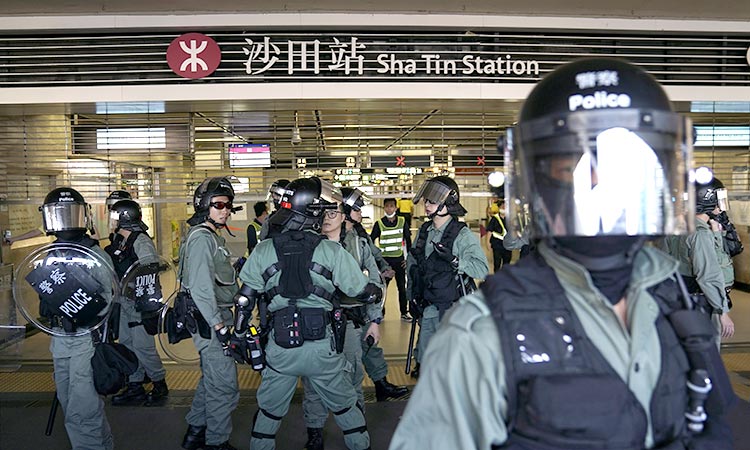 Hundreds of protesters, young and old, gathered in a shopping mall in the New Territories town of Sha Tin, chanting: "Hong Kong people, add oil", loosely translated as "keep your strength up".

Families were making origami paper birds with slogans and pinning them on frames. One girl was sitting on the floor doing her arithmetic homework. 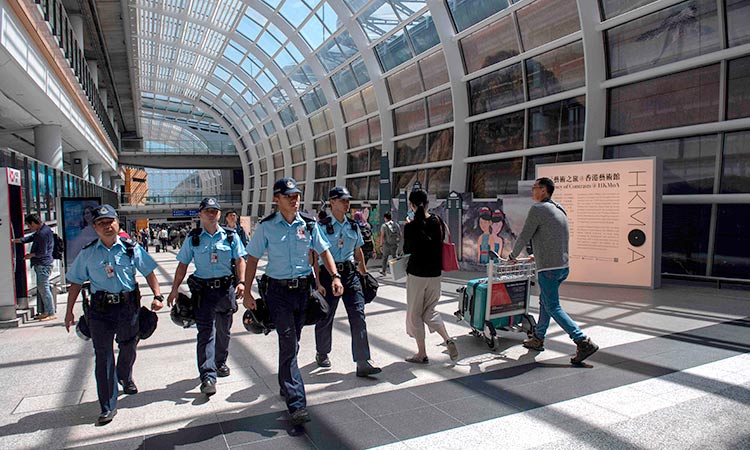 Police officers patrol inside terminal 1 at the international airport in Hong Kong on Sunday. Nicolas Asfouri/AFP

One common slogan written on the birds and common throughout the protests is "five demands, not one less". The protests picked up in June over legislation, now withdrawn, that would have allowed suspects to be sent to mainland China for trial.

The four other demands are retraction of the word "riot" to describe rallies, release of all detained demonstrators, an independent inquiry into perceived police brutality and the right for Hong Kong people to choose their own leaders.

The violence has hit pockets of Hong Kong at different times over more than three months, allowing life to go on as normal for most of the time.

But pictures of petrol bombs and street clashes broadcast worldwide present a huge embarrassment for Beijing just days ahead of the 70th anniversary of the founding of the People's Republic on Oct. 1. 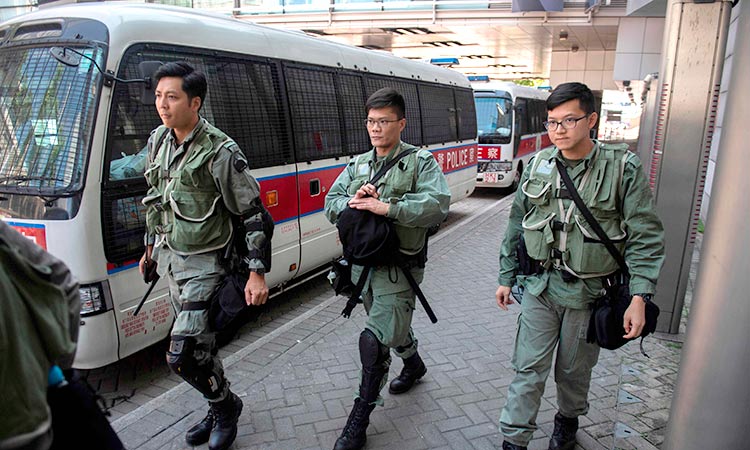 The Hong Kong government has already called off a big fireworks display to mark the day in case of further clashes. China, which has a People's Liberation Army garrison in Hong Kong, has said it has faith in Hong Kong leader Carrie Lam to solve the crisis.

Police fired tear gas to disperse protesters who threw petrol bombs in two new towns on Saturday after pro-China groups pulled down some of the "Lennon Walls" of anti-government messages. There were violent clashes elsewhere in the city.

Police condemned the violence and said there had been many serious injuries in fights between people of "different views". 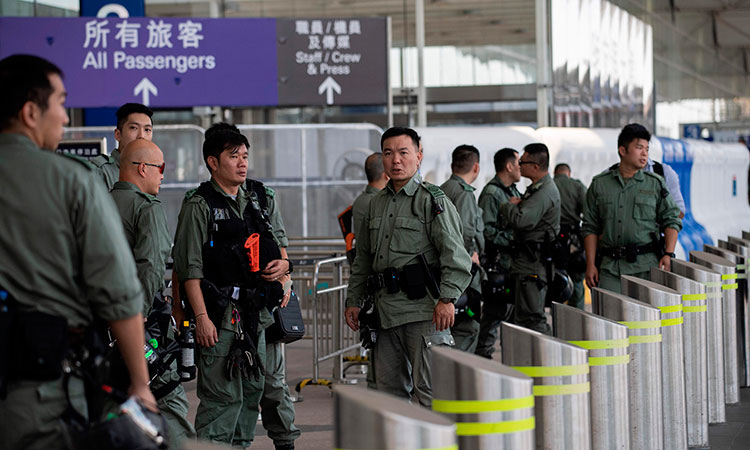 Riot police officers patrol outside terminal 1 at the international airport in Hong Kong on Sunday. AFP

"They threw petrol bombs at police vehicles and police officers, and even attempted to snatch the revolver of a police officer," police said in a statement on Sunday.

The protesters are angry about what they see as creeping Chinese interference in Hong Kong, which returned to China in 1997 under a "one country, two systems" formula intended to guarantee freedoms that are not enjoyed on the mainland.

China says it is committed to the "one country, two systems" arrangement and denies meddling. It has accused foreign governments including the United States and Britain of inciting the unrest.

Secretary for Justice Teresa Cheng wrote on her blog that the rule of law would be upheld.

"Our courts administer justice in full accordance with the law and admissible evidence ... Some may not like the outcome but it does not mean that the independence of the judiciary is in any way compromised," she wrote.