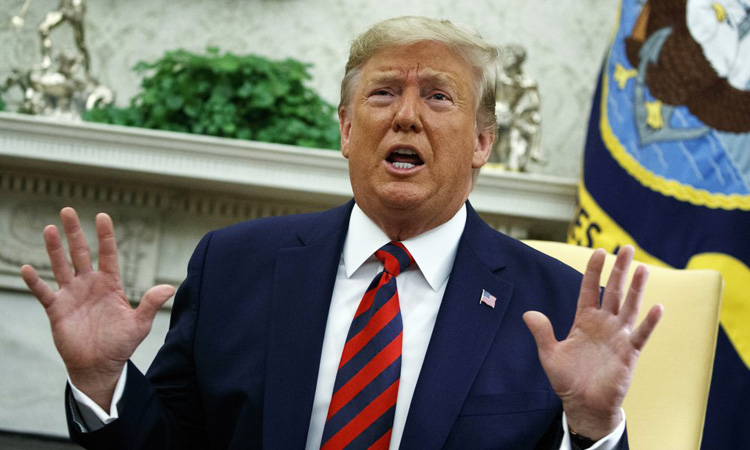 Donald Trump speaks during a meeting with Australian Prime Minister Scott Morrison in the Oval Office of the White House on Friday. Evan Vucci/ AP

President Donald Trump urged the new leader of Ukraine this summer to investigate the son of former Vice President Joe Biden, a person familiar with the matter said. Democrats condemned what they saw as a clear effort to damage a political rival, now at the heart of an explosive whistleblower complaint against Trump.

It was the latest revelation in an escalating controversy that has created a showdown between congressional Democrats and the Trump administration, which has refused to turn over the formal complaint by a national security official or even describe its contents.

Trump defended himself on Friday against the intelligence official’s complaint, angrily declaring it came from a “partisan whistleblower,” though he also said he didn’t know who had made it. The complaint was based on a series of events, one of which was a July 25 call between Trump and Ukrainian President Volodymyr Zelenskiy, according to a two people familiar with the matter. The people were not authorized to discuss the issue by name and were granted anonymity.

Trump, in that call, urged Zelenskiy to probe the activities of potential Democratic rival Biden’s son Hunter, who worked for a Ukrainian gas company, according to one of the people, who was briefed on the call. Trump did not raise the issue of US aid to Ukraine, indicating there was not an explicit quid pro quo, according to the person.

Biden reacted strongly late on Friday, saying that if the reports are true, “then there is truly no bottom to President Trump’s willingness to abuse his power and abase our country.” He said Trump should release the transcript of his July phone conversation with Zelenskiy “so that the American people can judge for themselves.”

The government’s intelligence inspector general has described the whistleblower’s Aug.12 complaint as “serious” and “urgent.” But Trump dismissed it all on Friday, insisting “it’s nothing.” He scolded reporters for asking about it and said it was “just another political hack job.”

Trump, who took questions in the Oval Office alongside Australian Prime Minister Scott Morrison, whom he was hosting for a state visit, was asked if he knew if the whistleblower’s complaint centered on his July 25 phone call with Ukrainian President Zelenskiy. The president responded, “I really don’t know,” but he continued to insist any phone call he made with a head of state was “perfectly fine and respectful.”

Trump was asked on Friday if he brought up Biden in the call with Zelenskiy, and he answered, “It doesn’t matter what I discussed.” But then he used the moment to urge the media “to look into” Biden’s background with Ukraine.

There has yet to be any evidence of any wrongdoing by Biden or his son regarding Ukraine.

Trump and Zelenskiy are to meet on the sidelines of the United Nations next week. The Wall Street Journal first reported that Trump pressed Zelenskiy about Biden.