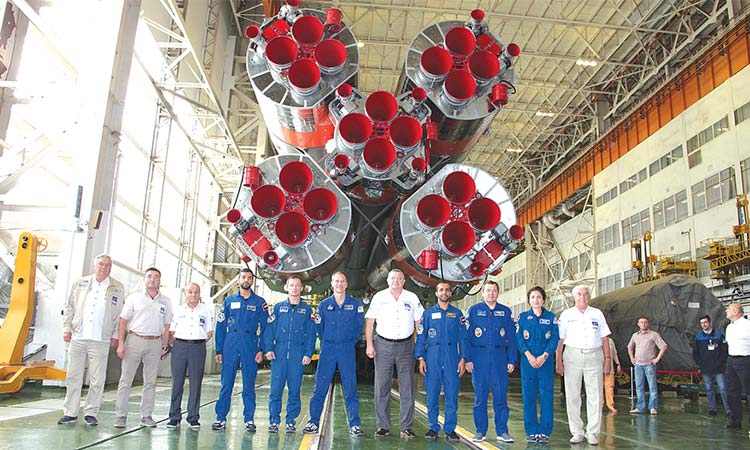 On Sept.20, the Soyuz MS-15 spacecraft prime and backup crews performed the second “fitting” – check inspection of the crewed spacecraft in the launch set at the pad No. 254 of the Baikonur Cosmodrome.

After the introductory briefing, the crews entered the Soyuz vehicle in turn, reconfirmed the equipment sets to be delivered to the International Space Station, and checked the workability of various systems including the communication system in the test mode.

Later the crews went on to visit the RSC Progress subsidiary assembly facility to inspect the Soyuz-FG carrier rocket and visited the Baikonur Cosmodrome museum. The cosmonauts and astronauts left their signatures on the autograph stand and wrote commemorative inscriptions and wishes in the guest book.

Hazza will return to Earth in the Russian Soyuz MS-12 spacecraft on Oct.3 with Nasa astronaut Nick Hague and Roscomos cosmonaut Alexei Ovchinin. The trio’s departure will mark the start of Expedition 61 as Luca takes on the role of International Space Station commander.

Earlier, the National Geographic, in partnership with Mohammed Bin Rashid Space Centre (MBRSC), declared on Wednesday the release of the first long film documenting the UAE’s extraordinary journey into space. The brand-new documentary, which is the first of a 4-part film series, was scheduled to premiere on Sept.19 ahead of the historic International Space Station (ISS) Mission take-off.

It is accompanied by short vignettes with exclusive coverage on the astronauts’ final preparations for their upcoming Mission. With the imminent space mission launch, the vignettes spotlight Al Mansouri and Al Neyadi’s intensive training with prime and backup flight crews in Russia, after completing training with the European Space Agency (ESA) and NASA.

It highlights the life of both astronauts and their dreams and aspirations. It also follows the stages of their journey to the ISS and their daily life on it.

Recently, the UAE’s first astronaut, Hazzaa Al Mansoori, documented his training at the Baikonur Cosmodrome in Kazakhstan, through a 60-second video, which he posted as a story on his personal Instagram account. In the video, he appeared to be training on the brutal rotating chair, in order to stimulate the balance system in the inner ear, according to his comment. The experiment helps reduce the side effects on the human body incurred by lack of gravity in space, according to Yamama Bedwan, Staff Reporter.

In another comment, he added that he successfully completed the 10-minute rotating chair training on his sixth day at the Baikonur Cosmodrome, where he is preparing for a space flight to the International Space Station after 8 days, as part of the S61 Expedition crew that is composed of the first Emirati astronaut Hazza Al Mansoori, American astronaut Jessica Meir and Russian commander Oleg Skripochka.

The Mohammed Bin Rashid Space Center also posted on its Instagram page a video in which Hazza Al Mansoori appeared to answer the question “How do astronauts reach the International Space Station (ISS)?”, replying: “Currently, the only way for astronauts to reach the ISS is the Russian Soyuz spacecraft. There was another way: the US space shuttle, which stopped in 2011.”

As part of the pre-launch arrangements for the International Space Station (ISS) , and according to the traditions followed before astronauts are aboard the Russian Soyuz spacecraft to the ISS, the UAE astronaut Haza’a Al Mansouri planted a tree in the corridors of the Astronauts Park at the Baikonur Space Centre.