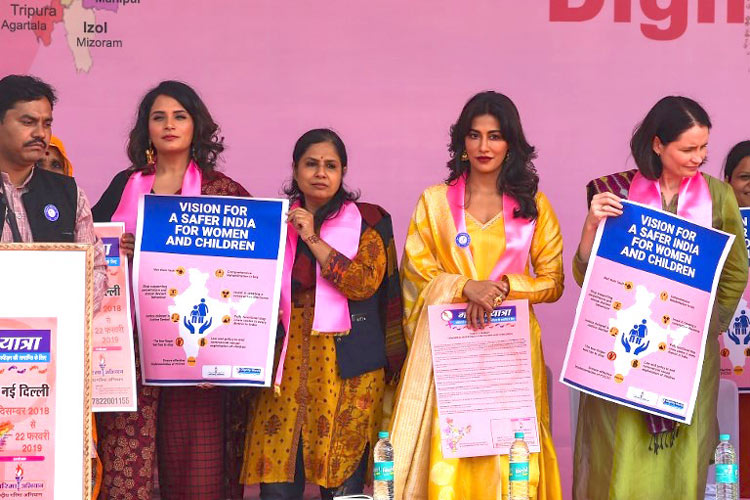 The photo has been used for illustrative purposes only. File

A former government minister and senior member of India's ruling Bharatiya Janata Party (BJP) was arrested on Friday in connection with rape and sexual harassment allegations made by a law student, police and his lawyer said.

Swami Chinmayanand, who previously served as India's minister of state for internal affairs, has been charged under a section of the Indian penal code that covers sex crimes by a person in authority, his lawyer, Pooja Singh, said.

"We have enough evidence and confession from the accused to frame charges," Naveen Arora, one of the police officers investigating the case told a news conference.

The director general of police in Uttar Pradesh state, OP Singh, also confirmed Chinmayanand's arrest to media, but declined to comment on the nature of the charges.

Pooja Singh said he had been prevented by police from seeing Chinmayanand. Om Singh, a second lawyer for Chinmayanand, said he had also been unable to meet his client and declined to comment when asked for a response to the charges.

"Cannot say anything as of now. We are moving an application in the court to shift him to the hospital from jail due to his deteriorating health conditions," Om Singh told Reuters.

Arora declined to comment when asked whether Chinmayanand had been prevented from seeing his lawyers.

Chinmayanand runs several educational and welfare institutions in the northern state of Uttar Pradesh and the victim was a student at one of his colleges, according to media reports.

The woman, who has accused the politician of rape, on Thursday threatened to set herself on fire if police did not take action against Chinmayanand.

She filed a case in early September and authorities had faced criticism over the pace of the investigation.

"We arrested him this morning and the court has since sent him to judicial custody for 14 days," Naveen Arora, state police inspector general, told journalists.

Arora said the accused had been confronted with phone records and recordings, and had admitted to some of the accusations against him.

Chinmayanand, who served as a junior minister in a coalition government from 1999 to 2004, has so far only been charged with stalking, wrongful confinement and intimidation, Press Trust of India news agency said.

Meanwhile, the Special Investigation Team (SIT) that arrested senior BJP leader Chinmayanand earlier in the day on charges of rape and blackmail of a law student has now arrested two cousins and a male friend of the alleged rape victim.

The three -- Sanjay Singh, Vikram alias Brajesh and Sachin Sengar alias Sonu -- have been arrested under the IT Act and for destroying evidence and extortion, said Uttar Pradesh Director General of Police (DGP) O.P. Singh.

The SIT had already interrogated Sanjay, a male companion of the alleged rape victim, a law student, in this regard.

"Sanjay Singh, the boy with whom the victim first came to Delhi from Shahjahanpur and then went to Rajasthan, initially struck the deal of Rs 5 crore with Chinmayanand. The second accused, Vikram alias Brajesh, helped them in making pen drives of the videos and upload them on social media and even distributed them to mediapersons," said Singh.

Chinmayanand had alleged that he was being asked to pay Rs 5 crore by some boys and the matter was linked to the allegations made by the law student.

A video showing the boys and the alleged victim talking about demanding money from the accused had gone viral on social media.

The case is the second high profile arrest in as many years of a member of the Hindu nationalist ruling party for alleged sex crimes. The previous case sparked widespread outrage and protests across the country.

The alleged victim, who cannot be named for legal reasons, accused Chinmayanand, 72, of raping and physically exploiting her, in a Facebook video released on Aug.22.