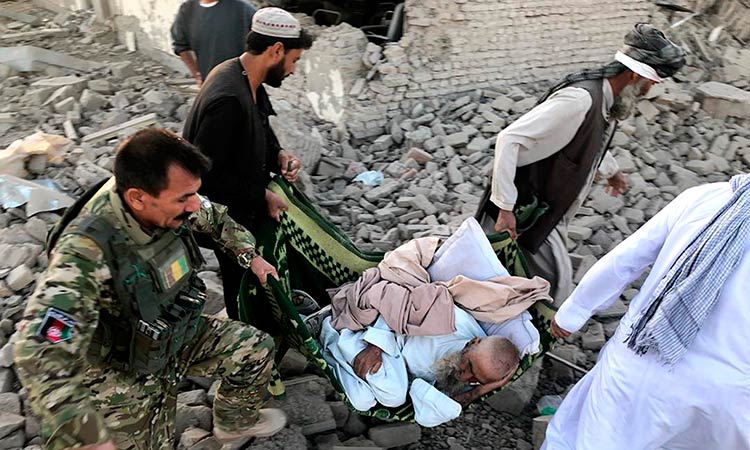 An Afghan security member and people carry an injured man after a suicide attack in Zabul on Thursday. AP

At least 50 civilians were killed and 130 injured in two different incidents in eastern and southern Afghanistan on Thursday.

Afghan officials say at least 30 civilians were killed and 40 injured in an air strike conducted by the Afghan security forces, backed by US air support, in eastern Afghanistan.

The attack, on Wednesday night was aimed at destroying a hideout used by Daesh militants, but it accidentally targeted farmers near a field, three government officials told lthe medoa.

Sohrab Qaderi, a provincial council member in eastern Nangarhar province said a drone strike killed 30 workers in a pine nut field and at least 40 others were injured. 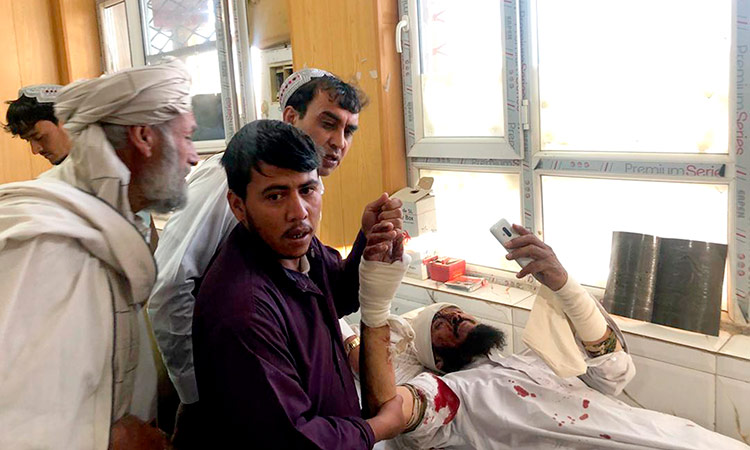 An injured man receives treatment at a hospital after a suicide attack in Zabul, Afghanistan, on Thursday. AP

The defence ministry in Kabul confirmed the strike, but refused to share casualty details immediately.

US forces were not immediately available for a comment.

Meanwhile, a powerful early morning suicide truck bomb devastated a hospital in southern Afghanistan on Thursday, killing as many as 20 people and wounding more than 90 others, an official said. 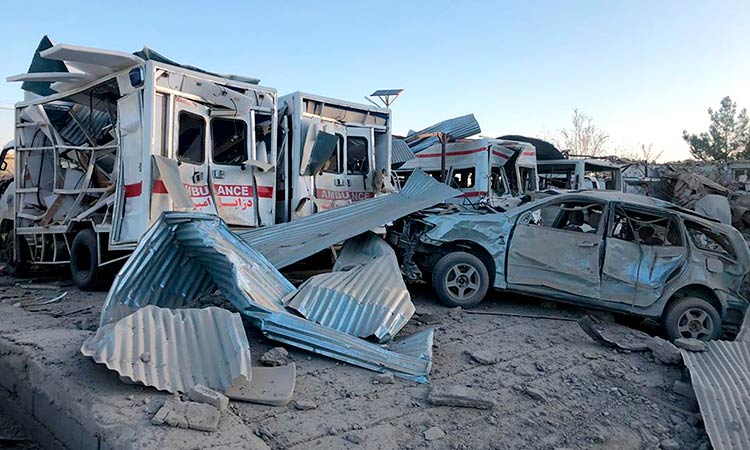 The Taliban, who claimed responsibility for the boming, have carried out nearly daily attacks since peace talks with the United States collapsed earlier this month.

Residents, many of whom had come to see their sick family members, used shawls and blankets to carry the wounded inside the destroyed building, while authorities scrambled to take the worst of the wounded to hospitals in nearby Kandahar.

Morning prayers had just finished when worshippers were stunned by the ear-splitting blast that destroyed parts of a mosque adjacent to the hospital and the hospital building, said Mahboob Hakimi, a resident of Qalat.

Windows in his home nearly two kilometers (over one mile) away were shattered by the blast, he said. 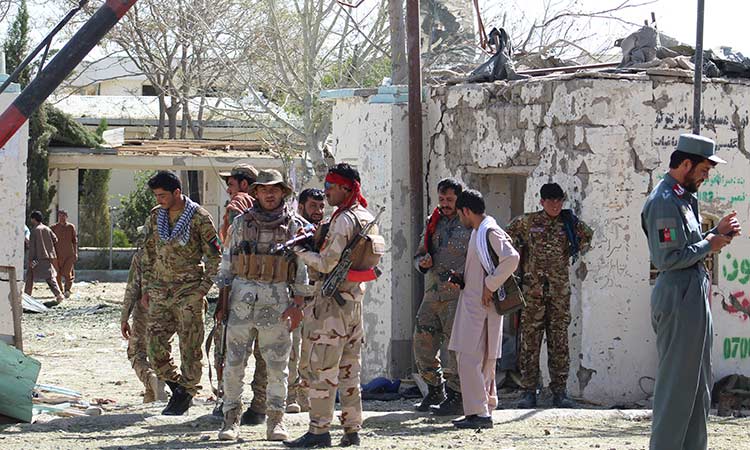 Afghan security forces stand at the site of a car bomb attack in Qalat, Afghanistan. Reuters

A Taliban spokesman, Zabihullah Mujahed, said in a tweet said the target was a nearby intelligence office, which he claimed was destroyed and "tens of intelligence operatives killed/wounded."

Haqbayan said the wall of the National Security Department (NDS) building was damaged. He couldn't say whether any personnel were among the casualties.

The provincial governor, Rahmatullah Yarmal, said many of the dead and wounded were women and children. On Twitter, an Afghan National Security Forces personnel posted a picture of a six-month-old child saying they were searching through the rubble for the parents and sought the public's help.

President Ashraf Ghani's spokesman, Sediq Sediqqi, condemned the attack in Zabul, tweeting that the Taliban "continue to target civilians while their leaders travel to Iran and Russia," a reference to the Taliban negotiators recent forays seeking support abroad.

The violence has further rattled the country as it prepares for national elections later this month. Two separate bombings on Tuesday, including one that targeted Afghan President Ashraf Ghani's election rally, killed 48 people, mostly civilians. The Taliban took responsibility for both attacks.

Suhail Shaheen, the Taliban's spokesman for their political office in the Middle Eastern state of Qatar, said in a tweet that a cease fire had been part of a U.S.-Taliban deal before President Trump declared it "dead." He did not elaborate and earlier defended Taliban attacks prior to an agreement signing, saying both sides in the conflict had carried out attacks.