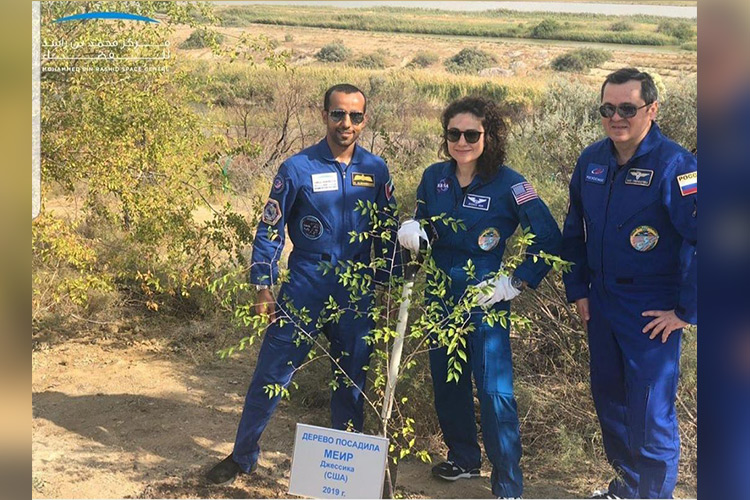 Hazzaa Al Mansouri and other crew member plant a sapling at the Cosmonaut Alley in Baikonur,Kazakhstan.

A video shared by MBRSC showed Hazzaa Al Mansouri and Sultan Al Neyadi planting an Elm sapling at the Cosmonaut Alley in Baikonur.

The brand-new documentary, which is the first of a 4-part film series, premieres on September 19 ahead of the historic International Space Station (ISS) Mission take-off, with Hazzaa Al Mansouri as the first Emirati and only Arab aboard with the Emirati astronaut Sultan Al Neyadi who will be present at the launch, acting as reserve astronaut for the entire Mission. 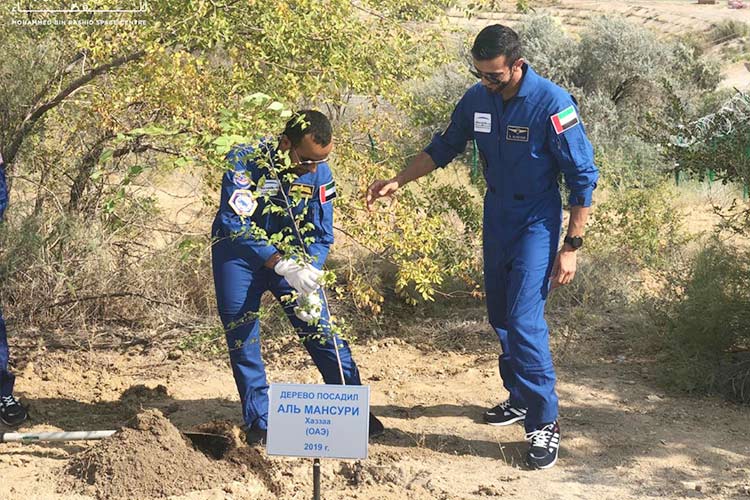 It is accompanied by short vignettes with exclusive coverage on the astronauts’ final preparations for their upcoming Mission. With the imminent space mission launch, the vignettes spotlight Al Mansouri and Al Neyadi’s intensive training with prime and backup flight crews in Russia, after completing training with the European Space Agency (ESA) and NASA.

It highlights the life of both astronauts and their dreams and aspirations. It also follows the stages of their journey to the ISS and their daily life on it.

A father of four, graduate of Khalifa Bin Zayed Air College, Al Mansouri joined MBRSC as an astronaut following a career as military pilot. He hopes to inspire the nation by hoisting the UAE flag inside the ISS on September 25. 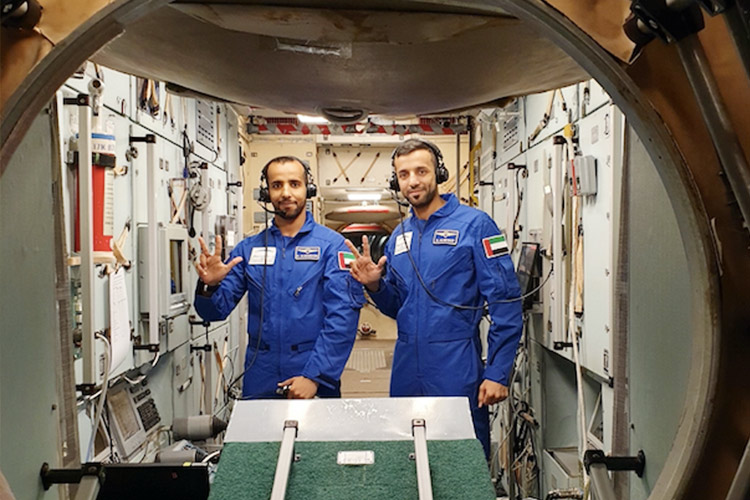 Hazzaa Al Mansouri and Sultan Al Neyadi pose for a photograph at the training centre.

"It will be a great honor to be the first Emirati astronaut to reach the ISS.", he said.

Al Mansouri’s dreams of space exploration started when he was still young.

"I remember when I was in grade four, I read in my school book about an Arab astronaut, Prince Sultan Bin Salman Al Saud, and I thought that is it. I believed it is possible for me too. That is the reason why I applied to join the air force, it felt a little bit closer to the stars.", He says.

Al Mansouri became a military pilot and one of the most prominent flying the F-16. He is scheduled to stay 8 days on the ISS.

Sultan Al Neyadi, who holds a PhD in Information Technology Data Leakage Prevention from Griffith University, expresses his space ambitions saying, "I believe our amazing journey is just a continuation of what our ancestors started. They who studied the stars for centuries and gave them many Arabic names. When we explore space and raise the UAE flag on board the ISS, we are the nation’s ambassadors. We hope to accomplish this mission perfectly." 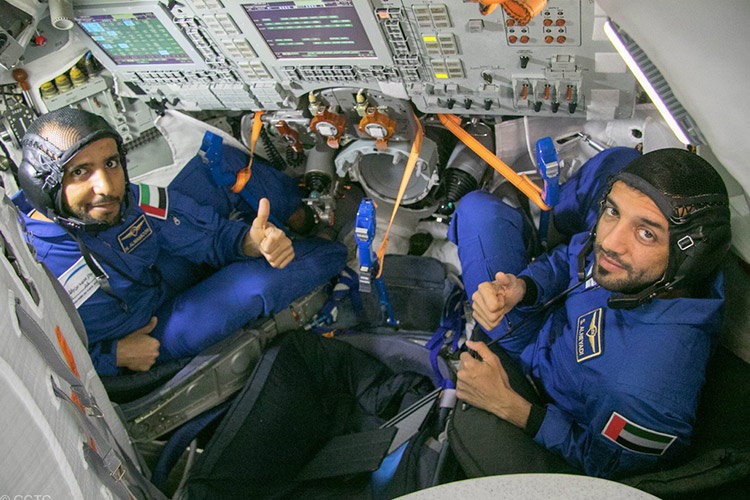 Hazzaa Al Mansouri and Sultan Al Neyadi get updates on the technical front.

In National Geographic’s unique documentary style, the film captures both science and emotion, with multiple story threads and fascinating back stories. It charts the establishment of the UAE’s space industry over a decade ago and describes upcoming journeys extending over the next 20 years. It also briefs viewers on one of the UAE’s most daring projects to date, the 2020 Hope probe, part of the Emirates Mars Mission, scheduled to reach the Red planet by 2021, commemorating 50 years since the UAE’s inception.

The film showcases the mission of the Hope Probe, dubbed Mars "First True Weather Satellite" to reach and orbit Mars to study its atmospheric layers, sending back valuable information to Earth to benefit advanced scientific study. MBRSC is responsible for the execution and supervision of all stages of the design, development and launch of the Hope Probe in 2020. The UAE Space Agency (UAESA) is funding and supervising procedures and necessary details for the implementation of this project. Following a journey of several months, the probe is expected to enter the Red Planet’s orbit in 2021, coinciding with the Golden Jubilee of the Union. 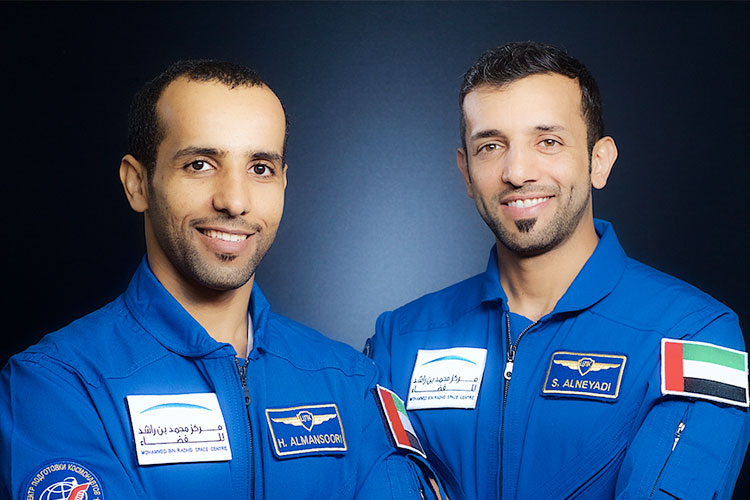 With unprecedented behind-the-scenes access, the film follows the journey of the first Emirati Astronaut Corps, part of the UAE Astronaut Programme and their preparations for launching into space. With exclusive footage, it also captures the development and historic launch of KhalifaSat, the first satellite manufactured entirely by Emirati engineers and successfully launched in 2018. It revives memorable moments, such as the satellite’s final countdown ahead of its launch in Tanegashima, with the nation and KhalifaSat team holding their breath as they awaited the satellite’s first signal from space.

As part of the pre-launch arrangements for the International Space Station (ISS) next Wednesday, September 25, and according to the traditions followed before astronauts are aboard the Russian Soyuz spacecraft to the ISS, the UAE astronaut Hazzaa Al Mansouri planted a tree in the corridors of the Astronauts Park at the Baikonur Space Centre.

The tradition dates back to 1961, when Yuri Gagarin, the first man to go into space, planted a tree just before his flight, and since then astronauts followed the tradition.

It is noteworthy that the mission of the first Emirati astronaut to the ISS falls under the programme "Emirates Astronauts", supervised by Mohammed Bin Rashid Space Centre, and is the first integrated programme in the Arab region to prepare national cadres participating in manned space missions for scientific missions.