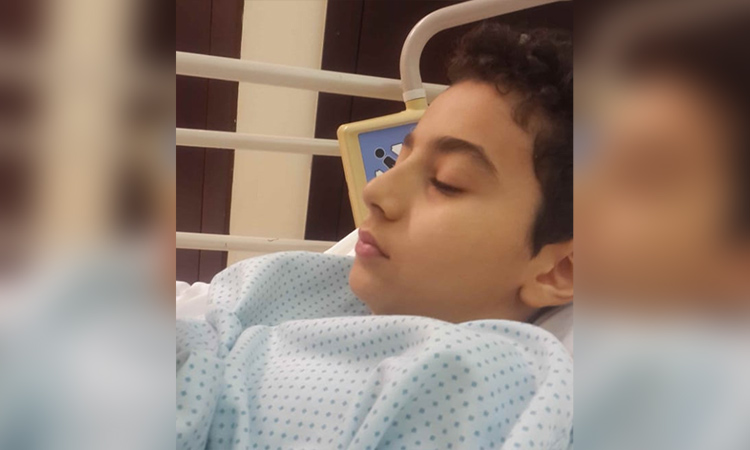 The 8-year-old Palestinian boy receives treatment at a hospital.

A Palestinian student, identified as Abdullah M.K, 8, escaped death in a traffic accident that took place recently on a Ras Al Khaimah road.

The student was crossing the road on his way back from school and was accompanied by his mother, a teacher in the same school in which her son is enrolled.

The family of the grade 3 student confirmed that the mother was not injured in the traffic accident that took place on Al Muntasser Road although she was walking beside her son just a few centimetres away.

The injured student was admitted to Saqr Hospital in Ras Al Khaimah where the medical examinations showed that he had a fracture in the right leg and a wound in his head. The student is still in the hospital.

The mother of the student, who is the only son of the family, said she crosses the road between the school and home every day and is accompanied by her son and daughter. On the day of the accident, she was crossing the road opposite to the family house when a car stopped at the far left side of the road to let her cross the road. Her daughter had already crossed the road before the three were surprised by a speeding large vehicle coming from the right side and heading towards the mother.

The driver tried to evade the mother but hit her son just a few seconds before entering his house.

Recently, an Asian boy sustained serious injuries after being hit by a vehicle while crossing a main road in Al Nahda in Sharjah on Saturday.

The operations room of the Sharjah Police General Headquarters received a report at 9pm on Saturday that an Asian boy, 16, was hit by a vehicle in Al Nahda. The national ambulance rushed to the scene of the accident and found that the driver of the vehicle that hit the boy had run away and had not waited for the traffic patrols and national ambulance.

The injured boy was taken to the emergency section of Al Qasimi Hospital where he underwent a surgical operation as a result of sustaining serious injuries including fractures in the shoulder bones.