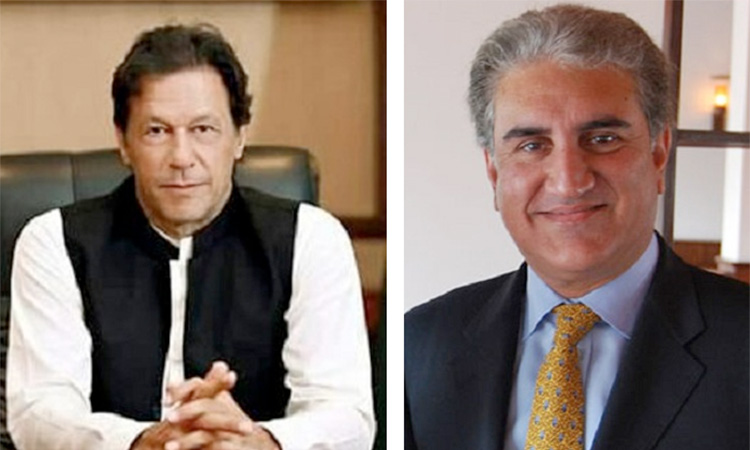 Prime Minister Imran Khan, accompanied by Foreign Minister Shah Mehmood Qureshi, will visit Saudi Arabia on Thursday. Addressing the All Parties Kashmir Conference in Lahore, Qureshi said: “We have important sittings over there. Keeping those sittings at the forefront, we will have to deliberate on further measures.”

“I think it is enough to say just this right now,” he added, according to the report.

Earlier in the day, Imran spoke to Saudi Crown Prince Mohammed Bin Salman over the telephone and discussed bilateral and regional matters, specifically focusing on the attacks on the oil facilities in Saudi Arabia.

Imran expressed Pakistan’s support for Saudi Arabia and “its full stand with all its potentials in confronting these sabotage acts which threaten the global economy and the Kingdom’s security.”

The attack on installations in the heartland of Saudi Arabia’s oil industry, including the world’s biggest petroleum-processing facility at Abqaiq, came from the direction of Iran, and cruise missiles may have been used, according to a senior US official. This is the third time that the two leaders have spoken over the phone since August, as Imran continues to raise the issue of Kashmir at different platforms.

The foreign minister said that the present government has presented the Kashmir dispute in the UN Security Council and after fifty-four years the issue was discussed in the world body.

He said that the Kashmir issue should be resolved according to international law and now the international community is also demanding to end curfew in Kashmir.

He announced that he is also going to Saudi Arabia with Imran where Kashmir issue would be highlighted.

He said the OIC forum has also been activated to raise Kashmir issue before international community.

Also on Tuesday, a delegation of the International Monetary Fund (IMF) met Imran Khan in Islamabad hours after its arrival for talks to review the country’s economic reforms, the prime minister’s office said.

No detail of the meeting was given in a brief statement issued by the prime minister’s office.

Earlier, Resident Representative Office of the IMF in Pakistan said on Twitter that Director for the Middle East and Central Asia Department Jihad Azour is leading the delegation.

The delegation will exchange views on recent economic developments, the outlook, and the performance of the government’s economic programme supported by the Fund, he said.

IMF had approved a three-year bailout package worth $6 billion for Pakistan in July this year to support the country’s economic reform programme.

Pakistan has already received the first tranche of $991.4 million under its $6 billion loan programme for Pakistan, according to a spokesperson for the State Bank of Pakistan (SBP).

Official sources said the IMF delegation will hold talks with the officials at the ministry of finance and other ministries including Adviser to Prime Minister on Finance, Revenue and Economic Affairs Abdul Hafeez Shaikh on Pakistan’s economic reforms. IMF has been urging Pakistan to mobilise domestic tax revenue to fund much needed social and development spending while placing debt on a firm downward trend.

Separately, Pakistan Tehrik-e-Insaf (PTI) lawmakers were taken by surprise when one of their colleagues threatened in the National Assembly to resign if his voice against price hike and inflation went unheard.

“I will resign and even I am ready to sacrifice this seat for 10 times if I am stopped from speaking for problems of the common man and against increasing prices of gas, electricity, roti (bread) and essential commodities,” Noor Alam Khan, who was elected on PTI ticket from Peshawar, said.

Pakistan and Saudi Arabia have no differences. Saudi has its own foreign policy. We shouldn't think that because we want something Saudi will do just that, Khan said in a late Tuesday interview