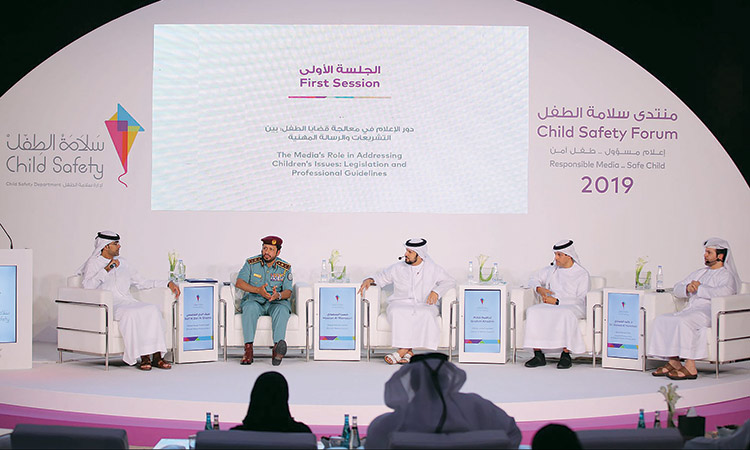 Panellists hold a discussion during the first Child Safety Forum in Sharjah on Tuesday.

Participating in the first Child Safety Forum held in Sharjah on Tuesday, the government representatives from childcare and protection, youth, judicial and executive authorities, and media personnel called for stronger and collaborative approach for child protection.

Organised by the Child Safety Department (CSD), Sharjah, under the title ‘Responsible Media... Safe Child,’ the seminar stressed on the need to shift focus from segregation of individual responsibility to the creation of an environment where child protection is a collective responsibility fulfilled by parents, the government, lawmakers and media.

CSD Director Hanadi Saleh Al Yafei said that the objective behind this event was to motivate media professionals and state authorities to take charge in securing the rights of the child.

Panel sessions highlighted the media’s and community attitude towards child safety issues. The discussions threw light on the reality of UAE media in context of children’s welfare and safety issues.

Major General Saif Al Zari Al Shamsi, Commander-in-Chief of Sharjah Police, noted that child safety in Sharjah is a top priority for the police department.  He emphasised the importance of the media’s role in enhancing community awareness through positive examples and by not portraying negative images of the child.

“I request media to be more positive in their interactions with people, not just children. We need to be very careful while writing about children, because the child’s family might get deeply affected.”

He said, “The media is always under the spotlight because it’s a major input in shaping public opinion. But why are they blamed singularly? Isn’t the responsibility to protect our children a collective duty?”

Dr. Waleed Khaled Al Hammadi, Senior Deputy Prosecutor, Director of Juvenile Prosecution at Sharjah Public Prosecution, noted that child protection laws in the UAE have been in place since the 1970s and are stronger than ever with the introduction of Wadeema’s Law (now the Child Rights Law).

“Of course, our country offers people the ability to sue offenders, but we need to be aware and committed to these laws and follow them because the psychological effects of abuse on children, even bullying, are sometimes irreversible. That’s why adherence to laws is paramount,” he stressed.

Alia Al Kaabi, Head of Family and Child Prosecution at Abu Dhabi Judiciary, who was among the audience, stressed on the need for united efforts not just in Sharjah, but across the UAE.

“Collaboration is a must if we are to make our nation the world leader in child protection and safety. Yes, media has a crucial role to play in projecting children’s issues without publishing their private details, but what about the role of parents? Most of our children have their own smartphones these days, because it is an easy escape for parents.

“Do we vet the sites they are accessing or games they are playing? Children as young as 2 or 3 are being dragged into unthinkable situations because we don’t play our part to ensure they are safe. If we want a strong awareness culture for child safety, we need to build it together,” she said.

The panellists said that the media had a greater role to play when it came to reporting incidences of child abuse, neglect, or accidents, stressing the need to leverage their public outreach to sensitise community to safety regulations and legislation as a follow-up to their reportage on these matters.