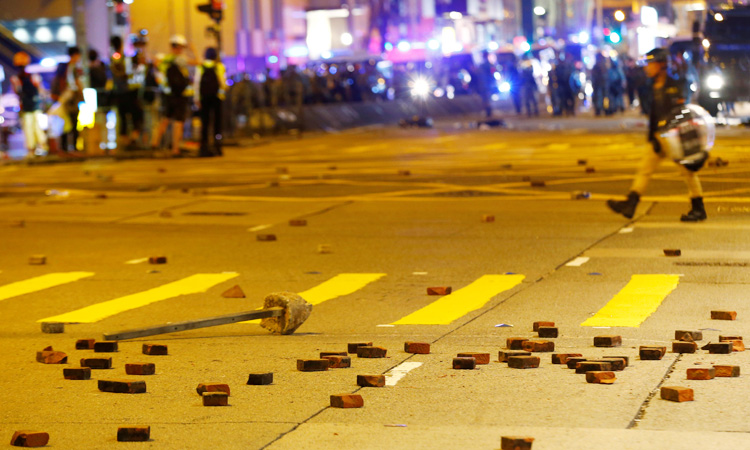 Thousands of anti-government protesters, many clad in black masks, caps and shades to obscure their identity, had raced through the streets, engaged in cat-and-mouse tactics with police, setting street fires and blocking roads in the heart of the former British colony where many key business districts are located. 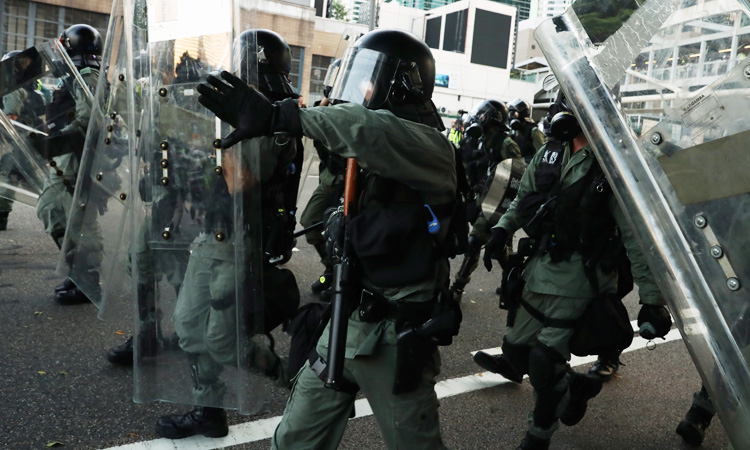 Riot police walk during an anti-government demonstration in Hong Kong.

Authorities moved quickly to douse the fires and police fired volleys of tear gas to disperse them, including in the bustling shopping and tourist district of Causeway Bay.

Police issued a statement early on Monday expressing “severe condemnation” after what began as a mostly peaceful protest had spiralled into violence in some of the Chinese territory’s key business, shopping and tourist districts.

Around 20 “radical protesters” had attacked two police officers on Sunday evening, hurling petrol bombs, bricks, and threatening the safety of the officers, the statement said. 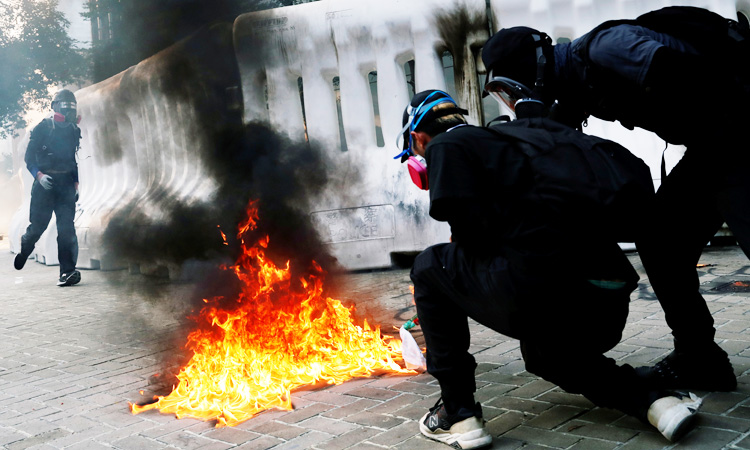 An anti-government protester prepares to throw a Molotov cocktail during a demonstration near Central Government Complex, in Hong Kong.

The demonstrations were the latest in over three months of sometimes violent protests, with protesters angered by what they see as creeping interference by Beijing in Hong Kong’s affairs despite promises by Beijing to grant the city wide-ranging autonomy and freedoms denied in mainland China.

The initial trigger for the protests was a contentious extradition bill, now withdrawn, that would have allowed people to be sent to mainland China for trial.

The protests have since broadened into other demands including universal suffrage and an independent inquiry into allegations of excessive force by the police.

At least 18 people were injured, three of them seriously, during Sunday’s violence, according to the Hospital Authority. 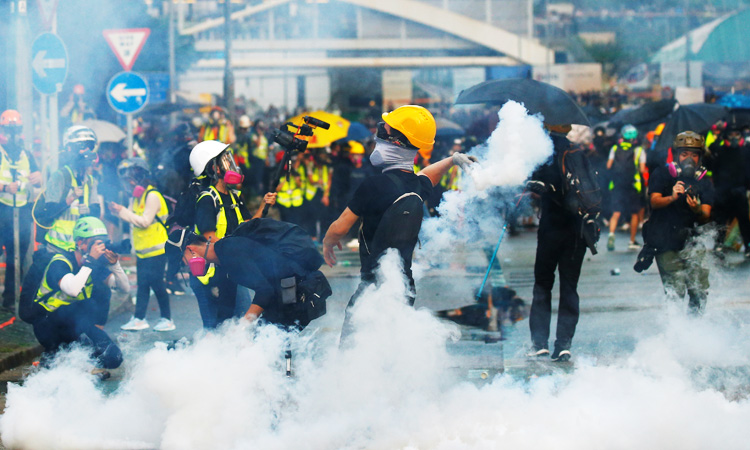 An anti-government protester throws back a tear gas canister at the police during a demonstration near Central Government Complex in Hong Kong.

Nearly 1400 people have been arrested since the protests started in June, but police gave no update on the number arrested over the weekend.

The protests have weighed on the city’s economy as it faces its first recession in a decade, with tourist arrivals plunging 40 percent in August amid some disruptions at the city’s international airport.

By Sunday evening, the running battles between anti-government protesters and police had spilled into street brawls between rival groups in the districts of Fortress Hill and North Point further east on Hong Kong island, where men in white T-shirts, believed to be pro-Beijing supporters, some wielding hammers, rods and knives, clashed with anti-government activists. 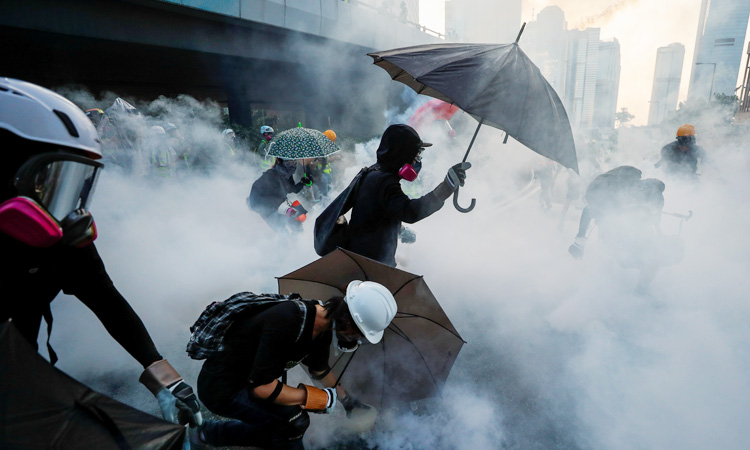 Anti-government protesters protect themselves with umbrellas among tear gas during a demonstration near Central Government Complex in Hong Kong.

On a street close to North Point, home to a large pro-Beijing community, a Reuters witness saw one man in a white T-shirt sprawled on the ground with head wounds.

Police eventually intervened and sealed off some roads to try to restore order, and they were seen taking away several men and women from an office run by a pro-Beijing association. 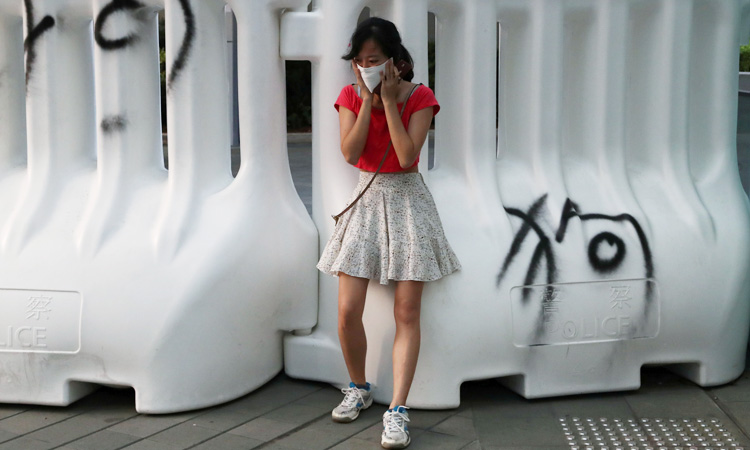 A woman covers herself from tear gas during an anti-government demonstration near Central Government Complex in Hong Kong.

Democratic lawmaker Ted Hui was arrested for allegedly obstructing the police, according to his Democratic Party’s Facebook page, as he tried to mediate on the streets in North Point. 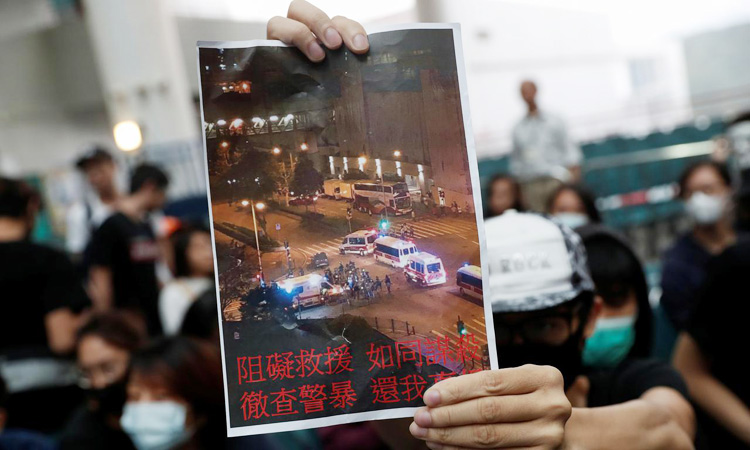 A student at a Hong Kong university who fell during protests at the weekend died early on Friday morning, marking the first student death during the anti-government demonstrations that have roiled the city