National Ambulance team goes an extra mile to save a life 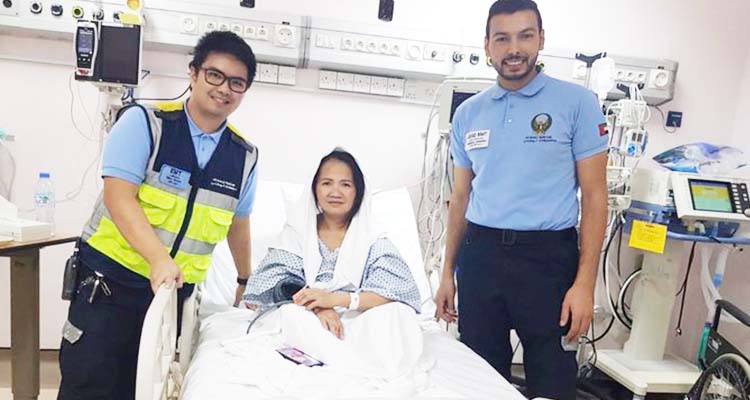 Readily putting themselves at risk to save other people's lives, the EMT Team with the leadership of Mohammed Alshdaifat, went that extra mile to save yet another life.

National Ambulance team arrived on scene in response to a report of a shift worker, when he found four of his colleagues in Ras Al Khaimah, unconscious, in the accommodation they live in.

Suspecting that the cause of the injuries was a potential gas leak, the EMTs immediately put on their mask and moved the patients out of the dangerous situation.

They were all found to be in critical condition.

After receiving proper treatment, three of them regained consciousness and were transferred to the hospital.

The EMT team leader, Mohammed Al Shdaifat was quick to apprehend that there could be other people on site who could be at risk.

He asked the Police on site to check if there was anybody else in the building.

The police knocked and there was no response but Al Shdaifat coaxed them to enter the building to ensure there were no potential victims inside.

Following which an unconscious lady was found on the floor. The EMT team leader with the help of his partner Nino David was quick to respond and saved her life.

Al Shdaifat said: “Saving lives is part of our job but in this case it meant even more as we went the extra mile in our work.”

David said: “This was an example of teamwork and excellence by National Ambulance in saving lives and serving the community.”

The patient, Gina Dometita, said: “I am so grateful to the team at National Ambulance for saving my life. The first I knew when I woke up in the hospital and seeing the faces of the people who saved me brought me so much joy.”