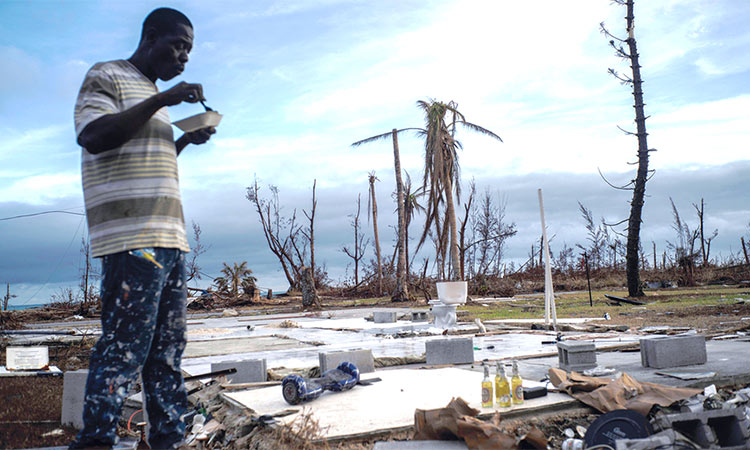 Jeffrey Roberts eats while searching through the rubble of his relatives’ home in Pelican Point on Saturday. Associated Press

The US National Hurricane Center (NHC) said the centre of the storm, packing maximum sustained winds of 80kph, was passing on Saturday evening about 110km north of Great Abaco Island, one of the areas hardest hit by Dorian.

Humberto was moving away from the Bahamas on a path taking it well off the east coast of Florida this weekend and early next week, the NHC said.

It’s expected to strengthen into a hurricane late Sunday but is not expected to impact the Bahamas or the US by that point.

About 5-10cm of rain were expected in most areas, with isolated flooding in low-lying areas, the Bahamian National Emergency Management Agency (NEMA) cautioned.

The storm briefly shuttered a couple of small airports, sent people in damaged homes to seek shelter and threatened to interrupt the distribution of sorely needed supplies, including food and water.

Jeffrey Roberts lifted a mustard-yellow curtain from the ground to hunt for passports and other documents at the place where his family’s home stood before Dorian blasted into Grand Bahama Island.

What was underneath was sodden and unrecognisable. He shuffled across a white tile floor, the only clear sign this had once been a house, and found a pair of rusty old pliers, only to toss them in frustration.

They clattered across the tiles, breaking the silence that had enveloped the fishing community of McLean’s Town.

Roberts was one of thousands of people beginning to return to salvage what few scraps they can from the devastation of Dorian.

“We got to take what God gives us,” Roberts said.

“Significant storm surge is not expected in the northwestern Bahamas from this system,” the Miami-based NHC said -- good news for residents of Abaco and Grand Bahama still trying to get back on track after Dorian swept through early this month.

“I know this is not something people in Abaco and Grand Bahama would like to hear at this time, but it’s out there and the storm will bring heavy downpours over the Bahama islands,” Shavon Bonimy, senior meteorologist in Grand Bahama, told The Nassau Guardian.

“So we have to be prepared.”

NEMA spokesman Carl Smith told reporters on Friday that the storm would likely “slow down logistics” of relief efforts, but added: “We have contingency plans in place.”

So far, the death toll from monster storm Dorian is at 52, but officials say that number is likely to go up. About 1,300 people are still unaccounted for, but Smith said officials are working to cross-reference new data and locate the missing.

Former Bahamian prime minister Hubert Ingraham said earlier this week he feared the final death toll could be in the hundreds.

Meanwhile 71 people were staying in shelters on Grand Bahama island and 2,037 in shelters in New Providence, where Nassau is located, Smith said.

“I just landed in Abaco in the Bahamas. I’m horrified by the level of devastation -- I’ve never seen anything like this,” UN Secretary General Antonio Guterres tweeted on Saturday after travelling to the islands the day prior.

“#HurricaneDorian was not category 5, but category hell.”

“In our new era of climate crisis, hurricanes and storms are turbo-charged,” Guterres said.

“Science is telling us: this is just the start. Without urgent action, climate disruption is only going to get worse. Every week brings news of climate-related devastation.”

Guterres also tweeted on Saturday congratulations to the Bahamian government’s emergency storm operations center for their “leadership responding to this tragedy.” 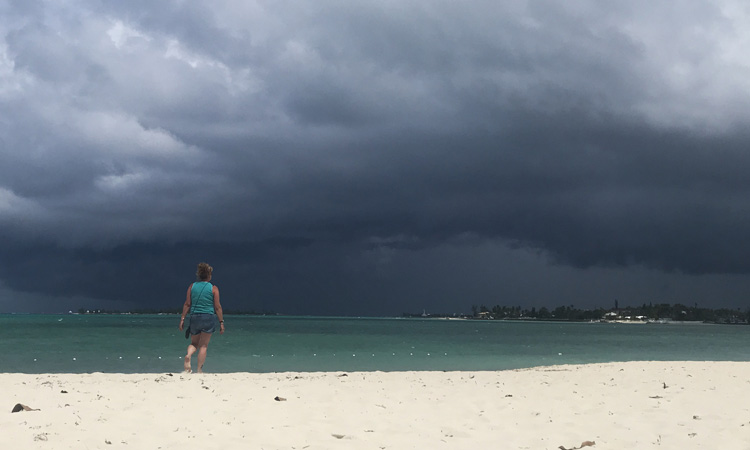