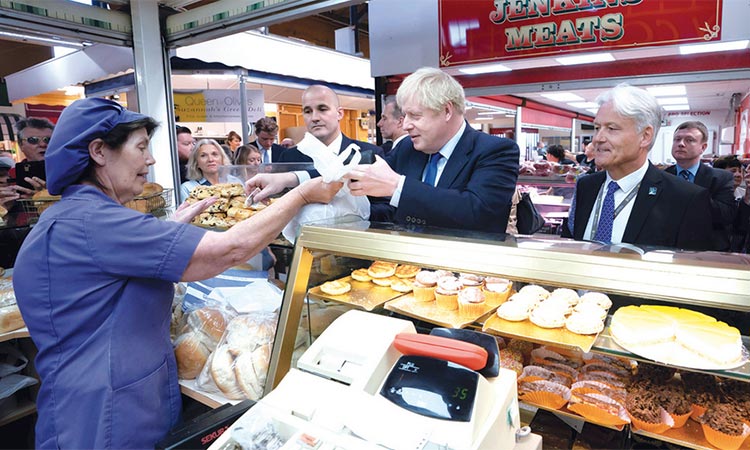 Boris Johnson pays for his purchase during his visit to Doncaster Market in Doncaster on Friday. Agence France-Presse

Britain’s parliamentary speaker has warned Prime Minister Boris Johnson not to disobey the law by refusing to ask for a Brexit delay and vowed to thwart any attempt to circumvent legislation.

Parliament passed a law earlier this month aimed at preventing a no-deal Brexit, but Johnson is adamant Britain will still leave the EU on schedule on Oct.31 with or without a withdrawal agreement.

The speaker of Britain’s House of Commons John Bercow said disobeying the law “would be the most terrible example to set to the rest of society,” according to Britain’s Press Association news agency.

In a speech in London on Thursday, Bercow warned if the government comes close to doing so, parliament “would want to cut off such a possibility and do so forcefully.”

“If that demands additional procedural creativity in order to come to pass, it is a racing certainty that this will happen, and that neither the limitations of the existing rule book nor the ticking of the clock will stop it doing so.”

His comments came after Johnson denied he had lied to Queen Elizabeth II when requesting a suspension of parliament this month.

Johnson asked the British head of state to shutter parliament for five weeks from last Tuesday, claiming it was necessary ahead of rolling out a new domestic agenda.

The unusually long suspension − known as prorogation − was widely seen as a bid to thwart opposition to a no-deal departure on the October 31 Brexit date, and provoked uproar across the political spectrum as well as legal challenges.

Asked on Thursday if he had misled Queen Elizabeth over his motives for the suspension, which will see the House of Commons closed until October 14, Johnson said: “Absolutely not”.

Meanwhile in Brussels, EU chief Brexit negotiator Michel Barnier said there was “no reason to be optimistic” about striking any divorce deal with Britain before a crucial October 17-18 EU summit.

Problems are mounting for Johnson, who finds himself increasingly boxed in on Brexit.

His government was forced on Wednesday to release its no-deal Brexit contingency plans after a parliamentary vote.

And Scotland’s highest civil court on the same day sided with critics of the prorogation, ruling it was “unlawful” and intended to “stymie parliament”.

The government has appealed the decision and the case is set to be heard in Britain’s Supreme Court on Tuesday.

In the meantime, parliament remains suspended.

Tom Brake, Brexit spokesman for the pro-EU opposition Liberal Democrats, said the government was withholding internal documents, messages and emails about the decision to prorogue parliament.

“I suspect that those documents... will confirm that the prime minister lied about the reason why,” he told AFP.

“We all know that the reason he wanted to shut down parliament is because he didn’t want parliament holding him to account.” Johnson also vowed Thursday that Britain will be ready for a no-deal departure from the EU on October 31, despite his own government’s assessment that planning remained “at a low level.”

The prime minister insisted the government had been “massively accelerating” its preparations since the August 2 internal report, which was disclosed on Wednesday after MPs voted for its release.

He called the “Operation Yellowhammer” forecast, which warned of possible civil unrest and shortages of food and medicines following a no-deal, a “worst-case scenario.”

“All the industries that matter will be ready for a no-deal Brexit,” Johnson said.

The documents painted a grim picture of possible “public disorder and community tensions” as well as logjams at Channel ports, threatening supplies, after a no-deal departure.

Johnson took office in July promising to implement the 2016 referendum decision by leaving the EU on October 31 no matter what.

But he lost his parliamentary majority last week after a series of defections and expulsions from his governing Conservative Party amid opposition to his strident Brexit stance.