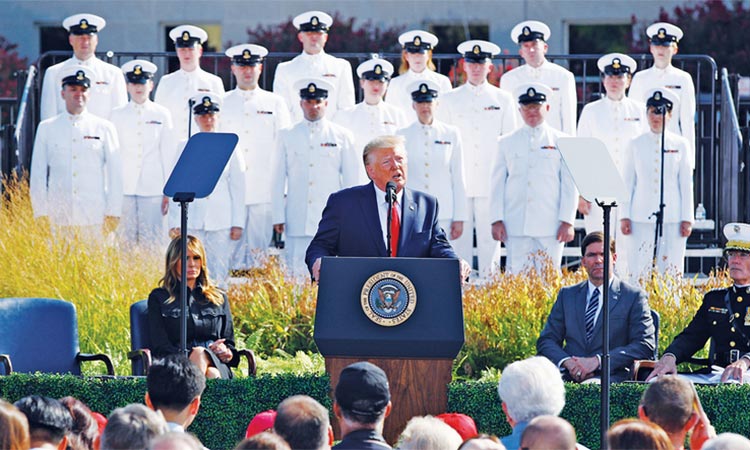 Donald Trump speaks during a ceremony in observance of the 18th anniversary of the Sept.11 attacks at the Pentagon in Washington on Wednesday. Associated Press

President Donald Trump gets some of his worst marks from the American people when it comes to his handling of climate change, and majorities believe the planet is warming and support government actions that he has sometimes scoffed at.

While the administration has rolled back regulations to cut emissions of heat-trapping carbon dioxide from power and industrial plants and pushed for more coal use, wide shares of Americans say they want just the opposite, according to a new poll from The Associated Press-NORC Center for Public Affairs Research.

About two out of three Americans say corporations have a responsibility to combat climate change, and a similar share also say it’s the job of the US government.

But 64 per cent of Americans say they disapprove of Trump’s policies towards climate change while about half that many say they approve.

That 32 per cent approval of his climate policies is the lowest among six issue areas that the poll asked about, including immigration (38 and health care (37 per cent).

Ann Florence, a 70-year-old retiree and self-described independent from Jonesborough, Tennessee, said she faults Trump on climate change “because he doesn’t believe it’s happening. It is changing if he would just look at what’s happening.”

While a majority of Republicans do approve of Trump’s performance on climate change, his marks among the GOP on the issue are slightly lower compared with other issues.

Meanwhile, 7 per cent of Democrats and 29 per cent of independents approve of Trump on climate change.

Ricky Kendrick, a 30-year-old in Grand Junction, Colorado, said he is contemplating leaving the Republican Party, partly over its denial of climate change.

“They don’t see it as a priority at all,” Kendrick, a hardware salesman in the heart of western Colorado’s energy belt, complained of the president and his party.

“There are some (weather) things happening that I’ve never seen before. Something’s changing.”

He was alarmed at Trump’s departure from the Paris climate accord and wants the US to reduce offshore drilling, end subsidies for fossil fuels and ramp up those for renewable energy.

While the poll finds about half of Americans want to decrease or eliminate subsidies for fossil fuels, a similar share say subsidies for renewable energy should be increased.

But will Trump’s climate change denial — often voiced in tweets — matter in 2020?

“Climate has not historically been what people vote on, but I think the tides are changing on that,” said University of Maryland sociologist Dana Fisher, who studies the environmental movement.

She said her research shows that young people, who don’t vote in large numbers, are activated by climate change.

Climate change is becoming more of a national priority among Democrats but not Republicans, said Tony Leiserowitz, director of the Yale Program on Climate Change Communication. It might make a difference in a close race, he said.

According to the AP VoteCast survey, 7 per cent of voters in the 2018 midterm election called the environment the top issue facing the country.

In the new poll, roughly three out of four Americans say they believe climate change is happening and a large majority of those think humans are at least partly to blame.

There’s a large gap between partisans on the issue.

Ninety-two per cent of Democrats say climate change is happening, and nearly all of those think it’s caused at least equally by human activity and natural changes in the environment. 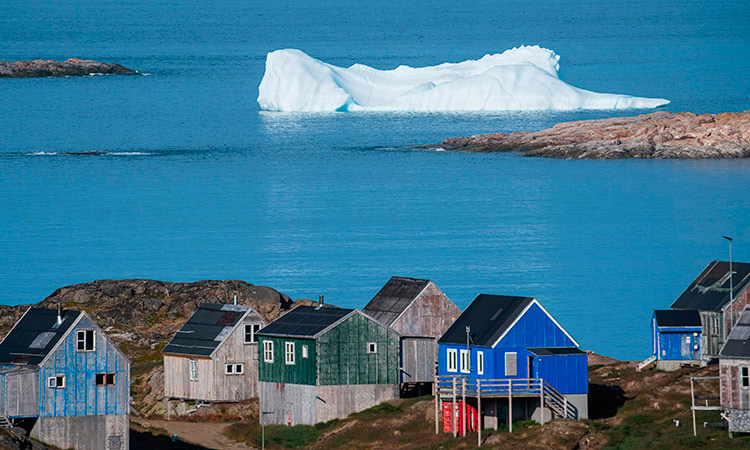