US to keep 5,500 troops at Mexico border - GulfToday

US to keep 5,500 troops at Mexico border 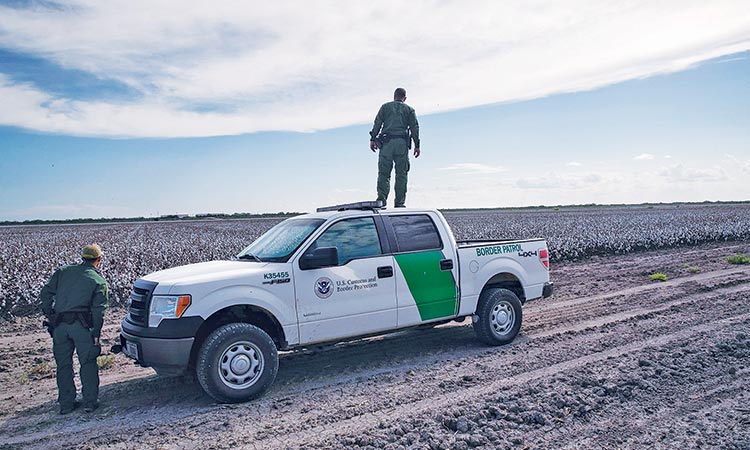 US Border Patrol agents search for undocumented immigrants in a cotton field near the US-Mexico border. Associated Press

The US Defence Department said on Tuesday that it would keep up to 5,500 troops deployed at the Mexican border for the coming year to help combat illegal immigration.

A week after announcing it would divert $3.6 billion in funds for the construction of an anti-migrant wall on the frontier, the Pentagon said it had also approved a request from the Department of Homeland Security to maintain a troop presence as well.

The increased military presence on the US side of the border mirrors a significantly expanded deployment by Mexican troops, following pressure from President Donald Trump, including threat of trade sanctions.

However, the statement also echoed repeated demands from US officials this week for Mexico to do still more in the cross-border crackdown.

Ebrard told reporters that the meeting had been “friendly” and while there were still disagreements on how to handle asylum seekers, the crisis situation between the two huge neighbours and trading partners appeared to have been defused.

“The risk of confrontation between Mexico and the United States is getting more and more distant,” he said.

Trump’s administration argues that the border is inadequately protected against out-of-control illegal migration, while opponents accuse Trump of demonizing immigrants for political gain.

The US deployment, which began nearly a year ago, was approved by Defense Secretary Mark Esper for the coming fiscal year beginning October 1.

Currently around 2,900 soldiers and 2,000 reservists are operating at the border.

Mitchell said using military personnel to bolster a civilian operation to detain tens of thousands of people attempting to enter the country illegally each month had no significant impact on the US military’s combat readiness.

“These missions can be supported with manageable impacts to readiness, and are contingent on the availability of funds and the continued statutory authority to provide such support,” he said.