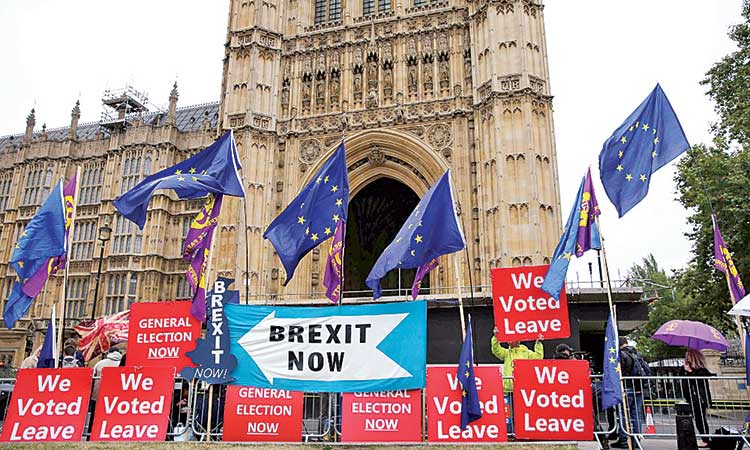 Pro-Brexit protesters stand with placards and EU flags outside the Houses of Parliament in London on Monday. Agence France-Presse

British Prime Minister Boris Johnson met his Irish counterpart in Dublin on Monday as he battles to salvage his hardline Brexit strategy and force an early election in the face of fierce opposition in Westminster.

Johnson held talks with Leo Varadkar amid an apparent stalemate in the Brexit process and as MPs look set to vote down his second bid for a snap poll next month.

The British leader has vowed to take Britain out of the EU by Oct.31 with or without a formal divorce deal − despite warnings that the latter scenario would entail economic chaos.

He wants the bloc to scrap a special provision in the deal agreed by his predecessor Theresa May to keep the Northern Irish border open in all circumstances after Brexit, arguing “alternative arrangements” exist.

“I won’t say that we can do it all today, but I believe there is a deal to be done by Oct.18,” a characteristically upbeat Johnson said ahead of his first face-to-face talks with Varadkar since taking office in July.

He added that failing to find a compromise, resulting in Britain leaving the bloc without a deal, “would be a failure of statecraft for which we would all be responsible.”

But Brussels and Dublin have insisted the so-called backstop mechanism must remain in place to guarantee no return to a hard border between and EU member Ireland and British-ruled Northern Ireland, which suffered decades of deadly sectarian violence.

“The backstop continues to be a critical component of the withdrawal agreement, unless and until an alternative is found,” Varadkar said, standing beside Johnson.

“We are open to alternatives. But they must be realistic ones, legally binding and workable.

“We have received no such proposals to date,” he added.

Johnson finds himself increasingly cornered just six weeks after taking over from May.

British MPs last week passed a law − set to get royal assent on Monday − that forces him to seek an extension to Brexit if he fails to agree a withdrawal deal at an October 17-18 EU summit.

Johnson, who had ordered parliament to be suspended from this week until mid-October in a bid to avoid such legislation, tried to call a snap election for next month in response.

But that would require the approval of two-thirds of MPs in parliament, which blocked the move last week.

Johnson will try again to force an October 15 election later Monday in another vote widely expected to fail.

The sense of chaos is being compounded by Johnson’s decision to suspend parliament − known as proroguing − for over a month.

It is set to begin late Monday and will see the House of Commons emptied until October 14.

Amid the fallout from that move, numerous MPs have defected or been sacked from Johnson’s party, leaving him without a working majority in parliament. Several members of his government have also quit, including his own brother.

Two of his most senior ministers both rejected speculation Sunday that Johnson had no real option but to resign.

But neither could say clearly how he intended to keep all his Brexit promises without somehow bending UK law.

“Of course he is not going to break the law,” Foreign Minister Dominic Raab told Sky News.

He added Johnson would “test to the limit” the law in court. “We have a plan, which is to stick to what we have been doing,” Interior Minister Sajid Javid told the BBC.

Rebel Conservative MPs insist their strategy to stop Johnson will prevail, however.

“I remain very, very confident we can stop no-deal because in the end parliament is sovereign,” said Rory Stewart, a former Tory lawmaker now forced to sit as an independent after rebelling against the government last week.

Meanwhile European leaders are sceptical that another delay designed to avoid economic disruption was still worth all the political pain.

“We are not going through this every three months.” All 28 current EU leaders would have to approve what would be the third Brexit extension this year.

However Varadkar indicated on Monday that if there was a “good reason” for another delay, the bloc would likely agree.