Johnson pledges to fight on despite Brexit blows - GulfToday

Johnson pledges to fight on despite Brexit blows 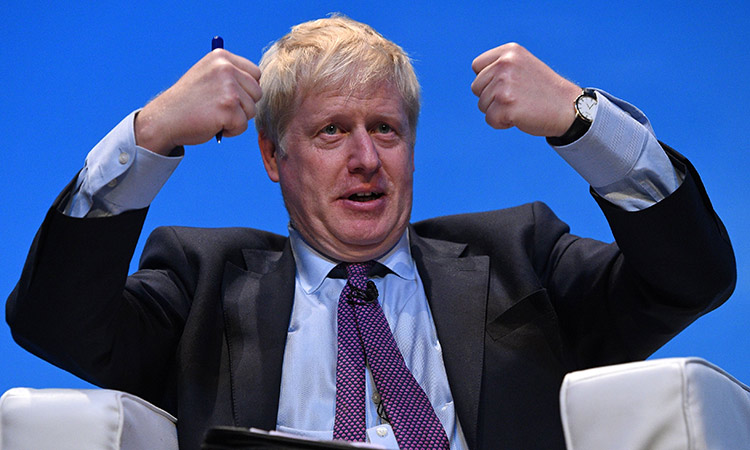 The British government insisted on Sunday that Prime Minister Boris Johnson would fight on despite seeing Amber Rudd, a top cabinet ally quit and his do-or-die Brexit strategy blocked by parliament.

French Foreign Minister Jean-Yves Le Drian on Sunday rejected any further delay to Britain’s exit from the EU, now scheduled for Oct.31, but clouded by political turmoil in London.

“In the current circumstances, it’s no! We are not going to go through this every three months,” Le Drian said on Le Grand Rendez-vous Europe1/CNEWS/Les Echos programme.

“The (British) say that they want to put forward other solutions, alternative arrangements so that they can leave,” he said, referring to Johnson’s efforts to find a way out of the backstop mechanism for Northern Ireland, the main sticking point.

“But we have not seen them and so it is ‘no.’ let the British authorities tell us the way forward,” he said.

“Let them take responsibility for their situation. They have to tell us what they want.”

Irish Prime Minister Leo Varadkar said on Sunday, the most likely venue for an agreement on an orderly British withdrawal from the European Union (EU) is the EU summit over Oct.17-18, dismissing any expectations of progress in his Monday meeting with Johnson.

“I don’t think the meeting tomorrow is a high-stakes meeting in that I don’t anticipate a big breakthrough,” Varadkar said when asked about his meeting with the British prime minister. “If we come to an agreement that will happen most likely in October at the EU summit.”

Johnson’s awful run at home got worse with the resignation on Saturday of Conservative heavyweight Rudd from her work and pensions post.

Rudd said on Sunday that the government is making little or no effort to secure a Brexit agreement with the EU, despite Johnson’s insistence that he wants a deal.

Rudd said “there is no evidence of a deal. There are no formal negotiations taking place.”

“What we know is that Angela Merkel and the EU have said, ‘give us your proposal,’ and we have not given them a proposal,” she told the BBC.

Treasury chief Sajid Javid insisted that the government was “straining every sinew to get a deal” and had sent British negotiator David Frost to Brussels for talks.

The EU, however, says Britain has not produced any concrete new ideas.

“The prime minister will not be resigning,” Javid told the BBC.

“He will be keeping this government’s promise to leave on the 31st.”

Yet Javid gave few specifics about what Johnson will do should parliament tell him to ask for an extension after turning down his election challenge.

“We have a plan, which is to stick to what we have been doing,” Javid said.

Foreign Secretary Dominic Raab suggested that one option would be for the government to challenge parliament’s potential delay request in court.

“It will be challenged in the courts,” Raab told Sky News.

“What we are going to do with that legislation is test very carefully what it does and doesn’t require and that’s not only the lawful thing to do, I think that’s the responsible thing to do,” Raab said. And Johnson himself said in a letter to two Sunday newspapers that his government would “simply carry on” if his election call is turned down.

“We will surmount all the obstacles in our path,” Johnson said.

“Whatever happens we will get ready to come out on Oct.31 and we will serve this country and its people with the energy and commitment they deserve.”

That message still appears to be resonating with British voters.

Three separate polls published on Sunday showed Johnson’s Conservatives either holding or extending their lead over the main opposition Labour Party to around 10 percentage points.

Last week Johnson kicked 21 lawmakers out of the Conservative group in Parliament after they sided with the opposition to pass a law designed to prevent a no-deal Brexit.