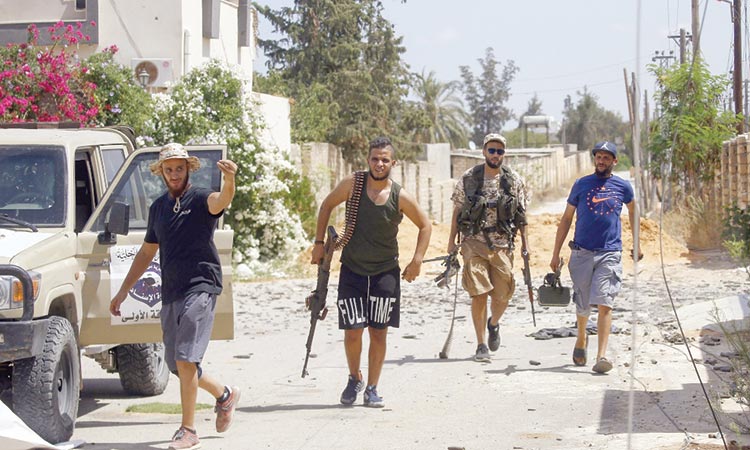 Libyan strongman Khalifa Haftar’s forces ruled out a UN call to return to the negotiating table, with his spokesman saying a military solution is the best way to resolve the conflict.

Libya has been wracked by chaos since the 2011 uprising in which its longtime leader Moamer Kadhafi was killed. In April, Haftar’s self-styled Libyan National Army launched an offensive to conquer the capital, Tripoli.

“The battle (for Tripoli) is in its final phases,” LNA spokesman General Ahmed Al Mesmari told a press conference.

“When the guns speak, diplomacy goes silent. The time of going back to dialogue is over,” he said. “The military solution is the best solution to spread security and reimpose the law.”

Haftar’s forces are fighting those of the United Nations-recognised Government of National Accord led by Fayed Al Sarraj.

Nearly five months after launching the offensive, the strongman’s forces remain locked in a stalemate against the GNA on Tripoli’s southern outskirts.

The UN special envoy to Libya, Ghassan Salame, warned on Wednesday that without action by the Security Council, the conflict could escalate if outside patrons step up support for the warring sides.

“Many Libyans feel abandoned by part of the international community and exploited by others,” he said.

The envoy said the country faced “two highly unpalatable scenarios” − either protracted low-intensity conflict, or increased support for the warring sides that would trigger a sharp escalation.

“The idea that war should be given a chance and that a military solution is at all possible is quite simply a chimera,” said Salame.

At least three fighters aligned with GNA were killed in an offensive on Saturday aimed at pushing back eastern forces led by Haftar, a witness said.

The clashes between the GNA forces and Haftar’s Libyan National Army (LNA) on Saturday morning came after nearly a month of calm.

LNA forces launched a surprise offensive in early April to attempt to take control of the capital Tripoli, where Seraj and his GNA are based.

“Three fighters allied to GNA from Misrata were killed in the offensive in Tripoli this morning,” the witness from the coastal city, some 200 km east of Tripoli, told Reuters.