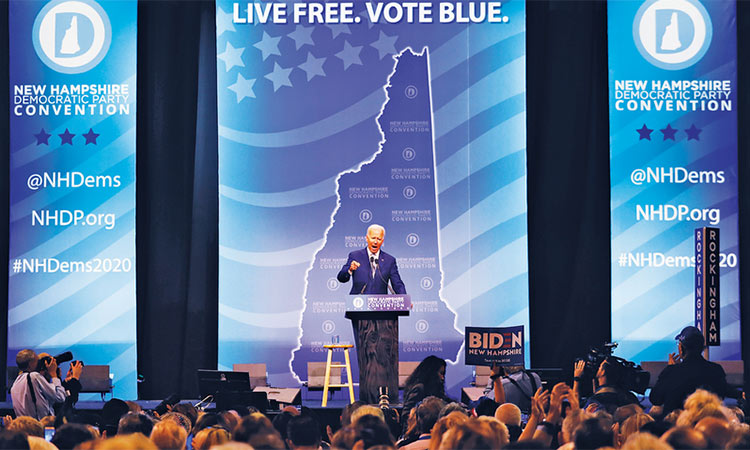 The candidates all will get the opportunity to speak from the stage and make the case that they’re the best Democrat to take on President Donald Trump.

Biden, the first candidate to speak, said Trump has “unleashed the deepest, darkest forces in this nation,” and the former vice president told New Hampshire voters: “We cannot, and I will not, let this man be reelected president of the United States of America.”

Biden is looking voters in the eye and promising to “end fossil fuel.”

Biden made the after a New Hampshire environmental activist challenged him for accepting donations from the co-founder of liquified natural gas firm.

The activist, 24-year-old Rebecca Beaulieu, later said she appreciated that Biden took her question seriously, but that she was not satisfied with Biden’s plan to eliminate net carbon emissions by 2050. She also said she found Biden’s use of “kiddo” patronising.

Democrats in New Hampshire have been slow to endorse so far this election system.

That’s due in part to the large number of candidates in the race as well as lingering tensions over the 2016 primary battle between Vermont Senator Bernie Sanders and former secretary of state Hillary Clinton.

Separately, Science took a beating in the political arena this past week as Trump sowed confusion about Hurricane Dorian’s path and Democratic presidential candidates rang false alarms about the air we breathe.

Trump found himself contradicted by his government’s own meteorologists when he warned of danger to Alabama, then spent days defending his outlier forecast. By week’s end, curiosity over who had drawn a loop on a weather map played out alongside life-shaping questions about who should, and shouldn’t, flee the storm.

On broader questions about climate, and air quality in particular, neither Trump nor some Democrats seem to be able to get it right.

Republicans in several states are set to decide whether they’ll cancel plans to hold presidential preference selections before the 2020 election.

It wouldn’t be unusual move by the party of the White House incumbent seeking a second term.

In meetings on Saturday, Republican parties in South Carolina, Kansas and Nevada are expected to debate canceling primaries, caucuses or other voting.

Arizona is expected to make a decision later in the month.

Several challengers to Trump have emerged, including Bill Weld , a former Massachusetts governor, and Joe Walsh , a former Illinois congressman. Others may join them.

In years past, both Republicans and Democrats have scrapped state nominating contests when an incumbent president from their party ran for a second term.

Meanwhile, Democratic presidential candidate Beto O’Rourke’s campaign on Friday called on Facebook, Twitter and Alphabet’s Google to do more to fight disinformation ahead of the November 2020 election.

The campaign made its plea in letters to the companies after a false claim spread on social media this week that the gunman responsible for an Aug.31 mass shooting in Odessa, Texas, had a sticker supporting O’Rourke’s candidacy on his truck.

In its letter to Twitter, the O’Rourke campaign pointed to an account with the handle @suemo54 and name Sue Moore, which posted the claim on Sunday.

It has been retweeted more than 11,000 times since then.

O’Rourke’s campaign manager, Jen O’Malley Dillon, said in the letters that the campaign thought a network of bots on Twitter and Facebook amplified the false claim.