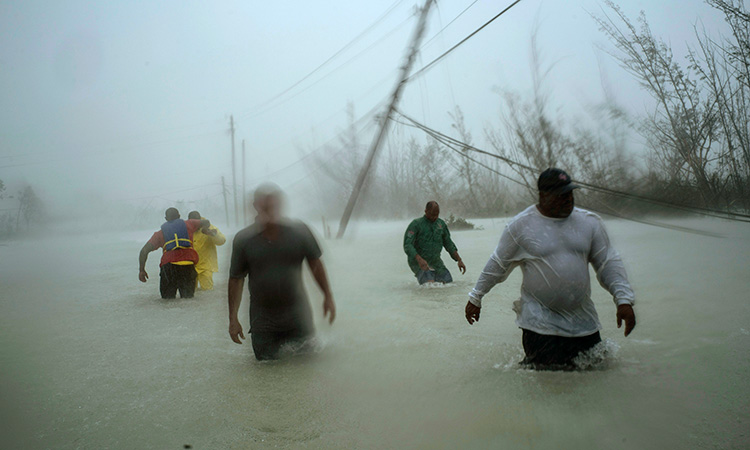 Volunteers wade through a flooded road to rescue families near the Causarina bridge in Bahamas. AP

The death toll from Hurricane Dorian's devastating rampage across the Bahamas rose to 43 on Friday, a number authorities said is likely to climb "significantly," even as rescuers plucked desperate survivors from the debris. 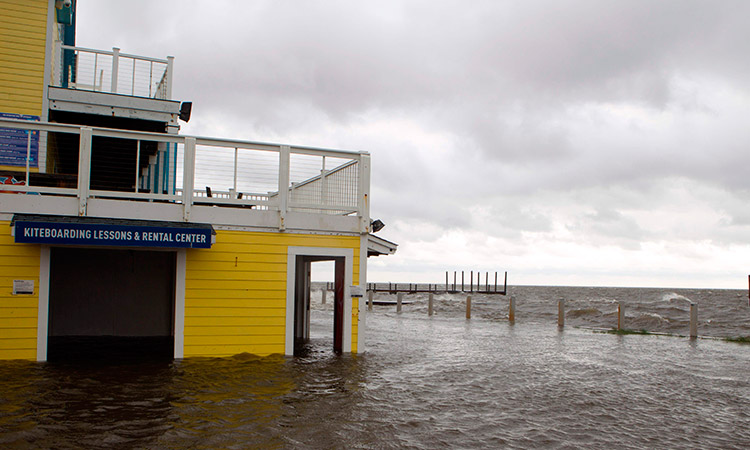 A flooded shop is seen next to Rodanthe Sound as Hurricane Dorian hits Cape Hatteras in North Carolina. AFP

Those who made it to safety awaited news of loved ones such as Diane Forbes, who had not heard from her two sons since Tuesday and was searching for them among some 200 evacuees sheltering at a gymnasium Friday night in Nassau, which was spared the wrath of the hurricane.

"They said they were hungry and the scent of the bodies, the dead, was really getting to them... I don't know if my son is alive or not," she said of one of her children, who had been in Marsh Harbour on Abaco with his girlfriend and her mother.

“As you know, in the United States, we weren't hit nearly as hard as was thought but the Bahamas, you got hit very, very hard.”

"The loss of life we are experiencing is catastrophic and devastating," he said in a statement late Friday quoted by The Tribune newspaper.

With many missing, "this number is expected to grow significantly," his spokeswoman Erica Wells Cox told NBC News.

On the eventual death toll, Health Minister Duane Sands earlier said "the number will be staggering."

"Literally hundreds, up to thousands, of people are still missing," Joy Jibrilu, the director general of the Bahamian tourism and aviation ministry, told CNN.

Thousands of people were left homeless on Grand Bahama and Abaco and many were becoming frustrated with the speed of relief and evacuation efforts. 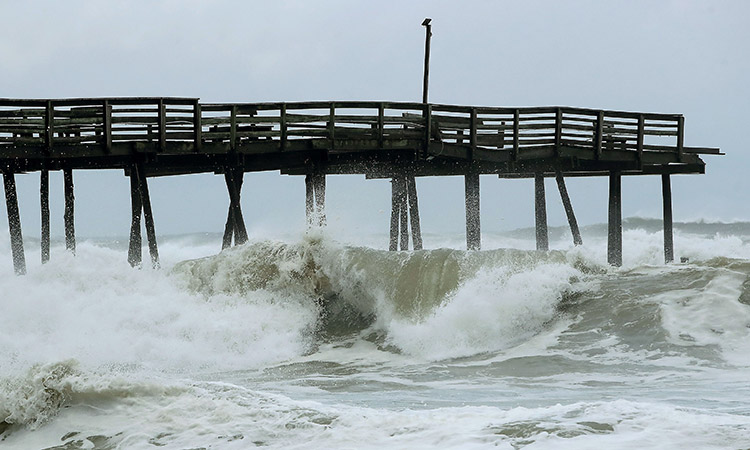 Waves crash under the Avalon Pier that was damaged by Hurricane Dorian in Kill Devil Hills, North Carolina. AFP

"There's no gas station, no food stores, my job is gone" said Melanie Lowe of Marsh Harbour, whose house was partially destroyed and had packed into a two-bedroom apartment with 16 people before arriving in Nassau.

According to UN relief officials, more than 70,000 people -- virtually the entire population of Grand Bahama and Abaco -- are in need of assistance after the storm reduced homes to matchsticks and destroyed people's livelihoods.

The US Coast Guard and private organizations have been evacuating residents of Abaco and other islands to Nassau. 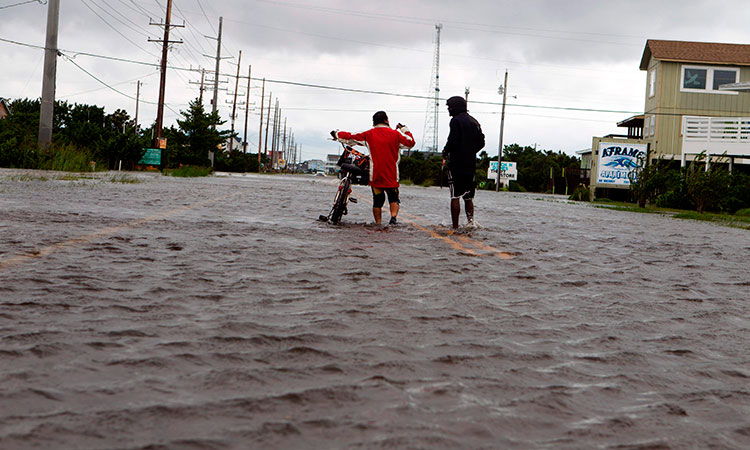 The multinational relief effort, which also includes Britain's Royal Navy and several non-governmental organizations, has been hampered by flood damage to airport runways, destroyed piers and docks and downed communications.

Tents and awnings installed at Nassau Airport, not far from rescue planes taking off and landing, provided temporary housing for storm-battered Bahamians.

As survivors began the first steps in rebuilding their lives, arrangements were being made to take care of the dead and the Bahamian authorities were seeking to account for the missing.

Sands said extra morticians and refrigerated coolers to store bodies were being sent to the affected islands. 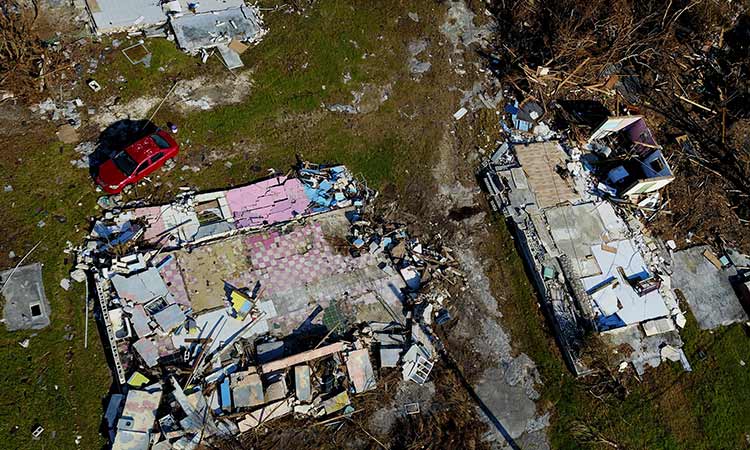 Mortuary workers in white hazmat suits, blue gloves and masks could be seen in Marsh Harbour carrying corpses in green body bags and loading them onto flatbed trucks.

"As you know, in the United States, we weren't hit nearly as hard as was thought but the Bahamas, you got hit very, very hard," US President Donald Trump said in a video statement on Twitter.

"Any cruise ship companies willing to act as stationary housing, etc., I am sure would be appreciated!," he also tweeted.

Dorian made landfall meanwhile in the United States as a Category 1 hurricane packing winds of nearly 90 miles per hour (150 kilometers per hour). 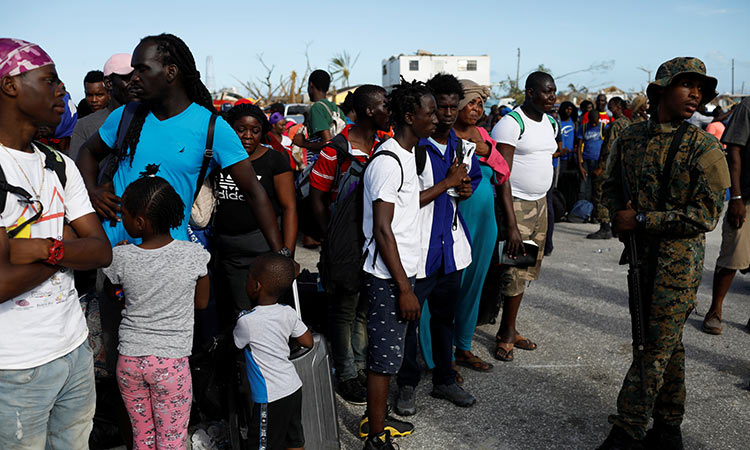 A soldier controls the crowd during an evacuation operation in the Abaco Islands, Bahamas. Reuters

The Miami-based National Hurricane Center (NHC) said the storm made landfall at Cape Hatteras on North Carolina's Outer Banks, the finger-like barrier islands off the coast.

Flooding was reported in the town of Ocracoke to the southwest of Cape Hatteras.

Thousands of coastal residents of US states from Florida to Virginia had been fearing the worst but the East Coast largely escaped unscathed.

Some flooding occurred in the historic city of Charleston, South Carolina, and tens of thousands of residents lost electricity but no major damage was reported.

At 2:00 am (0600 GMT) Saturday, the NHC said Dorian was about 170 miles south-southeast of Nantucket island and was producing tropical storm force winds in southeast Massachusetts as it heads towards Canada.

The storm was moving in a northeast direction up the Atlantic coast at 25 mph (41 kph), with hurricane-force winds expected in parts of the Canadian province of Nova Scotia later Saturday after Dorian's center passes to the southeast of New England.