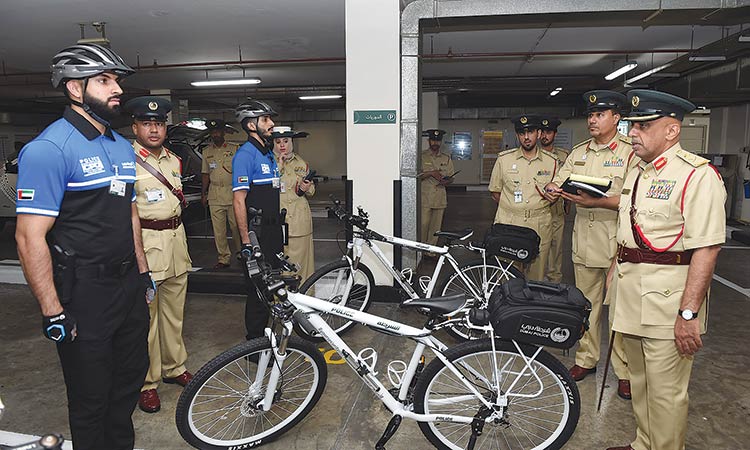 The Dubai Police’s bicycle patrols were praised for demonstrating high efficiency and performance.

Established just 18 months ago, by Major General Abdullah Khalifa Al Marri, Commander-in-Chief of Dubai Police, the 26-member Dubai Police bicycle patrols have been able to arrest 83 wanted, prevent potential crimes, and contribute to the arrest of residency violators and promoters of counterfeit goods who hide in residential and touristic alleys.

Their rapid movement, mobility, and prompt response to reports are the most prominent features of the teams who contributed to finding lost children and uniting them with their parents in record time, apart from carrying out social tasks and engaging in community events to serve community members and visitors of tourist areas.

Maj-Gen Al Marri praised Dubai Police bicycle patrols for demonstrating high efficiency and performance thanks to their high fitness levels and professional training. He also lauded their keenness to enhance the security and safety of the emirate of Dubai, and their valued contribution in establishing the reputation of Dubai Police in providing quality services to the public.

For his part, Major General Khalil Ibrahim Al Mansouri, Assistant Commander-in-Chief of Criminal Investigation Affairs, revealed that the cycling squad managed to arrest 83 wanted criminals in 18 months. He added that last year, the team carried out a campaign in cooperation with the Tourism Police Department in Umm Suqeim area near Burj Al Arab to achieve a zero crime rate which has succeeded in realising the required indicator during the specified period.

Brigadier Jamal Salem Al-Jallaf, director of the General Department of Criminal Investigations, said that Dubai Police aim to provide high-quality security services that testify to the reputation of Dubai Police as a world-class police force.

Lt. Al Zarouni said the cycling teams consisted of 26 personnel and four reservists, dispatched across in several vital and crowded areas, namely, La Mer, City Walk, Deira Souk, Bur Dubai, JBR, Al Muraqqabat, and Al Raqqa. They are also present at many sessional events and initiatives such as the Global Village and the Dubai Horse Racing.

Lt. Al Zarouni added that members of the unit joined many courses to qualify them for specialised tasks, including courses in self-defence, crowd control and public order, first aid, firefighting, using taser guns, monitoring violations, CPR, shooting while moving on the bicycles, and descending on stairs. They are also required to undergo different refresher courses every three months, and to cycle for long distances not less than 20 kilometres to maintain their fitness.

It was very easy for Corporal Rashid Salim, from Naif Police Station, who joined the Dubai Police Bicycle Patrols after years of serving for vehicle patrols, to spot the difference between both security approaches. “The nature of reports received by regular patrols differs, in type and seriousness, from those received by the bicycle patrols.” “We receive less serious reports and geographically limited as we have the advantage to move across narrow alleys and unpaved streets” Corporal Salim explained.

Corporal Salim said that a Saudi national stopped them in the downtown area and sought the Dubai Police Bicycle Patrols’ help after he had lost his four-year-old child. “We gathered some details and the description of the boy from the father, and we immediately initiated a search operation. Having the advantage of being able to manoeuvre and move swiftly across the area, we located the child in just 30 minutes hand him over to his father who was extremely overwhelmed with our timely response,” Salim recalled.

Policeman Ahmad Al Saadi, from Al Muraqqabat Police Station, said it was crucial for police bikers to have accurate security intuitions and the skills to read the body language of offenders and fugitives. He recalled being in Al Murraqabat area when he and his teammates spotted two Asians walking suspiciously around shops wearing backpacks. “We stopped them and inspected their backpacks, and we found robbery tools and bolt cutters. Investigations showed that they were planning on robbing one of the neighbouring shops,” Al Saadi explained.

He added that Dubai Police bicycle patrols, with the assistance of security personnel at the Burj Khalifa area, were able to find an eight-year-old child and return him to his mother in record time despite the dense crowd in the area.