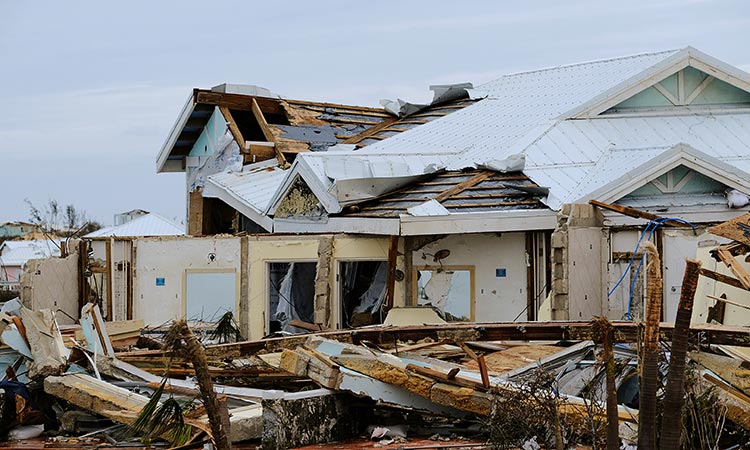 Damage in the aftermath of Hurricane Dorian on the Great Abaco island town of Marsh Harbour, Bahamas. Reuters

Minnis confirmed the storm's death toll had risen to at least 20 during a news conference in which he described the unthinkable damage that parts of his island nation had sustained. 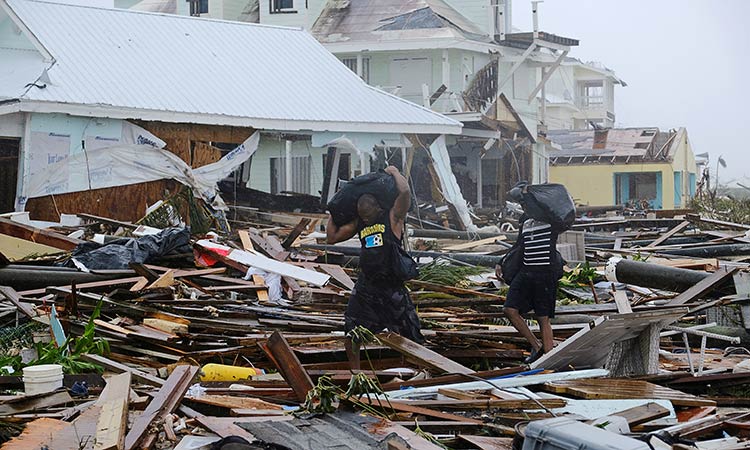 Damage in the aftermath of Hurricane Dorian in Bahamas. Dante Carrer/Reuters

The US Coast Guard and Britain's Royal Navy airlifted survivors and ferried in emergency supplies as floodwaters receded in the Bahamas, while the center of the strengthening storm continued toward South Carolina.

The Miami-based National Hurricane Center (NHC) said Dorian, which has already wrought major damage on its course through the Atlantic, was packing maximum sustained winds of 115 miles per hour (185 kilometers per hour), making it a Category 3 storm on the five-level Saffir-Simpson scale.

The United Nations said 70,000 people on Grand Bahama and Abaco islands were in "immediate need" of aid while the prime minister confirmed the grim new victim count.

"A big section of the Bahamas was hit like few people have seen before. They need a big hand."

He also issued a warning to looters, saying they will be prosecuted "to the fullest extent of the law" and announced the deployment of additional police and defense force officers.

Shelter, safe drinking water, food and medicine were urgently needed for some 50,000 people on Grand Bahama and between 15,000 and 20,000 on Abaco, UN emergency relief coordinator Mark Lowcock said after a meeting with Minnis.

"Speed is of the essence," Red Cross official Stephen McAndrew said of rescue operations on the two northernmost islands in the Bahamas archipelago which were pummeled by one of the strongest Atlantic storms on record. 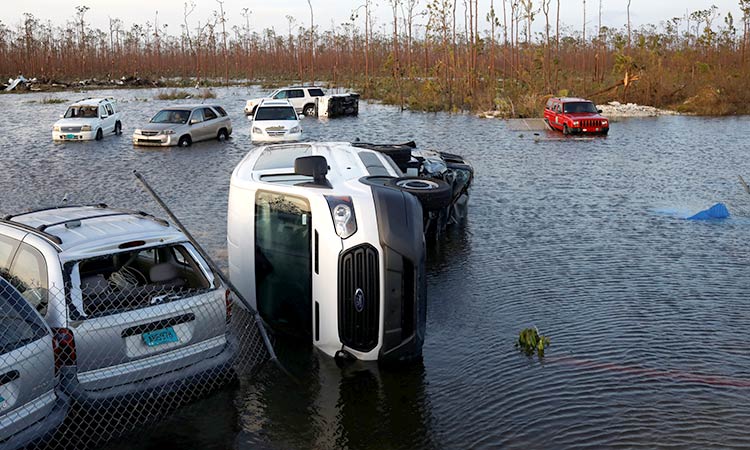 Cars are seen in a flooded parking lot in Marsh Harbour, Bahamas, on Wednesday. Marco Bello/Reuters

People on Grand Bahama were using jet skis and boats to pluck victims from homes flooded and pulverized by heavy rain and lashing winds from the monster storm.

President Donald Trump spoke by telephone to the Bahamian leader and pledged US assistance, the White House said.

"A big section of the Bahamas was hit like few people have seen before," Trump said. "They need a big hand." 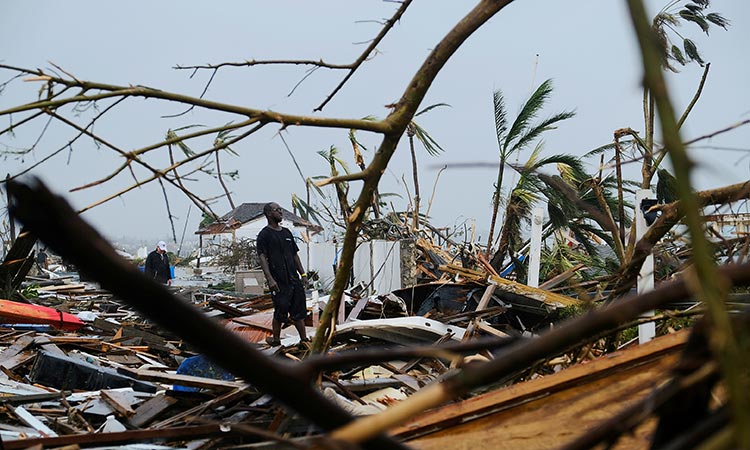 Damage in the aftermath of Hurricane Dorian in Bahamas. Reuters

It had, however, left Florida largely unscathed.

Life-threatening storm surge with significant coastal flooding was expected along large parts of the southeast and mid-Atlantic coast over the following days, the NHC said.

The center predicted the Carolinas could be hit with dangerous storm surge of up to seven feet (2.1 meters) and six to 12 inches of rain. 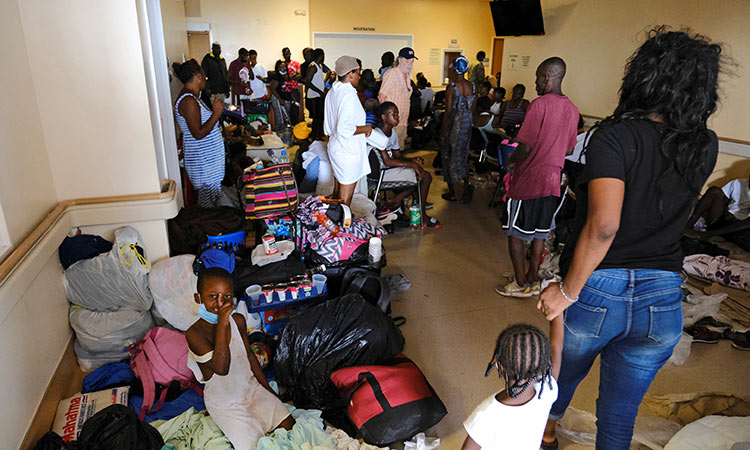 Patients and their families crowd the entrance of the Marsh Harbour Medical Clinic in Bahamas. Reuters

Larry Lewis, who runs Paradise Watersports in the city of Freeport on Grand Bahama, said most of the floodwaters had receded but some roads remained impassable.

He said very few stores were open. "I saw a lot of people scrapping for something to eat," he told AFP.

Roberto Smith, who was born in Abaco but now lives in Florida, said he was worried about his family.

"I spoke to my dad on the night of the hurricane, on Sunday night, and his roof blew up," Smith told AFP. "I haven't spoken to him since then. I am really worried. I can't even eat."

"The island is devastated," he added. "There is no power, no running water, no electricity."

The US Coast Guard said it had rescued 61 people including 19 injured patients from the Marsh Harbour clinic on Abaco island who were flown to Nassau on Tuesday.

USAID, the US relief agency, said meanwhile it was airlifting supplies such as plastic sheeting for shelter, hygiene kits and water from Miami. 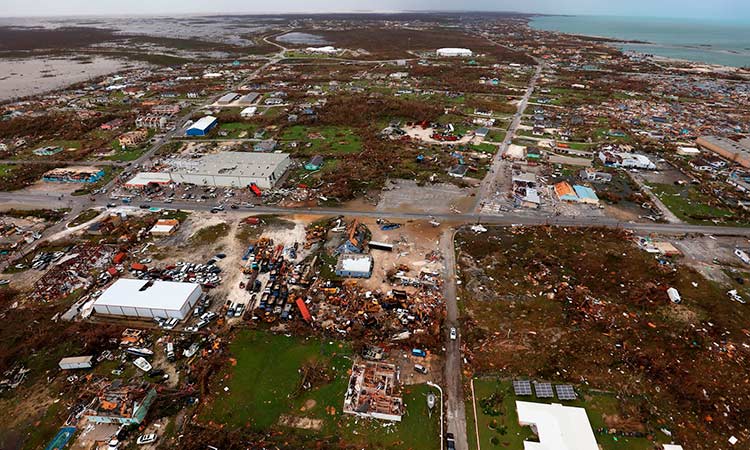 A handout aerial photograph shows the aftermath of Hurricane Dorian in the northern Bahamas. AFP

A British landing ship, the RFA Mounts Bay, launched boats carrying supplies for Marsh Harbour on Abaco and Britain's Department for International Development said it had deployed a team of three humanitarian experts.

"The clock is now ticking to get help to those in need," British International Development Secretary Alok Sharma said.

Dorian dumped as much as 30 inches of rain on the Bahamas, a former British colony which gained its independence in 1973 and is a member of the Commonwealth.

According to a midnight (0400 GMT) NHC bulletin, Dorian was located about 105 miles south of Charleston, South Carolina and was moving north at seven miles per hour.