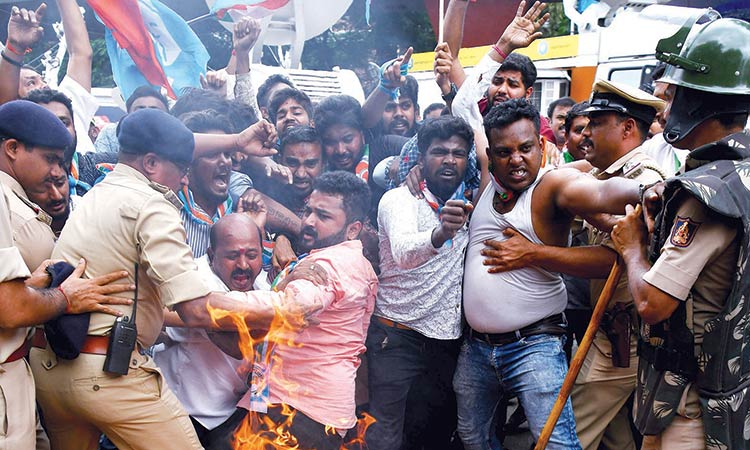 Members of the Karnataka Congress scuffle with police as they protest against the arrest of DK Shivkumar in Bengaluru on Wednesday. Agence France-Presse

The arrest of the Congress party’s Karnataka strongman DK Shivkumar, who had foiled several BJP attempts to topple his party’s government in the state, is “another example of vendetta politics unleashed by the government” at the Centre, Rahul Gandhi said on Wednesday.

“The arrest of DK Shivakumar is another example of the vendetta politics unleashed by the Govt, using agencies like the Enforcement Directorate (ED)/CBI and a pliant media to selectively target individuals,” Rahul tweeted.

Shivkumar, 57, was arrested in connection with a Rs8.83 crore money laundering case on Tuesday.

On Wednesday he was produced before special judge Ajay Kumar Kuhar, the same judge who had heard the case of Congress veteran P. Chidambaram. A Delhi court on Wednesday sent Shivkumar to the ED custody for 10 days, a day after the financial probe agency arrested him on money laundering charges.

He would be presented before the court again on Sept.13.

The Karnataka leader earlier underwent medical check up at Ram Manohar Lohia hospital, outside which Congress workers staged a protest.

The ED officials told the court that the Congress leader was not cooperating in the interrogation and that they were certain of his complicity in the money laundering case. Senior advocate Abhishek Manu Singhvi, who had been appearing Chidambaram, has moved a bail application for Shivkumar.

“Because the accused did not confess, can that be called non-cooperation? Where is the personal liberty here?” Singhvi asked.

“His statement was recorded for the last four days. He joined the Investigation, but ED says he was not cooperating... ED says he didn’t reveal the truth... what is the truth here? Truth according to the accused or to the agency? If truth as wanted by agency is taken into account, everyone will get arrested here,” Singhvi said.

Shivkumar had been in ED custody for four days. The agency recorded his arrest on Tuesday night under provisions of the Prevention of Money Laundering Act (PMLA).