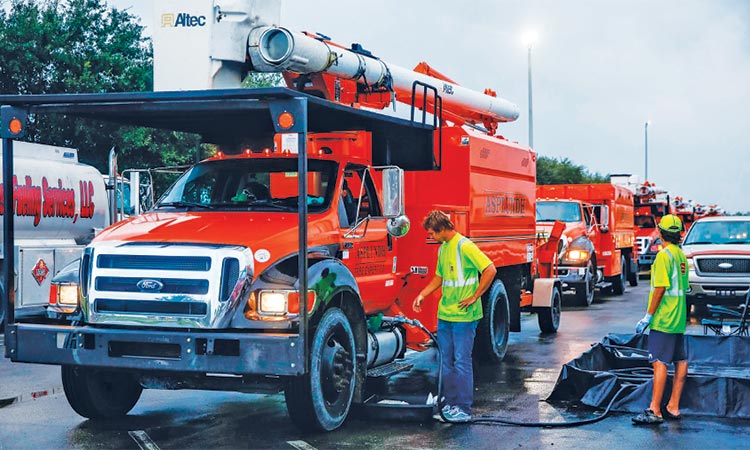 Rescue workers fill up their vehicle with gas as they await deployment in Fort Pierce, Florida, on Tuesday. Agence France-Presse

They estimate that at least 61,000 people will need food aid after the monster storm hit the islands, officials told reporters in Geneva.

And damage to the islands’ water system suggested that fresh water would be a priority in the coming days, said a statement from the UN’s humanitarian affairs agency, the OCHA.

But UN experts were waiting for government clearance before assessing the situation on the ground, said OCHA spokesman Jens Laerke.

The OCHA statement said the authorities on Abaco island were talking of “catastrophic damage”, while emergency officials on Grand Bahama were reporting massive flooding there.

Herve Verhoosel for the World Food Programme said their initial estimate suggested that 47,000 people would need food aid on Grand Bahama and another 14,000 on Abaco.

Bahamas Prime Minister Hubert Minnis said Monday the Category 5 storm killed five people after it made landfall, describing it as a “historic tragedy” for the archipelago.

The relief effort on the Bahamas will be coordinated by the Caribbean Disaster Emergency Management Agency (CDEMA).

Dorian was still pounding the islands on Tuesday, said the Miami-based National Hurricane Center in a statement issued at 0900 GMT.

And although it had weakened to a Category 3 storm, it warned: “Devastating winds and storm surge will continue to affect Grand Bahama Island for several more hours.” The Center also warned the nearby Florida east coast, as well as Georgia and South Carolina coast a little further north, to prepare for “hurricane-force winds.”

As Dorian ground to a standstill over the Bahamas, the tourism and aviation ministry announced the start of rescue operations “in parts where it is safe.” - ‘We are under water’ - For many, the wait for help to arrive has been terrifying.

A text message seen by AFP from a woman named Kendra Williams, who lives on Grand Bahama, said: “We are under water; we are up in the ceiling. Can someone please assist us or send some help. Please. Me and my six grandchildren and my son, we are in the ceiling.”

“People who thought they were safe are now calling for help,” Rigby said. “My best friend’s husband is stuck in the roof of their house with seven feet (two meters) water below.”

Initial Red Cross estimates were that 13,000 buildings may have been damaged or destroyed by Dorian in the Bahamas, officials in Geneva said.

Video posted on the website of the Tribune 242 newspaper showed water up to the roofs of wooden houses in what appeared to be a coastal town. Capsized boats floated in muddy brown water clogged with debris.

Meanwhile, Dorian crept towards the southeast coast of the United States on Tuesday, weakening slightly but remaining a dangerous storm after leaving a trail of death and destruction in the Bahamas.

At least five deaths have been reported in the Bahamas from a storm which Prime Minister Hubert Minnis called a “historic tragedy” for the Atlantic archipelago.

The Miami-based National Hurricane Center (NHC) said Dorian, which has dumped as much as 76 centimetres of rain on the Bahamas, had been downgraded from a Category 3 to a Category 2 storm on the five-level wind scale.

Dorian was located about 105 miles east of Fort Pierce, Florida, and moving in a northwesterly direction towards the Florida coast at a snail’s pace of two mph, it said.

The hazardous conditions would continue through much of Tuesday on Grand Bahama Island, which is the northernmost island in the archipelago and home to its largest city, Freeport, the NHC said. 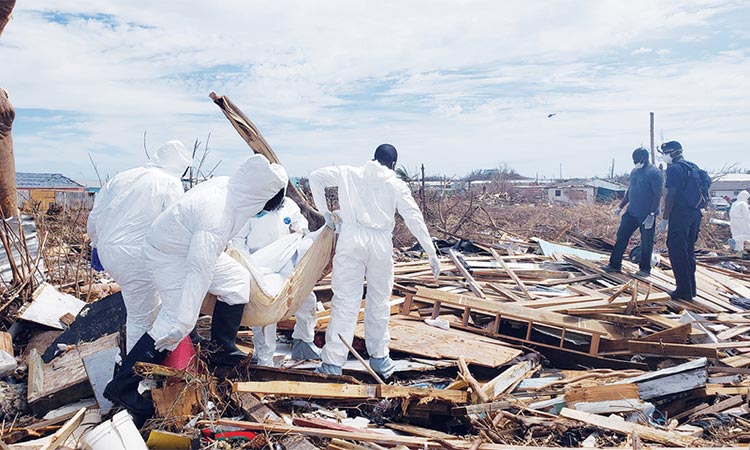 The Baptiste family steps off the ferry that brought them from Marsh Harbour, the port in the Bahamas that was flattened by hurricane Dorian. 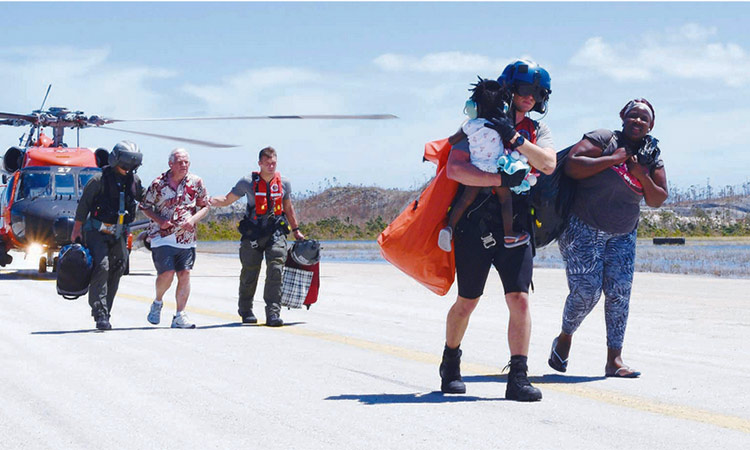