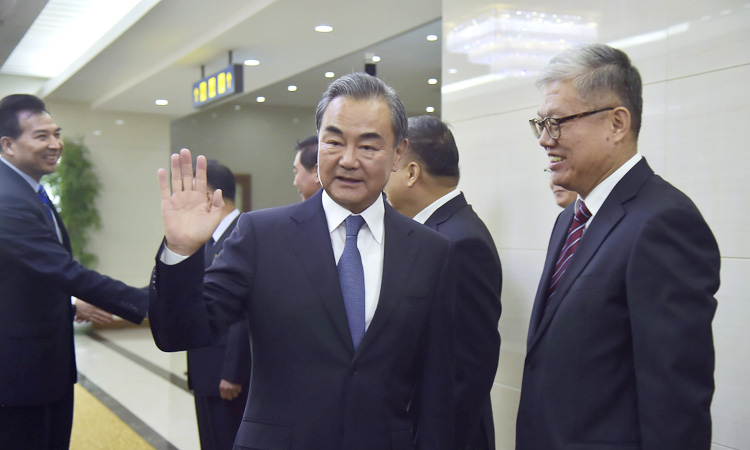 China reasserted its backing for North Korea on Tuesday as its foreign minister visited Pyongyang, vowing to maintain “close communication” with its longstanding ally in the face of deadlocked nuclear talks with Washington.

Beijing has long been North Korea’s key diplomatic backer and main provider of trade and aid, and while ties deteriorated over Pyongyang’s nuclear provocations and China’s subsequent backing of UN sanctions, the two have since worked to repair their relationship.

Chinese foreign minister Wang Yi arrived in Pyongyang on a three-day trip on Monday, just two months after Xi became the first Chinese leader to visit the North in 14 years.

Reflecting on their 70 years of alliance, Wang noted that Beijing and Pyongyang have “always been in the same boat and moving forward side by side,” it said in a statement.

Ri said that North Korea is willing to work with China to “promote greater development” of their relations in the “new era,” according to the document.

Pyongyang and Washington are engaged in a long-running diplomatic process over the North’s nuclear programmes although little progress has been made.

Those talks have been deadlocked after a second summit between Kim and US President Donald Trump collapsed in Hanoi in February with the two unable to reach a deal on sanctions relief and what the North might give up in return.

They agree to restart talks at an impromptu meeting in the Demilitarized Zone in June, but that working-level dialogue has yet to begin.

China always prefers stability in its neighbourhood and officially supports talks between the North and the US.

But Leif-Eric Easley, a professor at Ewha University in Seoul, said Wang’s visit “will raise concerns about their coordinating economic cooperation despite UN sanctions.”

“Beijing and Pyongyang may also strategise how to exploit widening divisions between Seoul and Tokyo and how to play the US election cycle,” he added, but stressed that North Korea wanted to avoid over-reliance on China.

“Despite signs of camaraderie, Kim isn’t choosing sides, he’s playing everyone off each other,” he said.

Beijing sent millions of troops known as “Chinese People’s Volunteers” to save the North from defeat during the Korean War, and Mao Zedong described their relations as “close as lips and teeth.”

Nowadays Beijing sees the North as a strategic buffer, preventing the possibility of US troops on its borders — 28,500 are stationed in South Korea.

The helicopter made a compelled touchdown right into a abandoned land close to the Kerala College of Fisheries and Ocean research close to Panagad.