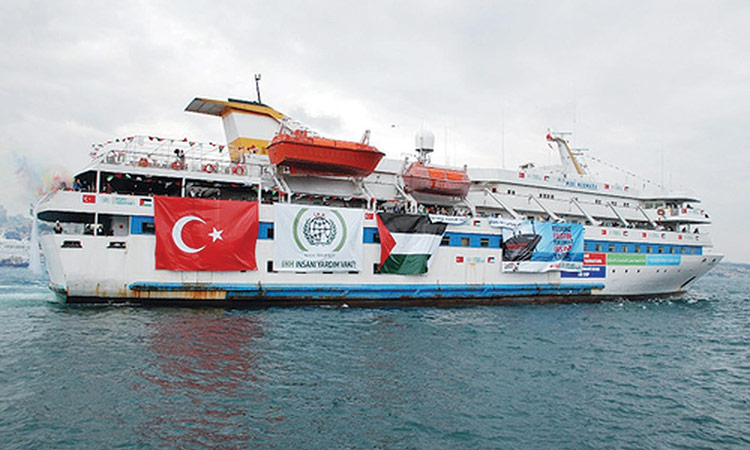 Turkish ship Mavi Marmara taking part in the “Freedom Flotilla” as it heads towards the Gaza Strip. File / Agence France-Presse

The International Criminal Court on Monday ordered the tribunal’s prosecutor for a second time to reconsider whether to press charges over a deadly Israeli raid on a flotilla carrying aid to Gaza in 2010.

In the latest step in a long-running legal battle at the court in The Hague, appeals judges told prosecutor Fatou Bensouda to decide by December whether to reopen the case.

“The prosecutor is directed to reconsider her decision by Dec.2, 2019,” presiding appeals judge Solomy Balungi Bossa told the court, adding that a majority of judges had backed the move, with two dissentions.

Nine Turkish citizens died in May 2010 when Israeli marines stormed the Mavi Marmara, among eight ships trying to break a naval blockade of the Gaza Strip. One more died in hospital in 2014.

The case was first filed in 2013 by the Comoros, the Indian Ocean nation where the ship was registered.

Bensouda said in 2014 that she would not prosecute Israel over the incident, saying it was “not of sufficient gravity” - which means the case could be determined as inadmissible before the ICC.

Bensouda again affirmed the decision in 2017 after judges said she must take another look at the case. Israel itself is not a party to the court but its nationals could still be prosecuted.

But in a fresh setback for Bensouda after a number of high-profile failures, appeals judges ruled on Monday that she must once more examine whether to bring charges before the Hague-based court.

The appeals judges criticised Bensouda in unusually strong terms, saying she had “incorrectly assumed” that she could disagree with the legal terms set out by pre-trial judges.

“The unfortunate language used by the prosecutor to express her disagreement demonstrates that she was entirely misinformed as to what was required of her,” the judges added.

But they stressed that the “ultimate decision” on whether to lay charges rests with the prosecutor.

Ties between Israel and Turkey crumbled after the raid but they later agreed to end the row after secret talks.

Israel offered an apology over the raid, gave permission for Turkish aid to reach Gaza through Israeli ports, and a payout of $20 million (18 million euros) to families of those killed.