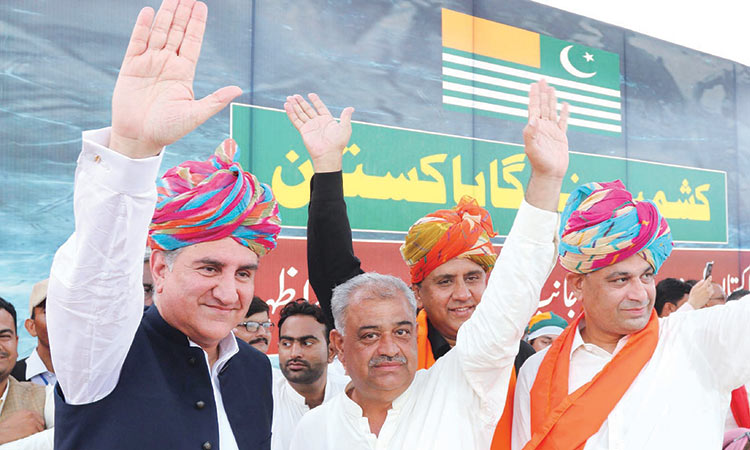 Shah Mehmood Qureshi (left) waves to supporters on the Kashmir solidarity gathering organised by the Hindu community in Umerkot on Saturday. Agence France-Presse

Foreign Minister Shah Mehmood Qureshi has said that Pakistan could hold talks with India over the issue of occupied Kashmir if New Delhi meets certain conditions, including allowing him to meet the Kashmiri leadership.

In an exclusive interview with BBC Urdu, he said Pakistan had no objection to holding bilateral talks with India and that it would also welcome mediation by a third party.

Qureshi said the talks could take place if India lifts the crippling curfew that has been imposed in occupied Kashmir for nearly four weeks, restores the rights of local residents, releases the entire imprisoned Kashmiri leadership and allows him (Qureshi) to meet with the Kashmiri leadership.

But he added as a caveat that while Pakistan has never shied away from talks, he did not see a favourable atmosphere for negotiations from the Indian side considering New Delhi’s oppression of the Kashmiri people.

“There are three disputes to this conflict: India, Pakistan and Kashmir,” Qureshi said. “I think if India is serious it should first set Kashmiri leaders free and allow me to meet the Kashmiri leadership and hold consultations.

“I will have to assess Kashmiri leaders’ emotions. We cannot come to the table for talks by trampling the sentiments of Kashmiris.”

Ruling out war, the foreign minister stressed that Pakistan has never adopted an aggressive policy and always prioritised peace. “A war will cause loss of people and the world will be affected by it, so war is not an option,” he said.

He added, however, that the armed forces and people of Pakistan are ready if war is “imposed” on Pakistan like on Feb.26 earlier this year.

He also made it clear that Pakistan had no intention of war with its arch-rival India. He insisted that Pakistan never adopted an aggressive policy towards its neighbour, rather always preferred peace.

He said the ruling Pakistan Tehrik-e-Insaf (PTI) during its first year in the government made several offers of dialogue to India for resolving the Kashmir dispute as the two nuclear-armed neighbours could not afford to risk war. “War will bring destruction for people and the world. Therefore, war is no option.”

“In response to the Indian aggression on February 26, Pakistan acted befittingly on Feb.27. Two Indian planes were downed and an Indian pilot was arrested. Pakistan also successfully tested Ghaznavi missile. So, the nation is prepared,” Qureshi insisted.

In an unrelated development, a Sikh girl who was allegedly abducted and forcibly converted to Islam in Pakistan has returned home to her family and the police have arrested eight people in connection with the incident, it has emerged.

The girl, identified as 19-year-old Jagjit Kaur, was allegedly kidnapped and forced to marry a Muslim man in Pakistan.

The Indian Ministry of External Affairs said on Friday that it received a number of representations from various quarters of civil society in India and members of Sikh religious bodies on the incident of abduction and forced conversion to Islam and marriage of the minor daughter of a Sikh granthi from Nankana Sahib, in Pakistan.

India’s reaction came as Pakistan was reported to have constituted a 30-member committee in relation to the case.

However, later the girl, who is now known as Aeysha, submitted her statement with a local Pakistani court under oath saying that she wilfully embraced Islam. She also refuted charges levelled in the police complaint filed by her parents.

In a video being circulated on social media, the girl Jagjit Kaur’s brother Manmohan Singh related how his sister was forcibly abducted and warned that unless she converted to Islam, her brother and father will be killed.

“She was forcibly converted. It is my appeal to Imran Khan and Gen. Bajwa to help us, and that my sister be brought back home. We apprehend that tomorrow such incidents should not take place on the Kartarpur corridor,” he said in one video.

The girl surfaced on Thursday after marrying a Muslim man.