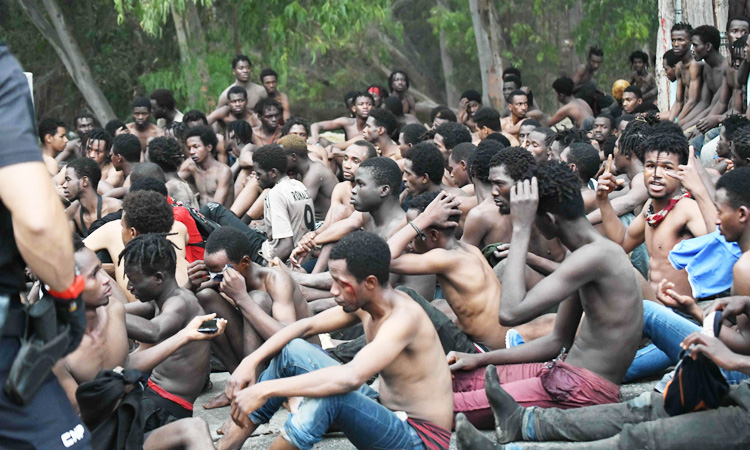 Migrants are arrested after they force their way into the Spanish territory of Ceuta on Friday. Antonio Sempere/ AFP

A group of 15 rescued migrants arrived in Spain on board a Spanish warship on Friday after Italy refused to allow the rescue vessel that had picked them up in the Mediterranean Sea to dock at an Italian port.

Reuters witnesses saw the migrants, part of a larger group of over 100 people rescued by Spanish-registered boat Open Arms and then stranded off Italy for three weeks, walk ashore in the port of San Roque in southwest Spain and board a bus under police escort. 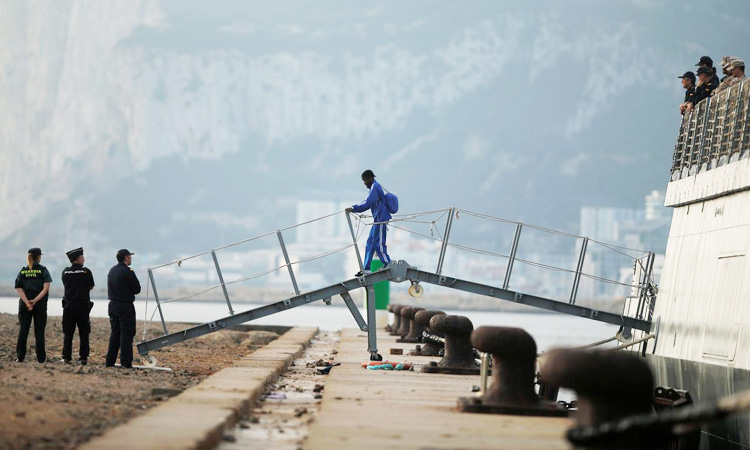 A migrant leaves the Spanish military ship ‘Audaz’ after arriving from an Italian port near Algeciras, Spain on Friday. Jon Nazca/ Reuters

The 15 migrants - 14 men and a woman - will undergo health checks and will be granted provisional permits until their asylum applications have been resolved, Spain’s government said in a statement.

Madrid dispatched the ship last week to pick up the migrants, all of them Africans, after five EU countries agreed to take them in following a prolonged standoff between the Open Arms and Italian authorities.

Italy’s outgoing far-right interior minister, Matteo Salvini, has banned ships carrying illegal migrants from docking at Italian ports in an attempt to stem the flow of people trying to cross the Mediterrean to Europe from north Africa.

Rights group Amnesty International said this week the Open Arms saga - one of a number of similar cases - underlined Europe’s failure to come to grips with the migration crisis.

The handling of the issue by Spain’s caretaker Socialist government drew criticism at home during a special parliamentary session on Thursday. Some parties rapped the government for accepting the migrants and others for not doing so more quickly.