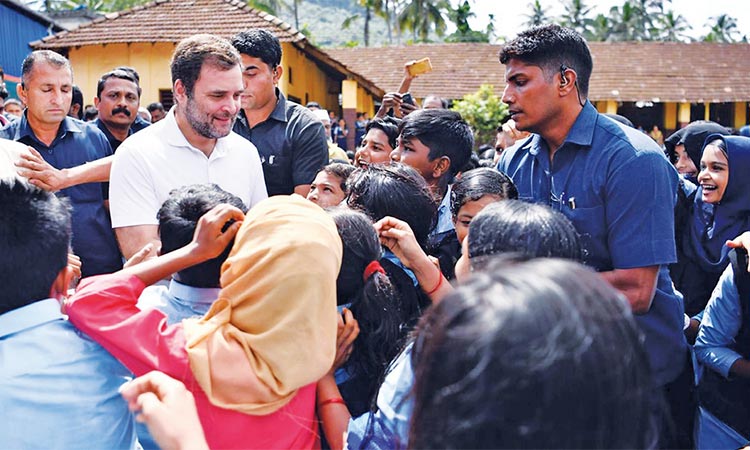 Ashraf Padanna
Congress leader Rahul Gandhi on Friday wound up a four-day visit to his flood-ravaged Wayanad constituency and invited Prime Minister Narendra Modi to come and see the devastation.

The former Congress president also termed it “unfair” that Kerala is still suffering and waiting for a relief package similar to those given to other flood-hit Indian states.

Gandhi was replying to a tweet by Modi in which he recalled his last visit to the famous Guruvayur temple, soon after his re-election for a second term with an improved majority.

“After your visit to Guruvayur — a huge flood visited Kerala, causing death & destruction. A timely visit then would have been appreciated,” Gandhi tweeted.

“Kerala is suffering & still awaits a relief package, like those given to other flood-hit states. This is unfair.”

He was responding to a quote from the speech of Modi delivered at the Malayala Manorama Conclave in Kochi through video conferencing from his office in Delhi earlier in the day.

“Kerala is also special for me, personally. I have had numerous opportunities to visit Kerala,” Modi had said. “One of the first things I did after the people blessed me yet again with a big responsibility is visiting the Guruvayur Sri Krishna Temple (in Kerala).

More than 100 people were killed or missing from Gandhi’s constituency comprising Wayanad and parts of Malappuram and Kozhikode districts.

Addressing marooned villagers taken refuge in a school, he said he had informed Modi and Kerala Chief Minister Pinarayi Vijayan that compensation and relocation needs to be done fast and quick.

He urged workers of the United Democratic Front (UDF), which his party leads in Kerala, to put pressure on the state government to ensure that compensation and relocation of flood victims are done quickly and fast.

He said he could not help but salute the spirit of people, especially children, of Wayanad.

“Yesterday, I met a little girl who was standing in front of her damaged house but still had a smile on her face. I asked her if she was scared during the floods and her reply was no,” he said.

He wanted Wayanad to be developed as an eco-friendly and sustainable model of tourism destination providing jobs to the local communities.

“It is a very beautiful place. You can see beauty everywhere, and it has tremendous tourism potential. We should try and make Wayanad tourism centre for the country,” he said.

“I love Kerala, but when people say god’s own country, they should think of Wayanad. There are many things that can be done to improve the tourism potential and to make sure that these youngsters have jobs in the future in Wayanad.”

He said the development should focus on connecting his constituency with the world and developing it as an ecologically sustainable destination, though there are issues of road connectivity was there.

“If we want development,” he said, “we have to connect Wayanad with Kerala and with the rest of the world.”

He assured the people of his constituency that he would raise their problems in Parliament and said he had raised the issues faced by farmers in the region in the Lower House.

A large number of people, mostly women and children, lines up the way he travelled along with the flood-hit areas along the length and breadth of his constituency. He also distributed food and essentials in the relief camps.

He heard them patiently and said it was a learning experience for him and was moved by the spirit of the people who are bouncing back cutting their losses.

He trekked to hamlets of ethnic tribes, Cholanaikans, who lead secluded lives in caves and dense forests. For them, he was the first leader to visit their hamlet.

He sat with people and heard them patiently. At times, he appeared emotionally moved.

He also refused to react to media enquiries about Kashmir and other burning national issues saying, “Look I am in Wayanad to meet my people. I don’t want to divert my attention. I will not talk about anything other than Wayanad.”

“It is a great honour for me to represent Wayanad in Parliament. My aim is to develop a relationship with you, of love and affection. You will see me soon taking up your issues in Parliament. I will be with you, and I will come frequently,” he said before concluding his visit. 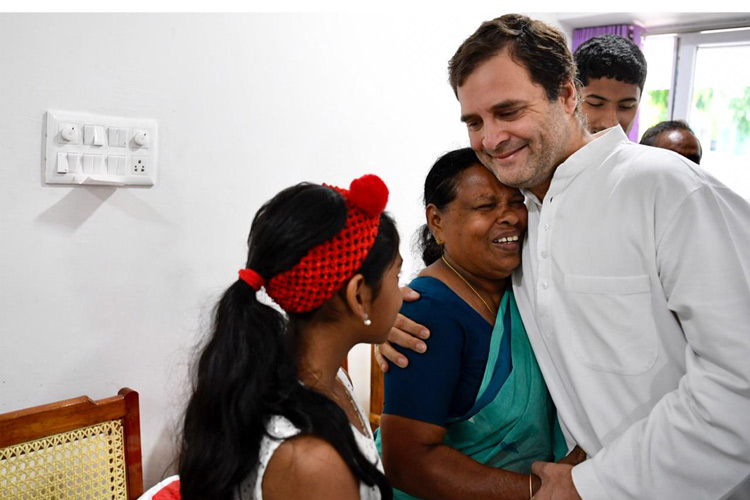 In Wayanad, Rahul hugs nurse Rajamma who was present when he was born

Rajamma told Gandhi it was neither Rajiv Gandhi nor Sonia Gandhi, but she who first cuddled him. Hearing this Gandhi hugged her again.