Any bid to delay or stop Brexit would do lasting damage: PM - GulfToday

Any bid to delay or stop Brexit would do lasting damage: PM 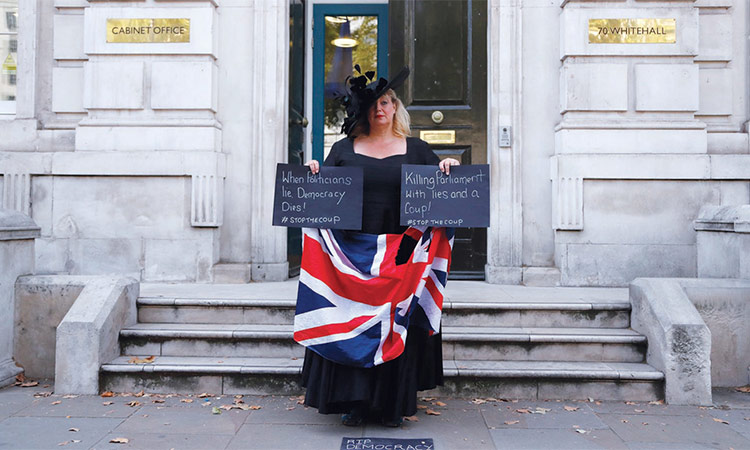 An anti-Brexit protester stands in front of the cabinet office in London on Friday. Associated Press

British Prime Minister Boris Johnson on Friday warned any attempt by MPs next week to stop Brexit or delay it beyond Oct.31 would do “lasting damage” to public trust in politics.

Johnson said Britons had decided to leave the European Union (EU) in the 2016 referendum and MPs had promised multiple times to uphold that decision.

“If we stop the UK from leaving on Oct.31, if that’s what parliamentarians end up doing, it will do lasting damage to people’s trust in politics,” he told Sky News television.

“It will do lasting and catastrophic damage to the major parties in this country. This political generation won’t be forgiven for failing to honour that promise.”

Opposition MPs and some lawmakers from Johnson’s own Conservatives have said they want to legislate to prevent a no-deal Brexit, which the government’s own assessment warns could cause food, fuel and medicine shortages.

But Johnson said that preparing for a no-deal Brexit would allow the government to clinch an agreement with Brussels.

“I’m afraid that the more our friends and partners think, at the back of their minds, that Brexit could be stopped, that the UK could be kept in by parliament, the less likely they are to give us the deal that we need,” he said.

Johnson on Wednesday moved to suspend parliament in the final weeks before Brexit in what was widely seen as a move to limit the parliamentary time for his opponents.

Queen Elizabeth II, on his advice, gave the go-ahead to shutter parliament between mid-September and Oct.14 — just two weeks before the Brexit date of Oct.31.

The move sent shockwaves through British politics, triggering a furious outcry from pro-Europeans and MPs opposed to a no-deal exit.

Wrong-footed, Johnson’s opponents labelled the suspension of parliament a “coup” and a “constitutional outrage.” The decision is being challenged in several legal cases.

Judge Raymond Doherty on Friday rejected a request for a temporary block on the suspension decision but will hear the full case at a further hearing in Edinburgh on Tuesday.

Former prime minister John Major, a strong supporter of EU membership, said he will seek to join a separate case in London, which is due to be heard in court on Thursday.

Britain’s Brexit negotiators are to meet their EU counterparts twice a week throughout September in a bid to reach a new divorce agreement.

Johnson said he wants to “step up the tempo” in talks with the EU to strike a new Brexit deal.

But there are growing concerns among some major players in the EU that Britain will not be able to come up with realistic alternatives in time.

A spokesperson for the European Commission said they were willing to work “24/7 throughout this long process.”

“We expect the UK to come forward with concrete proposals, as President (Jean-Claude) Juncker made clear to Prime Minister Johnson earlier this week.”

The backstop is included in a divorce deal that the EU agreed with Johnson’s predecessor, Theresa May, which Britain’s parliament has rejected three times.

Ireland’s Foreign Minister Simon Coveney said Britain had come up with “nothing credible” to replace the backstop.

Beyond the courts, Johnson’s opponents are planning other moves to stop him in his tracks.

Shami Chakrabarti, Labour’s chief legal adviser, warned on BBC radio: “We will use any means necessary to prevent this undemocratic behaviour — that includes people taking to the streets.”

Protests are planned on Saturday in several cities, with some organisers calling for roads and bridges to be occupied.

The leaders of the six opposition parties in parliament said they believed a majority of MPs were against Johnson’s move.

“The prime minister is shutting down parliament with the sole aim of stopping MPs from avoiding a no-deal Brexit,” they said on the suspension.

Opponents want to legislate to prevent Britain leaving the EU without a deal, and to stop the suspension of parliament.

They are also mulling a no-confidence vote in Johnson’s Conservative government, which commands a fragile 320 to 319 majority.