Gaza under state of alert after bombings - GulfToday

Gaza under state of alert after bombings 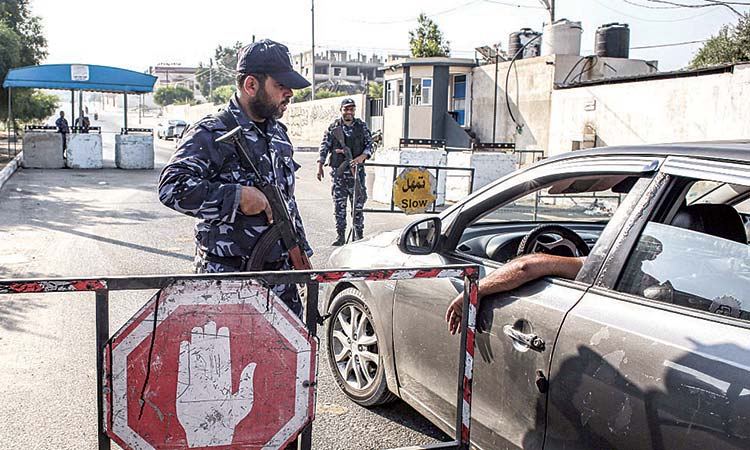 Security forces stop a vehicle at a checkpoint in Khan Yunis in the southern Gaza Strip on Wednesday. Agence France-Presse

Hamas said on Wednesday that two overnight bombings killed three Palestinian police officers in the Gaza Strip in what witnesses called suicide attacks as the Palestinian enclave was placed under a state of alert.

Witnesses said that both bombings were suicide attacks by assailants on motorbikes, but there was no official confirmation.

A source familiar with the investigation said a Salafist movement in Gaza, which is run by Hamas, that sympathises with the Daesh group was suspected.

Hamas’s interior ministry confirmed the three deaths, but spoke only of two “bombings” in Gaza City without providing details.

It said two of the police officers were 32 and the third was 45. Two separate police checkpoints were targeted, it said.

An investigation was underway as authorities pledged to track down the “masterminds.” New police checkpoints were set up in Gaza City.

“We assure our people that whatever these explosions are, they will be brought under control as with every previous event, and will not be able to undermine the stability and steadfastness of our people,” he said in a statement.

Hundreds gathered for funerals for the three police officers. Suicide bombings are rare in the Gaza Strip. In August 2017, a suicide bomber killed a Hamas guard in southern Gaza on the border with Egypt.

Hamas has run the Gaza Strip since 2007 but has been regularly criticised by more radical Salafist groups in the impoverished, Israeli-blockaded coastal territory.

The Israeli military said it had not carried out any air raids at the time of the latest bombings.

The bombings come at a sensitive time.

Israel and Hamas have fought three wars since 2008 and tensions have again risen in recent weeks ahead of Israel’s Sept.17 elections.

Israel’s military on Tuesday bombed a Hamas military post after militants in the strip fired a mortar round across the border, the latest in a string of such incidents this month.

On Monday, Israel launched air strikes against Hamas in response to rocket fire, while it also halved fuel deliveries to the enclave.

The punitive reduction in the flow of fuel to the strip’s main power station means a cut in Gaza’s already rationed electricity supply.