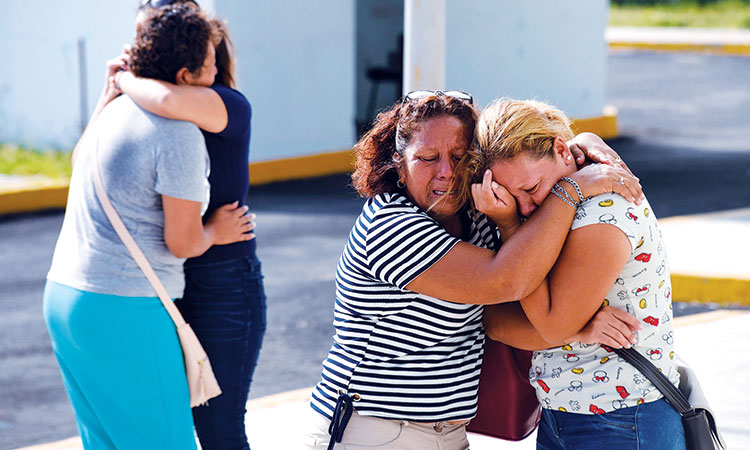 Relatives and friends of victims embrace each other in Coatzacoalcos. Agence France-Presse

Gunmen burst into a Mexican strip club in a hail of bullets and killed at least 26 people as they trapped revellers inside and started a raging fire, officials said on Wednesday.

President Andres Manuel Lopez Obrador condemned the “shameful” attack in the city of Coatzacoalcos, and said federal authorities would investigate evidence it may have stemmed from collusion between local authorities and organised crime.

The Tuesday night attack, which officials said also left 11 people badly wounded, is the latest to rock the state of Veracruz, a flashpoint in bloody turf wars between Mexico’s rival drug cartels and a hotbed of political corruption.

Survivors said gunmen sprayed bullets as they descended on the bar, the Caballo Blanco (White Horse), then blocked the exits and set the club alight.

Because of the loud reggaeton music pounding inside, many patrons and dancers did not even notice the attack until the bar was in flames, they said.

Authorities said many of the victims died of smoke inhalation. It was not immediately clear whether some died of gunshot wounds.

“They arrived in several vehicles, with rifles and pistols. They threatened the security guards at the door and took control of the entrance,” one survivor told an AFP reporter, speaking on condition of anonymity, as frantic relatives gathered at the bar looking for their loved ones.

Veracruz Governor Cuitlahuac Garcia tweeted that authorities had identified one of the attackers as Ricardo “N” − Mexican law bars the release of suspects’ full names − adding that he was a repeat offender known as “La Loca” (“The Crazy One”).

The suspect was previously arrested last month, but was released by state prosecutors within 48 hours, Garcia said. President Lopez Obrador said federal authorities would investigate why.

“There’s a problem there that needs to be investigated regarding the actions of the Veracruz prosecutor’s office,” said Lopez Obrador, a leftist elected last year on an anti-corruption platform.

“There are two things going on here: one is this shameful act by organised crime, the most inhuman thing possible; the other, which is also reprehensible, is a possible conspiracy with the authorities,” he told a news conference.