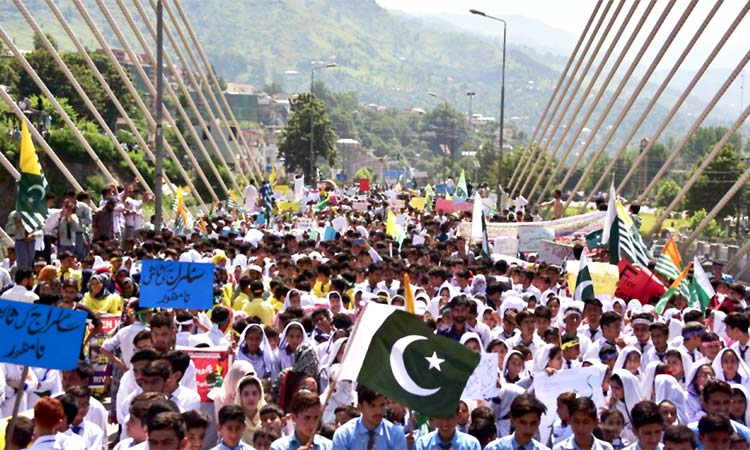 Foreign Minister Shah Mehmood Qureshi has dismissed India’s ‘all is well’ in occupied Kashmir mantra as “deceptive.” He was speaking at a seminar on ‘Annexation of Occupied Kashmir by Modi’s India: Challenges and Responses’ organised by the Senate Committee on Foreign Affairs.

US President Donald Trump, who has recently on a couple of occasions offered mediation on Kashmir dispute, after his meeting with Indian Prime Minister Narendra Modi on the sidelines of G-7 Summit in France said: “We spoke last night about Kashmir, prime minister really feels he has it under control.”

Indian government’s move to annex the occupied territory has been widely resented by the Kashmiris. In a bid to pre-empt protests against the revocation of Article 370 that ended special status for occupied Kashmir, New Delhi imposed a day and night curfew in the valley, which is now in its 22nd day, enforced a communication blackout, and troops presence was unprecedentedly increased. N

early 50,00 Kashmiris have, moreover, been detained.

The underlying thinking was to convey an image of normalcy to the world, but reporting from the region, despite heavy curbs, has suggested that the situation was otherwise.

The foreign minister said that the Modi regime was recycling ‘half-baked truths’ to delegitimise the indigenous Kashmiri struggle for the right to self-determination by equating it with terrorism and detracting the world’s attention from its inhuman repression of the uprising.

Qureshi called for amplifying the voices of Kashmiris and ending their sufferings. “Pakistan will go to every forum to ensure that Indian atrocities in IOK are halted and the dispute is resolved in line with the aspiration of the Kashmiris and the UNSC resolutions.”

Asking the world to play its role for preventing tensions over Kashmir, which he described as a nuclear flashpoint, from aggravating, he emphasised that silence on the issue was not an option.

“Indian aggression and hegemonic designs are a threat to regional peace and security and need to be taken seriously,” he said while underscoring that Pakistan did not want to escalate the situation and remains ready for ending confrontation.

Federal Minister for Human Rights Dr Shireen Mazari remarked that India was gradually climbing the escalation ladder and there had been a qualitative shift in the type of LoC violations.

She said that India was developing Bramos missile, which was a major concern for Pakistan because it was a supersonic technology with very little response time.

Senate Foreign Affairs Committee chairman Senator Mushahid Hussain Sayed said Kashmiris had been resiliently resisting Indian actions in the valley despite the brutalities being committed by the Indian government.

He thanked all those who have across the world spoken in support of the suffering Kashmiris and condemned Indian brutalities. He specifically noted Indian writer Arundhati Roy’s comment calling Modi government’s move as architecture of Indian fascism.

Experts fear an intensified arms race in South Asia if India alters its nuclear policy of no-first use (NFU).

They were speaking at a roundtable conference organised by the Centre for International Strategic Studies (CISS), an Islamabad-based think-tank that focuses its research on the strategic balance in the region.

The discussion was organised in the context of recent hints from the Indian leadership that it could end its policy of NFU of nuclear weapons.

The speculation about an impending change in India’s NFU policy was significantly renewed by Indian Defence Minister Rajnath Singh amidst heightened tensions between Pakistan and India in the aftermath of annexation of occupied Kashmir by the latter.

Singh, during a visit to Pokhran, the site of India’s nuclear tests, said: “Till today, our nuclear policy is ‘No First Use’. What happens in future depends on the circumstances.” He later reaffirmed that view through a tweet.

The CISS Conference looked at the possibilities of India changing its declared position on the NFU, the factors motivating Delhi to move in that direction, and its implications for the strategic stability of the region.