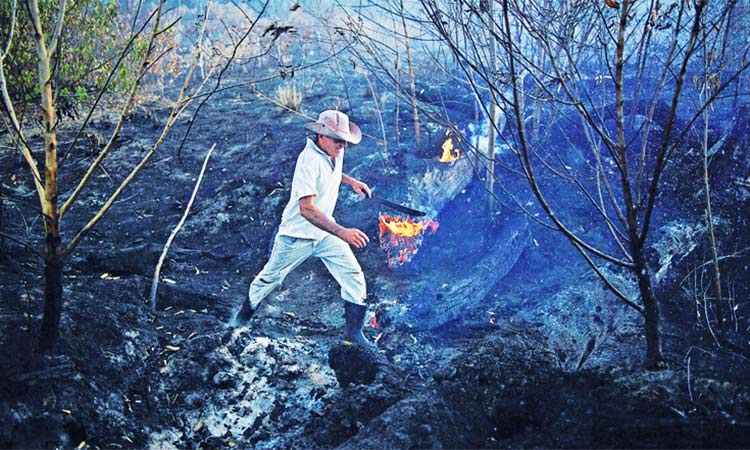 A farmer is seen in a burnt area of the Amazon rainforest near Porto Velho in Brazil on Monday. Agence France-Presse

Hours earlier, a top Brazilian official had rejected the G7 countries’ offer of $20 million to combat the fires devastating the forest in Brazil and Bolivia, saying Macron should take care of “his home and his colonies.”

“Mr Macron must withdraw the insults he made against me,” Bolsonaro told reporters in the capital Brasilia.

“To talk or accept anything from France, with the best possible intentions, he has to withdraw these words, and from there we can talk.”

On Monday, Macron condemned “extraordinarily rude” comments made about his wife Brigitte by Bolsonaro a day earlier.

Bolsonaro has hit back, accusing Macron of treating Brazil like “a colony or no-man’s land.”

The latest official figures show 1,659 new fires were started in Brazil between on Sunday and Monday, taking the total this year to 82,285 — the highest since at least 2013 — even as military aircraft and troops help battle the blazes.

More than half of the fires are in the massive Amazon basin.

Bestselling Brazilian writer Paulo Coelho took to the internet to apologise — in French — for Bolsonaro’s behaviour.

“As Amazonia burns, they have no argument except to insult, deny, say anything to avoid taking responsibility,” he added.

In the hard-hit northwestern state of Rondonia, thick smoke has choked the capital Porto Velho in recent days as fires blacken swaths of the rainforest.

Defense Minister Fernando Azevedo e Silva on Monday claimed that the fires were “under control.”

“It has been exaggerated a little that the situation was out of control — it wasn’t,” he said. “The situation isn’t simple but it is under control.”

Nearly 2,500 troops and 15 aircraft, including two C-130 Hercules, have been deployed, according to the defense ministry, which has published satellite data it says show a reduction in the number of fires in the nine states spanning the Amazon.

More than 43,000 troops were available to help put out fires, the government said previously.

Experts say increased land clearing during the months-long dry season to make way for crops or grazing has aggravated the recurring problem this year.

Although about 60 per cent of the Amazon is in Brazil, the vast forest also spreads over parts of eight other countries or territories, including the French overseas territory of Guiana on the continent’s northeast coast.

Bolivian President Evo Morales said on Sunday he would accept international help to combat wildfires raging in his country’s southeast.

Bolivia suspended election campaigning on Monday to deal with the voracious fires that have devastated more than 9,500 square kilometres  of forest and grassland. Weak rainfall is unlikely to extinguish the record number of fires anytime soon, with pockets of precipitation through Sept. 10 expected to bring only isolated relief, according to weather data and two experts.

While Brazil’s government has launched a firefighting initiative, deploying troops and military planes, those efforts will only extinguish smaller blazes and help prevent new fires, experts said. The rain forecast in the next 15 days is concentrated in areas that need it least, according to Maria Silva Dias, a professor of atmospheric sciences at University of Sao Paulo. Less precipitation is expected in parts of the Amazon experiencing the worst fires, she added.

The far northwest and west of the Brazilian Amazon rainforest will see more rain in coming weeks but the eastern parts will remain very dry, Refinitiv data show.

Even areas with more rain will only get isolated showers, the experts said.

“In some points you could put out some fires, certainly, but these are isolated points, it’s not the whole area,” Dias said.