No consensus on inviting Russia to G7 - GulfToday

No consensus on inviting Russia to G7 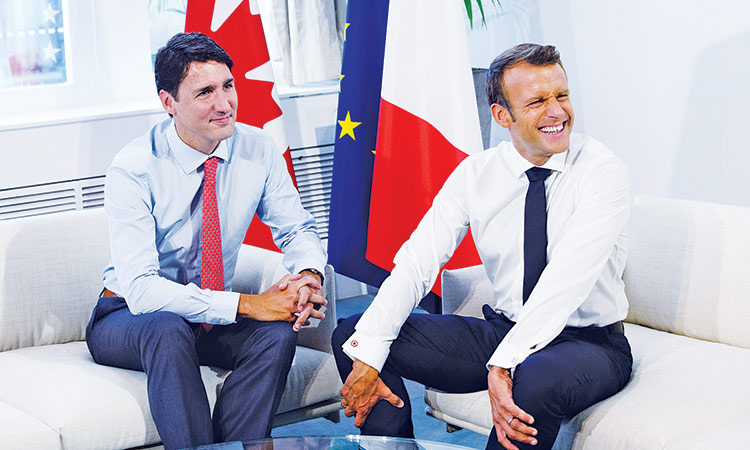 Justin Trudeau and Emmanuel Macron at the G7 Summit in Biarritz. Associated Press

French President Emmanuel Macron said on Monday G7 leaders had not reached a consensus on inviting Russia to next year’s G7 summit in the United States.

Macron added that he and German Chancellor Angela Merkel would organise a summit in the coming weeks with the Russian and Ukrainian leaders to obtain results on the crisis in Ukraine.

The future reintegration of Russia into the elite G7 group of the world’s rich nations divided leaders at its summit in France on Monday, as President Donald Trump pushed for Moscow to be allowed back after its 2014 expulsion.

Russia was kicked out of what was then the Group of Eight — even as Moscow was holding its presidency — after it annexed Ukraine’s Black Sea peninsula of Crimea, a move never recognised by the international community.

But US President Donald Trump, who will host next year’s G7 summit, said he would certainly invite Russia to the event, though he doubted his Russian counterpart Vladimir Putin would want to come if it was only as a guest.

And the host of this year’s event, French President Emmanuel Macron, has also said it would be appropriate to include Russia if key conditions concerning the conflict in Ukraine are met.

But Britain, whose ties with Russia hit a new low following the 2018 chemical poisoning on its territory of ex-Russian double agent Sergei Skripal, which London blamed on the Kremlin, has spoken out against Moscow’s readmittance.

The issue came to a head during lengthy discussions at the first official G7 dinner on Saturday, where the premiers and heads of state − also including those of Germany, Japan, Italy and Canada − put forward “forthright” positions on the issue, said a source close to the discussions, asking not to be named.

“You did very well last night, President Macron,” Johnson told his French host on Sunday as the leaders met for a session to discuss the world economy. “That was a difficult one.” Sources later confirmed that Johnson had been referring to Macron’s stewardship of the dinner in the debate over Russia as the leaders pushed their “strong” views on the matter.

Diplomats said the leaders were generally in favour of reinforcing coordination with Russia, but felt it was too early for reintegration.

“I’d certainly invite him (Putin),” Trump told a press conference as the G7 wound up on Monday.