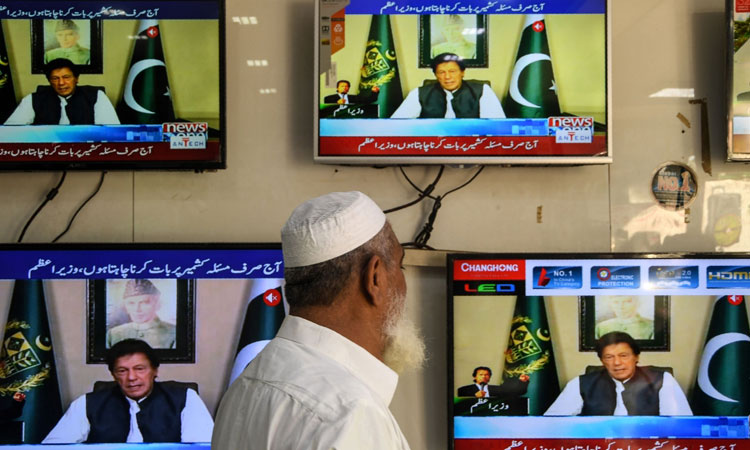 A man watches television as Imran Khan speaks to the nation on Kashmir issues at an electronic market in Karachi on Monday. AFP

Pakistan's Prime Minister Imran Khan on Monday claimed his Indian counterpart Narendra Modi made a "historic blunder" by revoking special status for Jammu and Kashmir and in doing so, he opened the way to Kashmir's "freedom".

Despite the world virtually shutting its doors to Islamabad's attempts to censure India, Khan made an address to the nation on the Kashmir issue and claimed "victory" on the diplomatic front.

"We won on the diplomatic front; we internationalized the Kashmir issue, talked to heads of states, their embassies (and) the UN Security Council called a session on Kashmir for the first time since 1965. We also kept raising this for the international media to report and they picked this up." He said it was the policy of his government to have peaceful relations with other countries, including India and Afghanistan.

"I told India we would take two steps forward if they took one. Our main issue is Kashmir. But every time we brought up dialogue with India, they diverted from the issue and levelled allegations against Pakistan." The cricketer-turned-politician said that both Pakistan and India were nuclear nations. "No one will win a nuclear war, but its impact will be felt globally."

Khan said that he would raise the Kashmir issue during the UN General Assembly on Sept.27 and meet world leaders in New York.

"First, I believe, the entire nation should stand with the Kashmiri 'awam'. I have said this that I will act as Kashmir's ambassador. I will raise the issue with heads of state and international media. I will tell them that this (Modi) is not an ordinary government but one which follows a dangerous ideology," he said.

"The western media has never criticised India as much as it is doing right now. I want to tell the Kashmiri people that whether the world stands with them or not, Pakistan will," he said.

His speech came as US President Donald Trump met Modi at the G7 in France and said that the Indian leader has told him the Kashmir situation was "under control" and that both neighbours can settle their issues on their own.