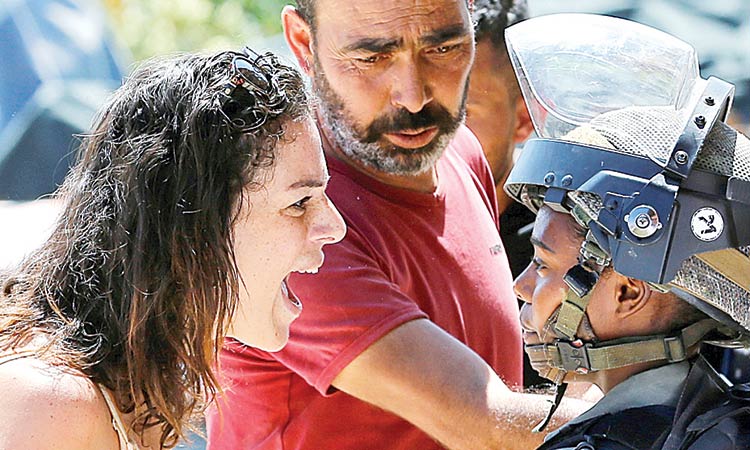 Israeli border policewomen try to evacuate a Palestinian woman out of a building before it is demolished in Beit Jala on Monday. Reuters

The strike came a day after an alleged Israeli drone crashed in a Hezbollah stronghold in southern Beirut while another exploded and crashed nearby.

The agency’s report said there were three strikes after midnight on Sunday, minutes apart, that struck a base for a Syrian-backed group known as the Popular Front for the Liberation of Palestine - General Command, an ally of the Lebanese Hezbollah militant group.

Abu Wael Issam, an official with the Palestinian group in Lebanon, told The Associated Press that the strike was carried out by Israeli drones and did not inflict any casualties. He accused the Israeli Prime Minister Benjamin Netanyahu is using such attacks to boost his credentials ahead of Israel’s parliamentary elections next month.

He said the Palestinian group’s “alternatives are open in confronting the Zionist enemy” but didn’t specify how or if it would retaliate. A statement issued later by the group “the Zionist aggression” will not stop the group and its allies.

There was no immediate comment from Israel on the strike, which the Lebanese news agency said hit near the village of Qusaya in the eastern Bekaa Valley. Airstrikes by Israel against Palestinian factions in Lebanon, such as this one, have been rare in the past years.

Hezbollah leader Hassan Nasrallah said on Sunday that his group will confront and shoot down any Israeli drones that enter Lebanese airspace from now on, raising the potential for conflict amid heightened regional tensions.

Nasrallah also vowed to retaliate to an Israeli airstrike inside Syria that took place late Saturday, which he said killed two Hezbollah members.

He said allowing Israel to keep flying drones over Lebanon would lead to a similar situation as in Iraq, where a series of attacks there targeting military bases and weapons depot belonging to Iranian-backed militias have left the country on edge. US officials say at least one of the airstrikes on the militia in Iraq was carried out by Israel.

In Saturday’s strikes near the Syrian capital, Damascus, Israel publicly stated it was thwarting an imminent drone strike against Israel by the Iranian Revolutionary Guard.

Hezbollah and Israel fought a month long war in 2006. The volatile border between the two countries, which remain technically in a state of war, has been mostly calm since that conflict.

Lebanon’s state National News Agency said “three hostile strikes” after midnight hit near the eastern town of Qusaya “where the Popular Front for the Liberation of Palestine - General Command has military posts.”

“They responded will a barrage of anti-aircraft fire,” it said. There was no immediate comment from Israel.

Qusaya is only about five kilometres (three miles) from the Syrian border.

The PFLP-GC has positions in Lebanon’s eastern Bekaa Valley as well as in Al Naaemeh just south of Beirut.

In July 2015, a security official said a blast at a PFLP-GC base in Qusaya wounded seven people, while the Palestinian group blamed it on an Israeli strike.

Raja said the latest attack was Israel “saying that it is able to strike the axis of the resistance wherever it wants” referring to anti-Israeli forces like Hezbollah and its ally Iran.

Meanwhile, Israeli Prime Minister Benjamin Netanyahu on Monday ordered hundreds of new settler homes to be built near the site of a bomb attack that killed an Israeli teen in the occupied West Bank.

The homemade bomb on Friday near the settlement of Dolev, northwest of Ramallah, killed 17-year-old Rina Shnerb and wounded her father Eitan and brother Dvir in what the military called a terror attack.

Israeli security forces have detained a number of Palestinian suspects but say the investigation is still under way.

An English-language statement from Netanyahu’s office said he ordered that plans be submitted at the next meeting of planning authorities for “the establishment of a new neighbourhood in Dolev with approximately 300 new residential housing units”. 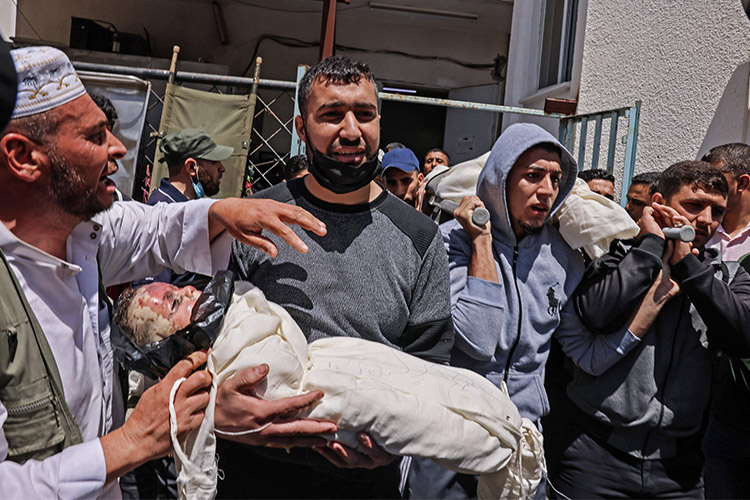