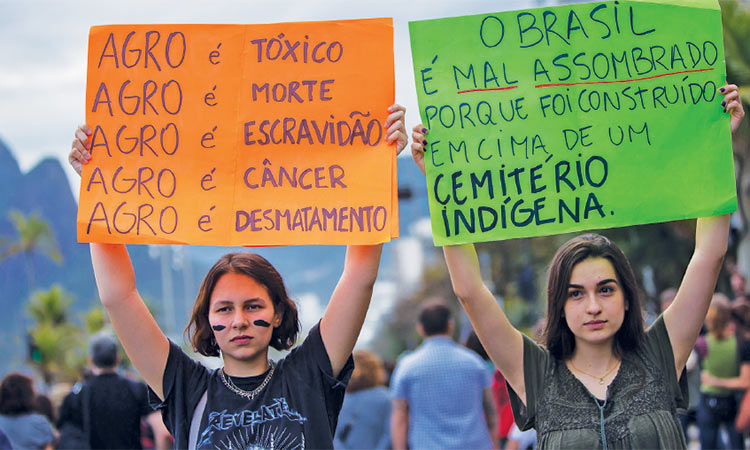 Activists hold placards as they take part in a demonstration demanding protection for the Amazon rainforest in Rio de Janeiro. AP

Hundreds of new fires have flared up in the Amazon in Brazil, data showed Monday, even as military aircraft dumped water over hard-hit areas and G7 nations pledged to help combat the blazes.

Smoke choked Port Velho city and forced the closure of the airport for nearly two hours as fires raged in the northwestern state of Rondonia where fire-fighting efforts are concentrated, amid a growing global uproar and a diplomatic spat between France and Brazil.

"In some way we're all passive smokers," said Sergio Pereira, head of a children's hospital in the city where more people than usual are seeking treatment for respiratory problems.

"The smoke can be really aggressive and the most affected are children and the elderly."

Two C-130 Hercules aircraft carrying thousands of liters of water on Sunday began dousing fires devouring chunks of the world's largest rainforest, which is seen as crucial to keeping climate change in check.

Swaths of the remote region have been scorched by the worst fires in years.

Seventy personnel -- firefighters and troops -- have been deployed to put out the blazes, the Rondonia government said Saturday.

Experts say increased land clearing during the months-long dry season to make way for crops or grazing has aggravated the recurring problem this year.

Brazilian President Jair Bolsonaro has insulted adversaries and allies, disparaged women, blacks and homosexuals, and even praised his country’s 1964-1985 dictatorship. Yet nothing has rallied more anger at home and criticism from abroad than his response to fires raging in parts of the Amazon region. 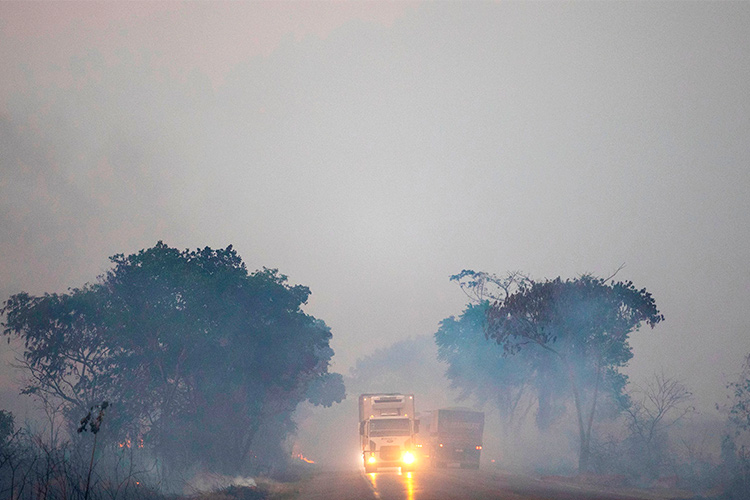 Smoke billows from a fire out of control along a highway in Nova Santa Helena municipality in Mato Grosso State, Brazil. AFP

In response, European leaders threatened to block a major trade deal with Brazil that would benefit the very agricultural interests accused of driving deforestation.

And French President Emmanuel Macron on Monday continued his feud with Bolsonaro, who had endorsed a Facebook post insulting Macron’s wife. Macron accused him of skipping a scheduled meeting with the French foreign minister in favor of a barber appointment and reiterating that Bolsonaro had lied to him. Macron said: “It’s sad. First for him and for the Brazilians.”

He said Brazilian women “are doubtless ashamed to read that about their president” and that he hoped the country would soon have a president who could behave according to the standards of the office.

The leaders of the Group of Seven nations announced on Monday they have agreed to an immediate $20 million fund to help Amazon countries fight wildfires and launch a long-term global initiative to protect the rainforest.

Bolsonaro finally took a less confrontational approach on Friday and announced he would send 44,000 soldiers to help battle the blazes, which mostly seem to be charring land deforested, perhaps illegally, for farming and ranching rather than burning through stands of trees. Some say it’s not enough and comes too late.