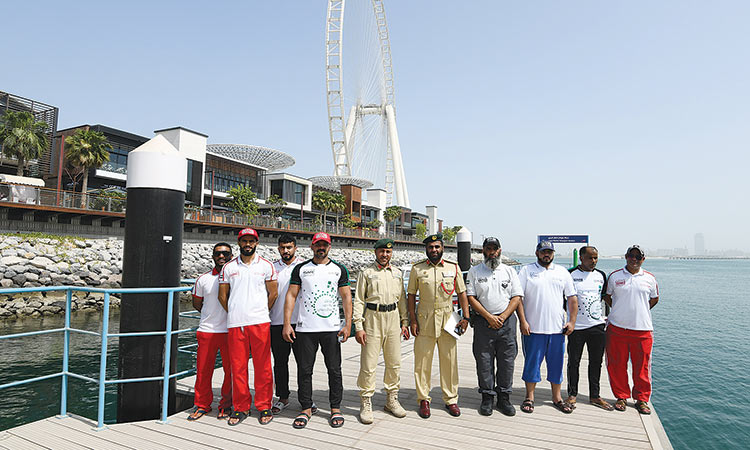 The Dubai Police force has recently set up a new response point affiliated with the Port Police Station at the “Dubai Eye” on the Bluewaters Island, JBR.

The new rapid response point has been established with the aim of enhancing mutual cooperation and coordination with the concerned security and emergency entities in order to ensure maritime safety and security, as well as providing rescue services on the Dubai shores and to respond swiftly and effectively in cases of emergency.

The Acting Director of Ports Police Station, Colonel Obaid Bin Hudaiba pointed out that the new checkpoint will contribute to strengthening Dubai police’s tasks and duties, in light of the growth in the tourism sector and watersports activities at the JBR. “The unit will play a vital role in secure marine races, official occasions and local and international tournaments,” bin Hudaiba explained.

Col. Bin Hudaiba added that Dubai Police now operate nine checkpoints for Maritime Security and Maritime Search and Rescue at various locations. “The new rescue point decreases the distance between Umm Suqeim rescue point and both Marina and JBR.  The fully-equipped response point has a security boat, a rescue boat, a navigator, two divers, a rescuer, two bicycles and a maritime rescue vehicle.

Recently, In less than 48 hours, the Dubai Police security teams arrested two Arabs involved in stealing bags and mobile phones from passersby in public places in Bur Dubai. The suspects reportedly were snatching belongings of victims and fleeing scenes riding a motorcycle to an unknown destination.

Maj. Gen. Khalil Ibrahim Al-Mansouri, Assistant Commander-in-Chief for Criminal Investigation Affairs, praised the teamwork displayed, reiterating readiness of the department and its field teams to deal with all events at all times with high accuracy and professionalism.